Remembering Shaq’s Steel. Was It Really That Bad? 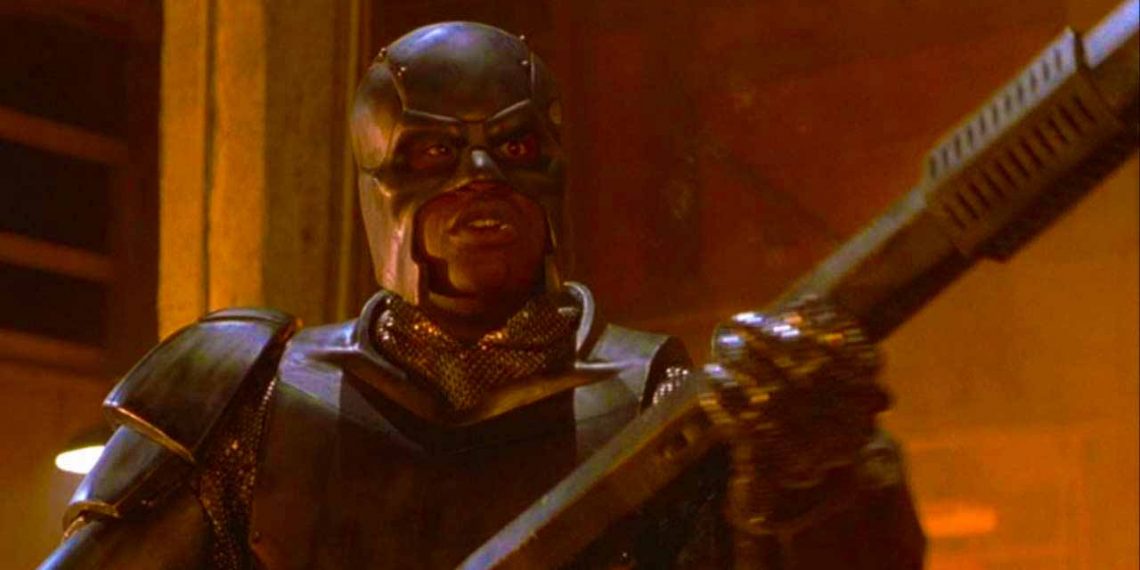 It was nearly twenty years ago when DC unveiled their other man of steel film. It was groundbreaking and could have ushered in a new era of superhero greatness for DC. Unfortunately, it bombed at the box office worse than almost any other superhero film, was critically panned and ratings-wise sits at a lowly 12% on Rotten Tomatoes. The strange thing is, looking back it really isn’t all that bad (if judged by TV movie standards of the day) and could have been DC’s first step in laying the groundwork for a cinematic universe, years before Marvel got a head start on them. The film, as you’ve probably guessed, was STEEL. 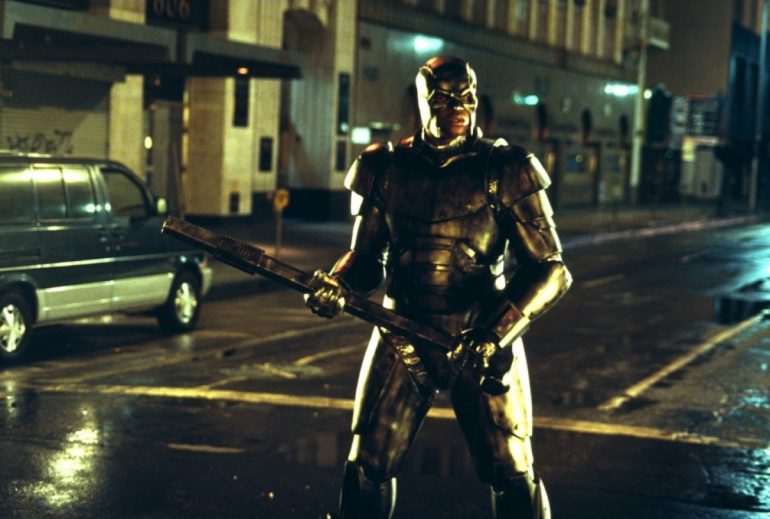 DC’s character of John Henry Irons/Steel made his major comic book debut after the death of Superman at the hands of Doomsday. When four new “Supermen” arrived on the scene all wearing the iconic S-shield, fans were asked which (if any of them) could be the real Superman. Of them all –  Superboy, The Last Son Of Krypton, The Cyborg and Steel – Steel was only one who came right out at the start and said he definitely wasn’t Superman. Yet, of all of them, he was only one who had the same moral code despite having no actual powers.

Instead, John Henry Irons was an engineering genius who specialised in making weaponry and constructed an armoured suit which granted him enhanced strength and abilities, including flight. When the real Superman finally returned, he applauded Steel’s work and respected him. Steel later became a valued member of the Justice League and played pivotal roles in some of the biggest crossover stories DC did. Well-liked, heroic, highly intelligent and an all-around good guy, Steel became one of DC’s best B-list characters.

He’s also one of their least original. Because in terms of ability and the suit he wears, he’s really just DC’s Iron Man only without the arrogance and the drinking problem. And yet Steel is still such a cool character that it really doesn’t matter.

Then, in 1997, he got his own film starring basketball player Shaquille O’Neal in the title role and directed by Kenneth Johnson. It’s the usual origin story, except that all of the Superman stuff was cut out of it. The Steel armour itself looked like the worst cosplay costume ever. He couldn’t do half of the things which he did in the comics, and the villain he squares off against was played by Judd Nelson… who might have been “harsh” in The Breakfast Club, but in this is about as menacing as a damp sponge. 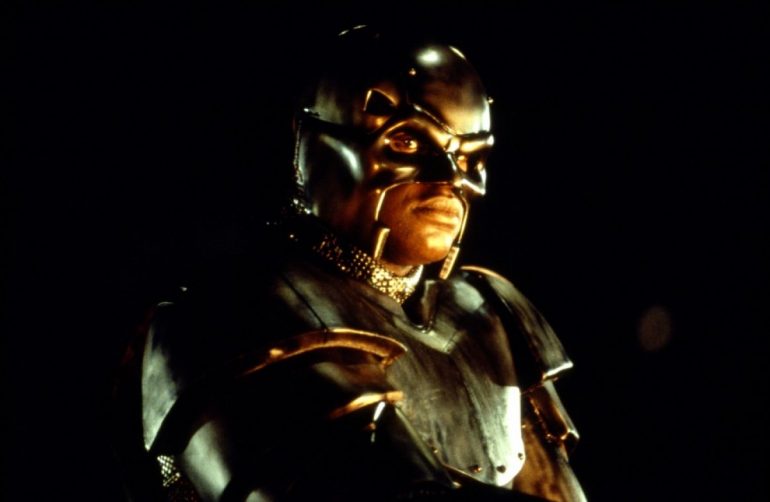 After leaving the army, John Henry Irons learns that his military weapons designs are being used by street gangs and recruits his friend Sparks to help build the Steel suit. They do this under the watchful eye of Uncle Joe, a Yoda-like figure who owns a scrap yard. Once outfitted, Irons/Steel takes his vigilante justice to the streets, becomes wanted by the police, and succeeds in stopping an international arms deal. And in the process, Steel is such a well-mannered superhero that those he helps actually refuse to identify him in a police line-up.

Sure, there are flaws all over the place. The acting from Shaq is pretty wooden, although there are a couple of little in-jokes about how lousy he’s always been at free-throws. The plot is weak, the dialogue generally woeful and the action scenes have everything except for action. It’s hampered by its low budget – given only about an eighth of the budget of Batman & Robin, made that same year – and what seems to be a lack of vision for what it could be.

Still, it means well and was made with the best of intentions. It’s a fun, feel-good, inoffensive superhero film with a moral that, if you’re good to others, others will repay your kindness in turn. He’s the nicest superhero out there and a good role model for kids (he even respects his grandma). His partner Sparks is a good representative for the disabled, very much as Oracle was for Batman, who doesn’t just hang around on the sidelines giving Steel information and building the suit but even gets involved in the action. 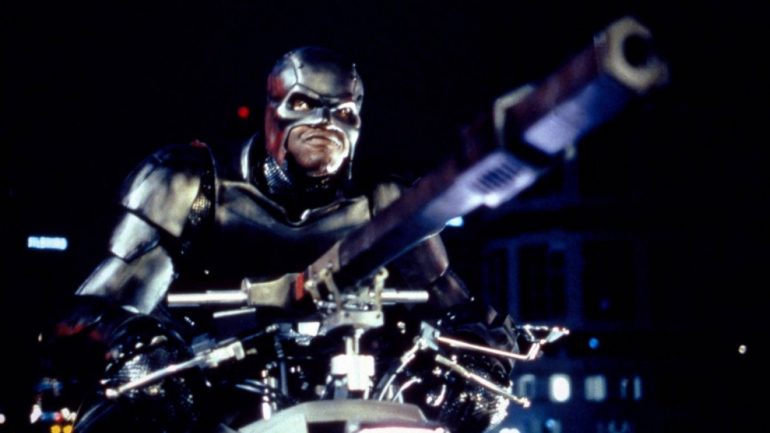 There’s also a rather thumping theme tune from Quincy Jones, despite it being set over a bland intro sequence of molten steel being poured which seems to go on forever.

There are good points, and watching it again now it’s actually not a bad little superhero film in its own right. It isn’t a blockbuster spectacular, but it’s aged better than some of its bigger-budget counterparts and could be a lot worse. But think about this… what could it have been?

With a little more work on making the suit look better, he could have been DC’s Iron Man over a decade early. If they’d stuck closer to the comic book origins, this could have been a proper introductory film into the DC Extended Universe, without even needing to focus on Superman properly. Just knowing the Man of Steel exists would have been enough. The villain in this is an arms manufacturer and dealer… and that worked for both Iron Man and Iron Man 2. Well, sort of. 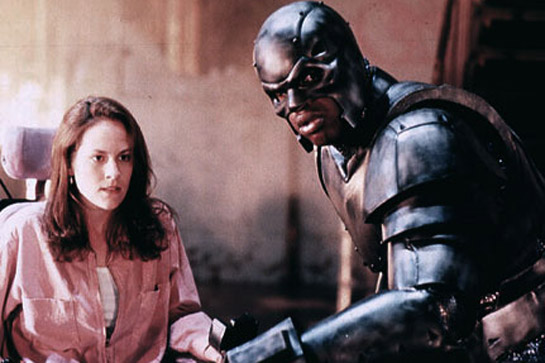 If the scope of the film had been a little bigger it would have held more impact. It didn’t have to be Man of Steel or Civil War big, but with a little more vision this film could have held more weight. Ant-Man figured that out and to some success. Irons and Sparks are fun characters, albeit cheesy ones, but a few lines of snappier dialogue could have made them DC’s Stark and Pepper Potts. Even with Irons being so straight-laced as a hero, it still could have been huge.

Sadly, it wasn’t meant to be. It was made at the wrong time, being released when superhero movies were on the decline and few people behind them had the confidence or the vision to make them the way they should have been made all along. There were no massive plans for the future at that stage, short of tentative steps to do a Death Of Superman film, and the next movie from DC was years later… and that was Catwoman, starring Halle Berry. That was the sorry state of affairs at the time.

Still, it could have been amazing. It could have been a bright start to a brilliant series of films. It could have been Iron Man, only better. So many elements in place which do work in this film: That theme tune is a great Superman-theme-meets-Shaft track; Annabeth Gish excels as Sparks, and her character works; While the villain is weak, he pulls off a move of pure evil which would make Lex Luthor proud as he tricks a henchman into eating something he shouldn’t; Even the moments of comedy hold together, and Irons trying to keep his secret identity when he’s the only 7-foot tall guy around is amusing.

Maybe, one day if you’re bored and need something to watch, you’ll give it a chance. Ignore the reviews, ignore the box office, just give it a chance. Don’t expect too much from it and it delivers some fun. And, afterward, reflect on what it could have been because this film had more potential than anybody probably ever realised.