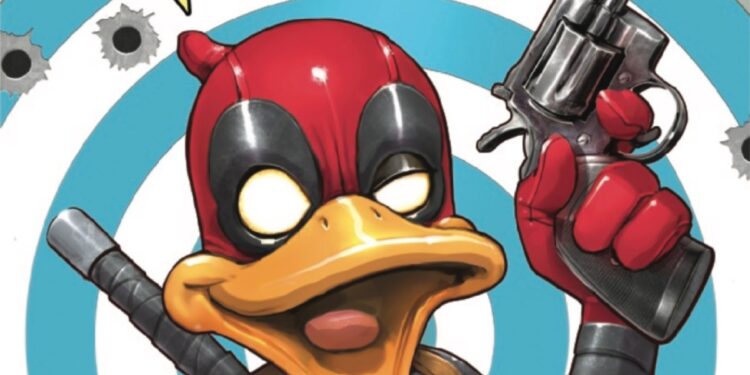 It’s the final issue, so what’s in store for our merged hero Deadpool the Duck? Obviously, you can expect him to return to his previous forms of Deadpool and Howard the Duck. Since Rocket Raccoon has been cured of his RABIEs virus, you know he’s going to get involved too. Plus there’s Doctor Bong, who’s up to his villainous ways once more. But you already knew all these things. So what’s new? We review Deadpool The Duck #5. Try Deadpool the Duck’s solution to his identity crisis. I won’t tell you what it is, but I can tell you that you wouldn’t want to try it yourself. It’s so disgusting that it turns Rocket’s stomach, and with good reason. Then there are Doctor Bong’s romantic gestures, which are equally disgusting since he’s really, really desperate for some action. There’s also a new job awaiting Howard, one which should keep him busy for a while. But can readers cope with all of this?

At its highpoint, this series has delivered some real gut-busting moments of comedy. At its rare lowest, it’s been pointlessly nauseating. Here, one of the central jokes revolves around a combination of both of those factors. It takes that old nauseating moment and takes it to the extreme, making it hilarious again. If that sounds confusing, let’s just say it’s like a South Park joke: it’s disgusting, but pays huge dividends. Equally funny is Doctor Bong, who comes across like the Doctor Evil of the Marvel U. His declarations of love are so poorly phrased and so ill-timed that it’s pure comedy gold. He’s even willing to share his fortress – something we at Fortress of Solitude feel strongly about – with his beloved… whoever she happens to be at any given moment.

As a stand-alone issue, Deadpool The Duck #5 would all seem a bit weak. Yet as the punchline to the joke which took four previous issues to set up, it works brilliantly. The writing allows the characters to feel perfectly natural and allows the story to flow smoothly despite its ridiculous nature. When Deadpool proclaims to be driving the driverless car, you know he’s right even if it makes no sense. Add to that the slick artwork and you’ve got a winner.

Deadpool the Duck may not have been for everyone. Some might even say that it’s the proof of the over-saturation of Deadpool since the movie spiked his popularity to the stratosphere. It’s understandable, with so many titles lately all trying to squeeze Deadpool’s square peg into their round holes (you know he’d joke about that). Yet this feels right. It’s exactly what both Deadpool and Howard the Duck are: snarky, irreverent, and most of all it’s a whole lot of fun.