After a bigly-great last issue, there’s a slight drop regarding the comedy in Deadpool The Duck #4. Or rather, it is there, but it requires readers to read between the lines on a few jokes, since some statements the characters make seem to come out of nowhere. It’s also a shame that a great deal of the comedy doesn’t come from Deadpool himself, but rather from the family gunfight which ensues as the issue progresses. You know the score by now. Deadpool and Howard the Duck have merged into one amazing being: Deadpool the Duck, the mallard with a mouth. Now, to paraphrase action classic The Last Boy Scout, he’s trying to save the life of the Rocket Raccoon who ruined his life and help SHIELD stop the bad guys, even though they’re the ones who got him into this mess in the first place. And if he succeeds in becoming two people again, one will be a mentally unstable psychopath and the other will be a manic-depressive complainer.

To make matters worse, Deadpool and his Howard persona don’t exactly see eye-to-eye, and there’s some debate about who should be in charge. A pep-talk from Howard goes badly, a stand-off between SHIELD and Roxxon turns out to be personal, and the brown stuff hits the fan completely when the mastermind orchestrating everything is finally revealed… However, there’s something here which Deadpool and Howard fans should both appreciate – and it isn’t the appearance of a villain who has links to both characters. Instead, it’s the darker sides of the two which are on display here and this issue scores for that.

There’s a general misunderstanding that Deadpool is a pure comedy character when the truth of the matter is that his comedy is grim and steeped in tragedy. Likewise, Howard’s best comedy value over the years has been dark satire, and when he isn’t rallying against the world he slumps into states of depression. Both are shown to the fullest here, especially in the first several pages where Howard shares a rather personal tale. It’s sad, but it symbolises Howard perfectly and gives the two characters some common ground. It isn’t quite The Drowning Man, but it’s still pretty impressive work.

If you were hoping Deadpool The Duck #4 would be a gut-busting laugh-riot, you’ll walk away disappointed. It’s a reasonably slow issue with some rather average action in the middle just to keep things moving.

However, if you’re willing to put aside a great deal of silliness and accept the balance between comedy and tragedy, then you’ll appreciate Deadpool The Duck #4 far more. It isn’t a better issue than the last one, or a worse one – it’s just a different type of issue, one which is a little more personal. What you get out of it depends on how you view Deadpool and Howard in general, so it may be up to you to decide. 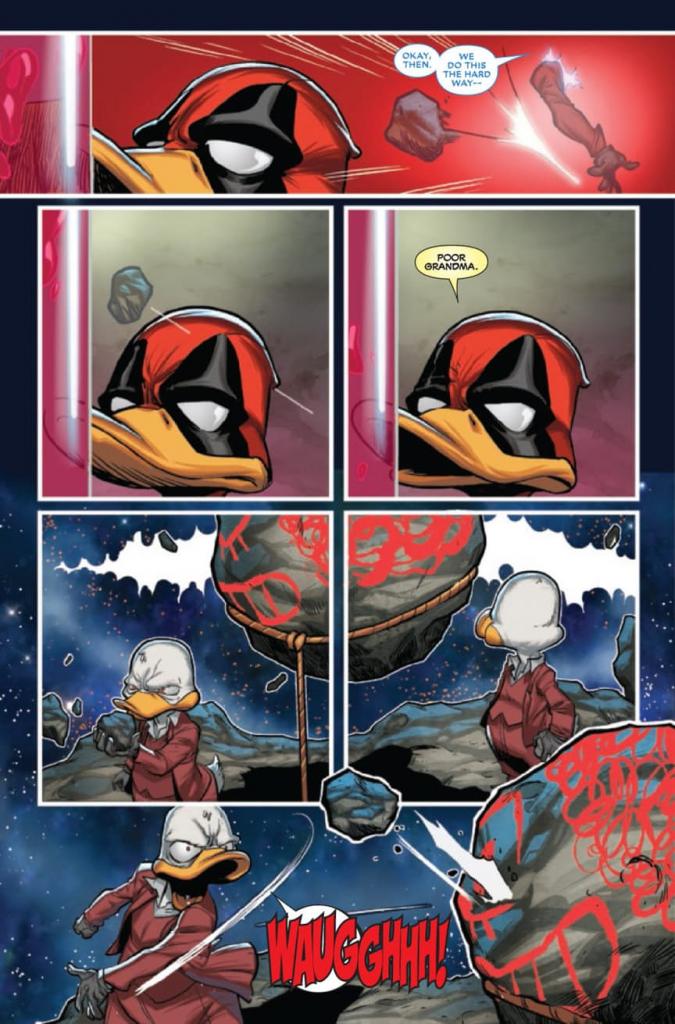