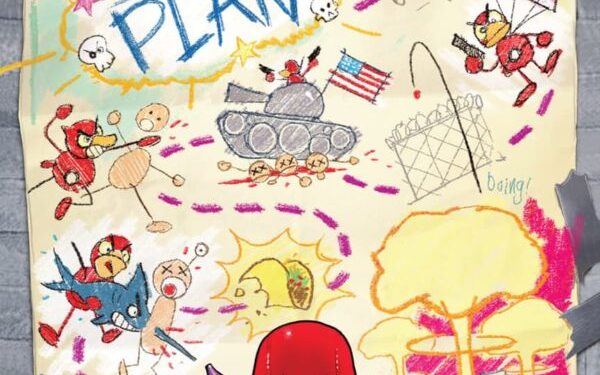 Deadpool the Duck is having a hard time lately. Ever since he came into existence as an accidental hybrid of Deadpool and Howard the Duck (thanks to Rocket Raccoon and a teleporter malfunction), he’s been trying to track down a cure to the space-rabies virus. That means that he’s gone into space, escaped from an exploding space station, and is now wandering about aimlessly from Roxxon research facility to Roxxon research facility. Oh, and he’s lost his old animal spirit guide, Wolverine. We review Deadpool The Duck #3. As for his new animal spirit guide, Howard the Duck, he’s now trapped in the Negative Zone and has decided to give up on Deadpool’s adventure completely. So what’s Deadpool supposed to do?! Well, giving a call to Agent Mary of SHIELD may help matters….

I’d like to take a break from the norm here (stop cheering “Norm!” – this isn’t an episode of Cheers) and say something personal. Writers, artists, and all those other creative dudes and dudettes who create all these wonderful comic books, films, television shows and so on… they’re artists and they care. They care so much that they even take the time to get in touch if they get a good review or a bad review, and we appreciate that.

The last review for Deadpool the Duck said that issue #2 was a step down from issue #1. Stuart Moore, the writer of Deadpool the Duck, rather nicely let us know that Deadpool the Duck #3 would be a “bigly great” improvement. Now, we’ve heard that before from other creators. Some have been right and others have been full of good intentions and hot air (and if any of them are reading, you know who you are). I can now tell you that Deadpool The Duck #3 was… bigly great. Yes, you heard me.

Stuart Moore, like Grand Funk Railroad, ain’t no liar. Or rather, getting away from those pesky double negatives, he was right. This issue was sly, sneaky fun and loaded with hilarious moments. From Howard’s stint as a cross between Captain Marvel and Tom Hanks in Castaway through to Deadpool’s interruption of a class which could have come from Village of the Damned, the humour was totally on point.

Plus, of course, there’s Howard’s impression of Logan which was so funny that it made me shoot milkshake out of my nostrils. That’s always a good sign. Jacopo Camagni’s art was bigly great too, from the small touches of having Howard address the readers in Deadpool style to the all-important flowing of action scenes. Every character was captured perfectly, creating a slightly cartoonish style which never seems too outrageous.

Okay, so this series may not appeal to you. Maybe you’ll find it too goofy or not heavy enough on plot or violence. But Deadpool The Duck #3 more than makes amends for the last one, and is more than reason enough for continuing with it. If you aren’t reading it then you should be. Now we’re bigly awaiting the next issue…