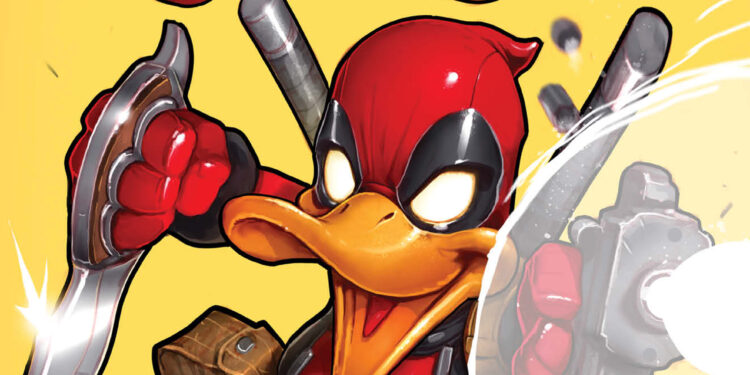 Sure, these days everyone knows Deadpool. He isn’t just Marvel’s merc with a mouth, he’s also the flavour of the month and continues to appear in just about every title on the shelves. Why? Well, in case you missed it, he’s also a highly successful movie star. Howard the Duck, by contrast, is a character whose movie was considered one of Marvel’s worst and, as a comic book character, only has a cult following. They couldn’t be more different. We review Deadpool The Duck #1. Deadpool The Duck #1 begins with Deadpool inspecting his new SHIELD-supplied home, advised by his animal guide inner voice, Wolverine. He’s also contracted by SHIELD to eliminate an extra-terrestrial who’s shown up, a job he takes with some initial reluctance. Meanwhile, Howard has decided to go on a road trip so that he can clear his head by getting away from the wreckage of a bad romance, as well as a world which is looking increasingly mad given the recent elections. His manic-depressive nature is kicking in again, and he’s starting to feel like a background character in the movie of someone far more successful.

When Howard gets attacked by the alien, he’s surprised by its appearance… because it’s a special guest star! Thankfully though, Deadpool is on hand to make everyone else’s life/movie a part of his own, by getting in some old-fashioned action. However, a malfunction with his teleporter leads to a moment straight out of The Fly, as Deadpool and Howard merge into one body… This has to be the finest, funniest, most gleefully wicked titles Marvel has put out in ages. It’s certainly better than both the recent Howard the Duck series and Deadpool/Mercs For Money series, with snappy dialogue and truly hilarious jokes on display. Every character acts naturally, while there are plenty of sly winks at the reader regarding their mixed fortunes over the years. While the plot is simple, the writing and art are both top-notch and the whole issue is pure entertainment.

Plus, there’s that special guest star, who shall remain nameless because it’s a complete surprise when they enter the story.

All that can be said regarding their identity is that it makes complete sense. It’s another Marvel character whose status has been elevated by recent movie stardom, and one who ties Deadpool and Howard together logically by being the middle ground. Read it and you’ll understand completely.

Deadpool The Duck #1 is a great way for Marvel to start the new year, and if you’re after a great laugh to set the pace then this is just what’s needed.