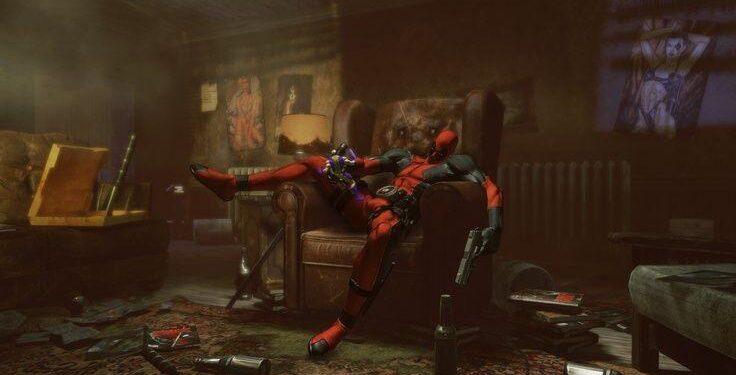 There are lots of things to see when visiting San Francisco. The Golden Gate Bridge. Alcatraz. Haight-Ashbury. The Mythbusters. The statue of Yoda outside Lucasfilm. That really steep street that Dirty Harry always seemed to get chased down. Then there’s the run-down home of Deadpool, Marvel’s Merc with a Mouth, known as the Deadhut. Except you really can’t go there, and even if you could you probably shouldn’t. Actually, you definitely shouldn’t go to Deadpool’s The Deadhut. Don’t let your eyes fool you. From the outside, it looks pretty decent, and the inside… hmm. At first glance, it looks like a nice, respectable place. The walls are nicely painted, there’s a nice carpet, framed pictures and mirrors, in fact, everything looks nice. This isn’t the sort of place you’d imagine someone like Deadpool to live at all, given his violent nature and a personality that borders between pure insanity and childlike impishness.

There’s a catch. None of what you’re seeing is real. It’s a hologram to fool anybody who dares to peek inside, something that every home should have. Unfortunately, once it’s switched off you get a look at what this place is really like, and you won’t like it. The few items of furniture are broken, the walls and ceiling have holes in them, the mirrors are all shattered and everything in it reflects the owner.

Along with keeping a rack of his costumes ready in what could sadly be called a lounge, you’ll also find an assortment of toys (both dismembered and some in mint condition – his fondness for collecting Happy Meal toys makes things cluttered sometimes) and some of his magazines (strictly for mature readers) show just how he lives. Deadpool isn’t a guy with a one-track mind, he’s got a thousand tracks and jumps from one to another quickly.

Then there’s The Box. If there’s one place in his home that defines Deadpool it’s The Box. It’s a room upstairs that’s only accessed by a ladder, and the door stays closed. It’s a room full of barbed wire, swinging pendulum blades and spikes, and it’s little more than a torture room. It’s also the room where Deadpool goes to punish himself when he thinks he’s done something wrong or is having an emotion that doesn’t quite sit right. Worse, it’s also the room where he sometimes put his faithful servant/friend/prisoner Blind Al and once punished his mate Weasel just for popping by for a visit.

I know, just the thought alone is awful and it was one of the most horrible moments in comic book history, even for a character with his chequered background. Still, as Blind Al pointed out, The Box is easily escapable if you know what you’re doing and she and Weasel got out relatively unscathed. However, when Deadpool goes in there he uses it to inflict great harm upon himself. It’s not all bad though, there’s a perfectly good basketball hoop on the roof and I’ve always wanted one of those, although in Deadpool’s case he uses it to beat Blind Al at the game. Since she’s an old lady and blind it’s hardly fair, but then that’s his way. The toilet is functional (although dirty), the kitchen seems okay and a good place to have a bowl of frosted sugar bombs (although beware, he regularly puts salt in the sugar bowl and sugar in the salt shaker just to mess about with Al) and the TV is functional (he allows Al to watch re-runs of Matlock).

Again though, why would anyone want a place like Deadpool’s The Deadhut? It’s barely habitable, is a target for villains and has almost no redeeming qualities. It’s messy, unsanitary and if it weren’t for Blind Al the place would be even worse. It’s the home of a madman, and a highly unpleasant one at that. So why?! Is it the view? No, the answer is far simpler than that: