Good Grief! DC’s Legends Of The Superheroes ’79 Is Painful To Watch

It’s time to look back at Legends of the Superheroes. And what a line-up of legends! The Flash! Black Canary! Hawkman! Green Lantern! Captain Marvel! The Huntress! And even… Batman and Robin! With a team like that, who needs Captain Cold?! And they weren’t taking on Vandal Savage, they were taking on Sinestro, Doctor Sivana, Giganta, Mordru, Weather Wizard, Solomon Grundy and The Riddler. What could possibly go wrong?

Try this for size: it’s a comedy. Worse than that, it’s a ’70s comedy. That means it has a laugh track too.

Filmed on a budget that makes Corman’s Fantastic Four film look generous, expect bad costumes, bad sets and bad acting. Don’t expect much in the way of the story either, because the second part of this is one of those awful “roast” comedy tributes.

00:01:03 Damn, it was all going so well. The characters sort of looked right until The Flash arrived. According to them, he’s the “joy of the oppressed” and faster than “Rapaylian Pot”. Or something. What?!

00:01:40 Yes, Adam West and Burt Ward are back as Batman and Robin! Sadly the years haven’t been kind to them.

00:03:05 It’s a super-villain convention and Solomon Grundy and others are definitely being played for (canned) laughs. That’s how this is going to go.

00:08:30 Things are no better for the heroes, as Batman pays tribute to Retired Man, a superhero who has now, um, retired.

00:09:51 So all the superheroes chipped in to get Retired Man a retirement gift, and it’s a cheap gold watch? Way to be a skinflint, mister fancy-schmancy billionaire Bruce Wayne.

00:12:03 So the heroes have split up to track down a doomsday device. It all looked impressive, except for seeing Sinestro manually sabotaging the Batmobile and Batman having a stone in his shoe.

00:15:03 Seeing Batman and Robin battle Solomon Grundy should be something that makes my inner-fanboy feel good. Instead, it wants to hide in shame. How could it possibly be this bad? 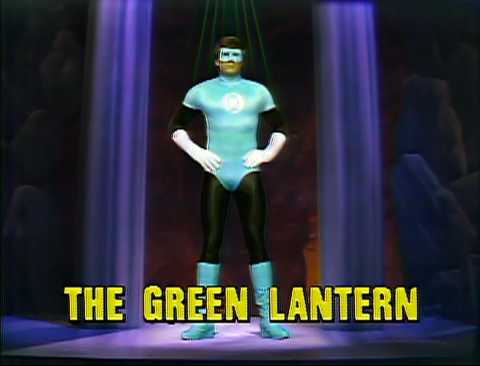 00:19:26 If you’re a Green Lantern fan you may not be impressed with Hal Jordan being outsmarted by a dopey Sinestro in drag. He says the oath, but… Imagine the Green Lantern movie. Now imagine it much worse. I know, that’s how much it hurts the brain.

00:24:13 Batman and Robin buying a used car from Weather Wizard… not quite as awful as it sounds. However, they have to settle for a motorbike and sidecar because Batman only has $50 cash on him. Now we know why he switched to using a credit card in Batman & Robin.

00:27:53 Credit where it’s due, Hawkman looks pretty badass and so does Black Canary. But his pipsqueak voice and her canary cry are no match for Solomon Grundy. Watch the hands, big fella!

00:28:58 Huntress just did something! She ran through a romantic picnic. Okay, so it isn’t much but it’s something.

00:33:15 I’d be annoyed that Captain Marvel just told the Riddler that his real name was Billy Batson, if not for the big red cheese being totally fooled by Riddler’s cunning plan of having an open-air psychiatrist’s office in the middle of a dirt road. Uh… Still, Frank Gorshin as the Riddler just did a great series of impressions. Better than nothing, I guess.

00:35:39 Captain Marvel just redeemed himself by using the Wisdom of Solomon to out-smart Grundy and then rescued Hawkman and Black Canary. 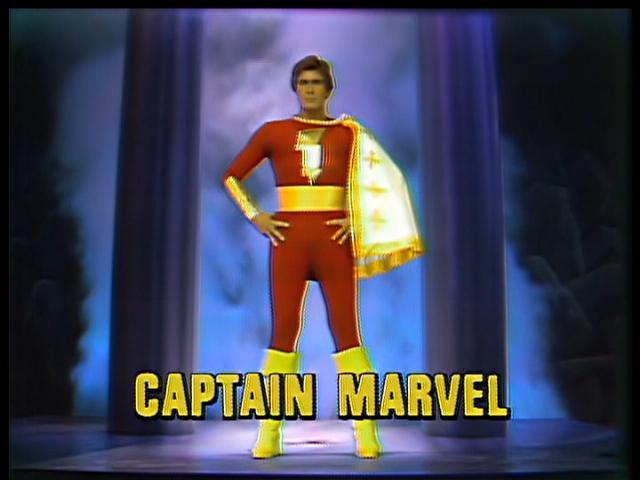 00:40:16 Take back what I just said about Captain Marvel. He’s so dopey that he just drank Doctor Sivana’s power-stealing potion thinking it was lemonade. So did Green Lantern. If it weren’t for Batman and Robin racing through that couple’s romantic picnic and ramping into a lake, all hope would be lost.

00:42:12 Mordru’s on a jet-ski! So are Batman and Robin, in hot pursuit. In third place seems to be the Flash in a kayak (at normal speed) and Green Lantern and Captain Marvel in a rowing boat. Black Canary and Huntress are lagging behind, having decided that the best vehicle for this high-speed chase is a pedalo. Words can’t describe how lame this is.

00:45:55 It’s back to the villain’s lair for a fight. Thankfully the odds are even because that dope Grundy put Sivana’s power-stealing potion into their champagne. Sadly there isn’t even a “biff!” or “ka-pow!” sound effects word balloon on screen at all…

00:48:33 …and hours after our heroes have saved the day, Retired Man shows up. He did almost as much as Huntress. Sigh.

00:52:19 With that so-called adventure now over, let’s enjoy the comedy roast. “I haven’t seen people dressed like this since I had lunch at Alice Cooper’s house!” Yeah, okay.

00:52:42 When an introduction says the MC knows his favourite superheroes, that’s good. When he adds that some of them got their powers by falling into a vat of liquid, that’s bad. Which ones were those again? NONE OF THEM! My head hurts.

00:54:11 Weather Wizard is their first guest speaker, and he just made it rain on the Flash. In their own lair. What kind of a comedy is this?!

00:57:53 All the way from Peoria, Illinois (but formerly Thanagar) is Esther Hall, Hawkman’s Jewish mother. Uh… Batman seems to be enjoying it though.

01:00:47 Terrific. Ghetto Man just showed up to represent the minorities, and he just did a rump-bump with Batman (who’s clearly digging this cat’s Seventies jive). Oh, the humanity…

01:05:59 After Ghetto Man’s routine, Doctor Sivana’s joke of giving all the heroes a physical is mild. Thankfully.

01:15:13 Gossip columnist Rhoda Rooter is questioning how The Atom and Giganta get sexually intimate. Somebody, please end this…

01:17:36 It’s a comedy routine for Adam and Burt, as Robin tries to hide the fact that he totalled the Batmobile from Batman. They’re still fun. The writing isn’t.

01:19:02 After a playful game of charades, Batman figures it out. Now he wants to punch Robin in the face. That’s not quite the Dynamic Duo that I remember but may have been the inspiration for Frank Miller’s All Star run…

01:26:20 Sinestro’s turn, and he’s just said that he grew up in a neighbourhood so tough that his parish priest was called Father Knuckles. Plus he just shot himself in the foot with his own power ring.

01:28:31 Legendary Captain Marvel villain Aunt Minerva has shown up (who?!) and wants to marry a superhero. Don’t ask what she says to Green Lantern, but it involves silicone implants.

01:32:41 Mordru has just appeared. Maybe he can redeem this whole awful mess.

01:33:41 Nope. He’s broken out into a song-and-dance routine of That’s Entertainment. Only with lyrics far worse.

01:36:10 In a song praising the bubonic plague and Jack the Ripper, it’s worth noting that he’s also tried to kill the superheroes…

01:36:46 …but gets stopped by Batman, who gives him a cream pie to the face. All the heroes can do is applaud, although I have no idea why.

01:38:48 It’s ridiculous that there’s a final speech saying that these superheroes have inspired us when it’s clear they’ve just been treated like a bunch of idiots. At least it’s over. I just wish it had happened sooner.

This is painful to watch.

I mean it. Not only was it an insult to comic book fans, it was an insult to viewers in general. It’s so horrible that it gave me a migraine, and I’m not exaggerating. Remember how in MST3K they were watching bad movies to find the worst ever made so that they could use it to break the human spirit? They should have used this. It’s genuinely one of the worst things I’ve ever seen.

There are those who say it’s just like a live-action version of Super Friends, but it isn’t. I watched that show and it was never this awful. Compared to this, Super Friends is like Avengers: Earth’s Mightiest Heroes.

Some of the jokes are too adult for kids and the rest is too stupid for adults, so who were they aiming this at? Masochists. That can be the only answer.