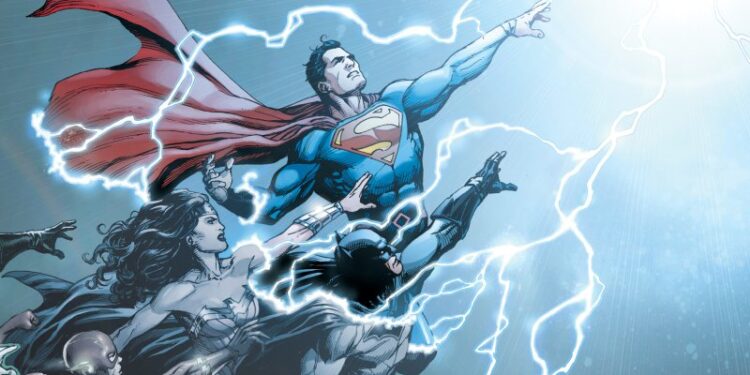 There was a lot riding on DC Universe: Rebirth #1. It promises to be the dawn of something revolutionary for DC, reaching across time to bring legacy and hope together for an exciting new future. Tugging at our heartstrings, it is a breath of fresh air and also a warm heartfelt apology to fans for straying from and abandoning the true origins of the iconic characters. Congratulations Geoff Johns. This is what we all wanted.

“Everything’s going to be all right.”
“Yeah? And how do you know that?”
“Because I’ve seen the future.”

These words echo the strong emotional pull at the heart of DC Universe: Rebirth #1. Johns is asking readers to sit back and listen as he goes about casting out the darkness that has plagued the DC universe for over a decade. It’s a love letter to fans of the old and the new. A light in the midst of darkness. Don’t call it a reboot. It’s not. It’s simply a new direction.

The story is narrated by an outsider of the current DC Universe. Voicing the opinions of many readers, he comments on the lack of emotions and history of the characters. He points out that things aren’t quite the way they’re supposed to be. The comic follows him as he reaches out to four characters (Batman, Linda Park, Johnny Quick and Barry Allen) in the current universe, trying to get them to remember him – it’s the only way he can return to that world. When he finally enters the New52 world, he warns Batman that something is wrong.

The twists and turns are great. There are few major reveals. You’ll find yourself in awe of the sheer brilliance of this comic. DC Universe: Rebirth #1 is well-written and beautifully illustrated. It’s a giant step. It’s a redemption. It’s a rebirth. It’s a rock solid foundation for the future. Once again, well done Geoff Johns. Mission accomplished.

This comic was sponsored for review by Readers Den.