How Bad Was David Hasselhoff As Nick Fury? 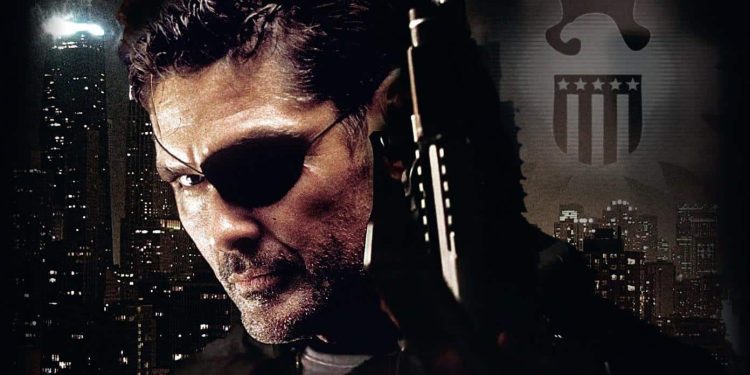 Nick Fury is one cool cat.

But before he started breaking and entering Tony Stark’s house, pretending to die while visiting Captain America, irritating all of the Avengers and complaining to Agent Coulson, he had a bigger problem: he was in a made-for-TV movie that also got released as a video.

Worse, Nick Fury was played by David Hasselhoff, an actor best known for patrolling beaches and talking into his watch a lot. 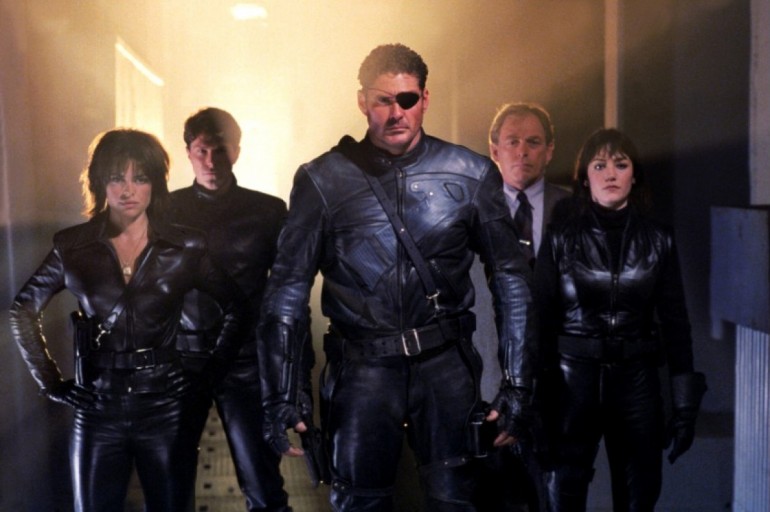 Yet don’t despair! Balancing that out is a script from David Goyer. Yes, that’s right, the man who helped write Christopher Nolan’s Batman films and a few of the more recent DCEU films. On the downside, he also wrote Ghost Rider and has some opinions about She-Hulk that have upset many comic book fans and Stan Lee! But did he get this right or wrong? Let’s watch and find out.

00:00:23 Dig that drum-and-bass tune with a high-speed shot over water just like in Miami Vice! And hey, Lisa Rinna from soap opera Days of our Lives is in this! Gee whiz!

00:00:49 And straight away we’re into some plotting. We’re at Trinity Base and Hydra boss Baron Wolfgang Von Strucker is in cryogenic suspension. Damn, if he doesn’t wake up soon he’ll miss Titanic!

00:05:25 Hydra’s really kicking ass. They’ve stolen the Von Strucker human popsicle and the lovely Viper has made a good entrance. What could possibly go wrong?

00:08:05 Oh, I forgot. It’s a David Hasselhoff movie. Still, he’s got the eyepatch and he’s chomping a cigar, even if he now appears to be retired and living in a mineshaft in the Yukon. Damn lousy SHIELD pensions…

00:10:58 Could Fury be any more insulting to his old flame? SHIELD agent Contessa Valentina Allegra… ah, her whole name would take too long to say. Let’s follow Fury’s example and call her Val.

00:11:34 Hot diggity! It’s a flying Helicarrier, and even if it’s ugly at least it hasn’t crashed yet. I’m guessing Maria Hill isn’t flying it today then. 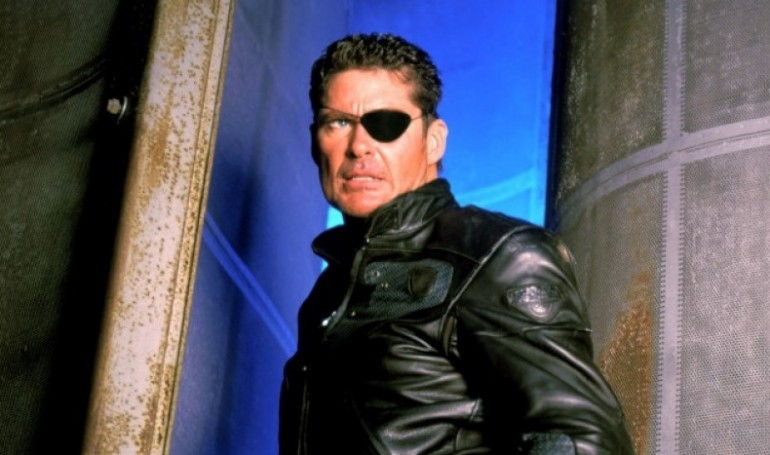 00:14:40 Within four minutes of being aboard the Helicarrier Fury’s smoked a cigar by a No Smoking sign, shot an awkward elevator security system and committed sexual harassment. I’m digging The Fury right now, but… where’s Dum-Dum Dugan’s moustache and bowler hat?

00:18:26 It seems like Gabe Jones and the SHIELD scientists get their clothes from the AIM store, but that hasn’t stopped them from inventing a gun with a safety feature like Judge Dredd’s and… an LMD?! Yes, they’ve beaten the new movies to the punch on showing a Life-Model Decoy.

00:21:13 Okay, so Von Strucker’s DNA has some lethal virus in it that can kill the world. But to activate it they need… Arnim Zola?! Groovy!

00:25:10 Viper really seems to enjoy being a villain, and is taking to it with Doctor Evil-type glee and over-acting. Also, she keeps stroking her little finger. Nope, nothing weird there.

00:29:03 Wow, Arnim Zola’s not looking too good. I get that he’s old, but he should really consider downloading himself into a TV or a computer or something and have a little camera on top of it…

00:33:30 Like a rank amateur, Fury fell into a pretty obvious trap. Viper, with one of those face masks similar to the ones in Winter Soldier and Agents of SHIELD, has poisoned Fury and got her hands on Zola. Score one for the bad guys.

00:39:39 Make that 2-0 for Hydra, as they’ve managed to sneak their own LMD on to the Helicarrier. Fury may be dying from being poisoned, but he’s still on the case though and spots it quickly. 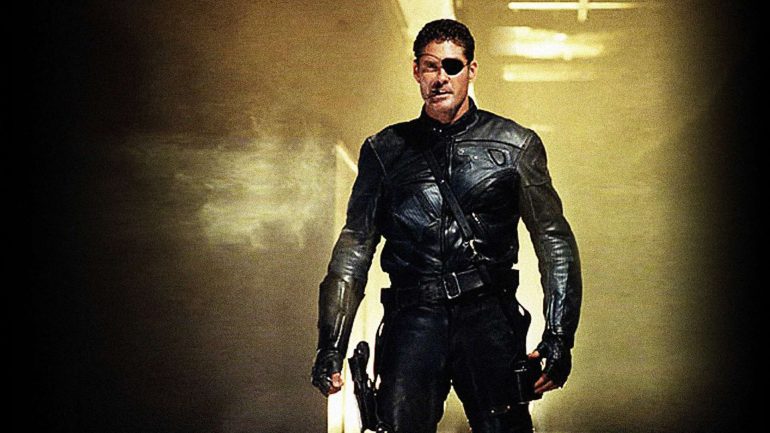 00:43:28 SHIELD is telling the US President that New York could be wiped out by a killer virus and are giving him advice, and he’s barely paying attention and signing documents? What kind of a world leader is this?! Oh, wait… he’s pretty much like all of them.

00:44:50 Say what you want about high-tech touchscreens on the new Helicarrier, you still can’t beat old-school consoles of flashing lights, toggles and switches!

00:46:05 So Hydra’s LMD motherboard was from a laptop on Unimak Island. Uh… Here’s a Fury Fact for you: Unimak Island is a real place! It has a whopping population of about 64 people, so their IT business must be booming now!

00:48:58 The guy running SHIELD just called Nick Fury a “comic book coward”. I’m guessing that’s supposed to be an in-joke, except it doesn’t seem all that funny.

00:52:51 Fury’s jet just got downed by a couple of heat-seeking missiles. That’s what he gets for smoking in the cockpit and blowing smoke up peoples’ hoo-hahs.

00:57:08 The Hydra base has one of those laser net alarm things, but SHIELD has a spray that creates a hole in it. Actually, that’s kind of cool. Is it okay to say that?

00:58:16 Dopey SHIELD agent British McNotJamesBond (or whatever his name is) has boasted about his skills all movie long. Now he tries to show them off and is instantly beaten up by some Hydra goon. That’s what you get for boasting, kid!

00:59:25 Viper’s modelling the new line in Hydra lingerie, available only from Arnim’s Secret. 01:01:52 Nick Fury’s eyepatch is concealing an electronic lockpick. Too bad Viper found it on him and took it away before she locked him up.

01:06:05 “Chief Surgeon to Head Nurse…” Dugan needs to come up with some better codenames. Also, they’re pointless if he keeps calling Head Nurse “Val”, like he’s done quite a few times now. Then Gabe calls her “Val” too, and she calls Chief Surgeon Dugan “Timothy”! So much for secrecy.

01:07:12 So Nick Fury and his team escaped using his explosive fake eyeball? Ah, why not?

01:13:19 Viper and Arnim Zola make a cute couple, even if he’s on a respirator and she’s obsessed with her frozen dad. The Red Skull would never have stood for such shenanigans!

01:20:28 Getting some abort codes to stop the bio-weapons hitting New York makes for great tension but… why would Hydra need abort codes anyway, since they were planning on releasing the virus no matter what? Just a thought.

01:21:51 Just when our heroes needed rescue, in flies the SHIELD cavalry. Unfortunately, it isn’t The Cavalry, from Agents of SHIELD. Damn. Agent May rocks.

01:23:07 Fury’s getting the cure for the virus in his system, but it seems like Viper has one last trick up her sleeve…

01:25:00 Safely back on the Helicarrier, Fury’s okay and sweating like crazy. So why did he just put his leather jacket back on?

01:27:50 Nick shares a moment with the Contessa and even decides he’s quitting smoking. What, is he getting soft in his old age? Pffft.

01:29:00 But wait! It isn’t quite over, as Viper and a defrosted Baron Von Strucker share a villainous, evil laugh together! Hooray! Happy endings for everyone! 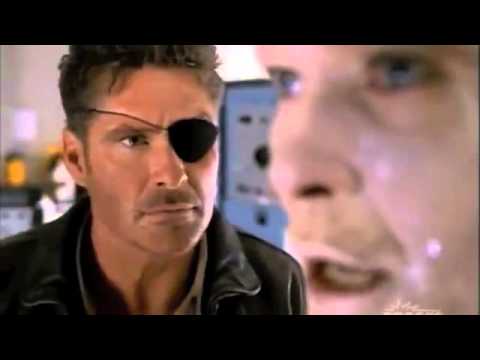 This is a bad movie. Not terrible, just dull.

Strangely though, it’s a bad movie full of good ideas which could have benefitted from being made today. Many of the elements are correct, from Baron Von Strucker and Arnim Zola to all the Hydra banners and even the LMDs. It all just fell apart in execution. With some more time, a little more talent and a better budget Nick Fury: Agent of S.H.I.E.L.D. could have been Marvel’s first real hit film. But it wasn’t and, instead, it’s relegated as a bad joke.

I remember when this movie was announced that Stan Lee said in one of his Soapbox columns that David Hasselhoff was the perfect choice to play Nick Fury. Stan’s always over-hyped everything Marvel so he was probably biased, but David Hasselhoff did capture some of Nick Fury’s snarky charm.

There have been far worse movie adaptations of far better comic books (I’m looking at you, Green Lantern!), so Nick Fury: Agent of S.H.I.E.L.D. gets an A for effort, even if it’s an F.

How bad was David Hasselhoff as Nick Fury? Pretty bad.