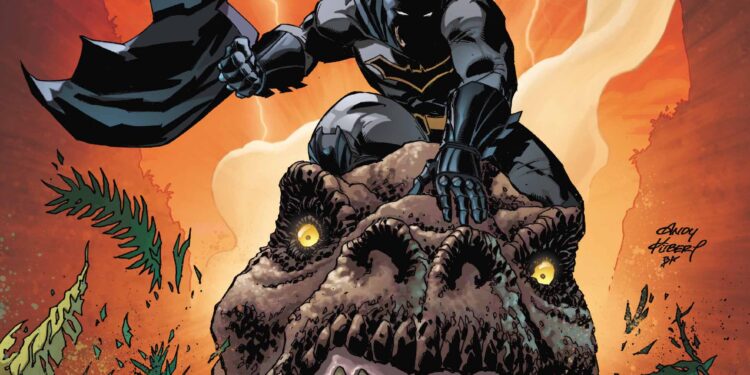 In June last year, DC Comics began a revolutionary new direction with DC Universe: Rebirth #1, a comic book that reached across time to reveal a shocking secret about the world of our favourite superheroes. Just over a year later, Scott Snyder and Greg Capullo’s Dark Nights: Metal does the same. Weaving together a mystery spanning all of human history, once again the DCU’s major summer event series is clouded in suspense and has far-reaching ramifications for its lead characters. As with The Forge and Casting did in the build-up, Dark Nights: Metal #1 focus on the Nth Metal and uses a lot of heavy metal imagery – horns, pentagrams and the sort. The story kicks off with a gladiator match and the Justice League, made up of Wonder Woman, Batman, Superman, Flash, Cyborg, Green Lantern and Aquaman, battling Mongul’s robotic monsters in a giant coliseum. Outnumbered, Batman conjures up a plan to defeat the metallic beasts by climbing into them and combining their parts to create a giant killing machine (think Power Rangers’ Megazord).

A few pages later, the group find themselves on a strange island learning more about the Nth Metal and facing off against Red Tornado. Always a step ahead, Batman manages to escape by riding a freakin’ dinosaur. If that weren’t enough, a turn of the page reveals a surprise that is bound to shake the core of the DCU.

Fresh off of All-Star Batman, Scott Snyder is invested in creating something truly special with Metal, and he really does. If the first issue is anything to go by, we can expect many surprising revelations. Dark Nights: Metal #1 boasts epic storytelling and really great art. It should fly off the shelves.