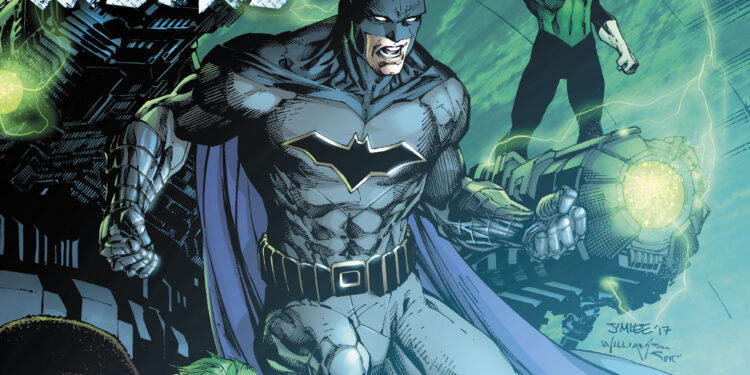 How big is too big? Can a story’s scope go beyond ambitious, yet not lose sight of its singular focus? This is the type of question I kept asking myself repeatedly as I read the second prelude to the DC Comics crisis event METAL. The first prelude, The Forge, set the scene in a neat and quite urgent narrative – Batman has a ton of secrets and everyone around him is trying to figure it out. We review Dark Days: The Casting #1.

Here we are with another time-hopping story running concurrently with a present-day mission spearheaded by Batman. As a reader, you are constantly unsettled by what his direct aim is. You see him meandering through impossible landscapes and interacting with magical creatures and beings, but the smart writing by Scott Snyder and James Tynion IV places you in the shoes of his fellow League cohorts. A place of absolute uncertainty.

Also leading om from The Forge, we find Hal Jordan’s Green Lantern and latest Bat protégée Duke Thomas’ horrific find of a trapped and caged Joker in the Batcave. The Joker plays a huge role in this, the prey acting as a hunter, toying with Hal and Duke and eventually breaking free from his confines. The most interesting part of the story comes from his overtly confident revelation that Duke isn’t just another Robin or Batgirl or Nightwing joining Bruce’s army, but that he is something different. He refers to Duke as ‘The Signal’, a beacon calling something forth, something ominous and unknown. Meanwhile, Batman has returned from his mission to find sources of the much-maligned Nth Metal. He finds a piece in the hands of his former lover Talia Al Ghul and the clear connections from his previous mystical encounters with a character such as Ra’s Al Ghul plays beautifully into the narrative. She hands him a dagger made of the Nth Metal, once owned by Shazam. Again, the scope widens.

His arrival at the Batcave heralds a scene within which Duke uses a spare lantern ring from Hal to demonstrate his meta powers, the reason The Joker believes Bruce was interested in him in the first place. It is then revealed that the Metal courses through the veins of Duke and his mother, true meta human exponents. This exact same Metal also repaired the face of the Joker and brought Batman back to life. The intrigue widens.

The final panels show a looming force, readying itself for a return. It is deeply disturbing and makes you anxious to get going with METAL. Batman becomes the absolute centre of the story and you have to give credit to the storytelling itself, not being afraid to show our hero in a sometimes unflattering light.

The art in the book is stunning, albeit a tad fragmented because of the three very distinct aesthetics employed by the pencil team. I mentioned this in my previous review that it can come across as a bit jagged, but it also serves the different sequences. The writing by Snyder and Tynion take you to places of deep discomfort and that is what appeals to me. It is rich and cinematic, uncompromising of its vision and leaves you wanting more.

METAL kicks off in August 2017 and I am anticipating a complete reassessment of our favourite heroes. Nothing will be the same again.