The devil of Hell's Kitchen is back, but is he back for good? 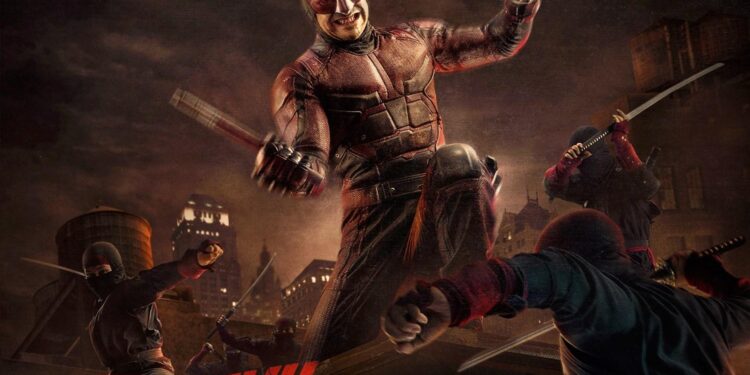 Since Daredevil cleaned up the streets of New York, brought an end to police corruption and sent Wilson Fisk – the Kingpin – to jail, his vigilante justice has become a little easier at night and his days as lawyer Matt Murdock have been successful. Or at least successful enough to keep the law firm of Nelson & Murdock stocked with rhubarb pie. Since their clients usually can’t pay them cash but don’t mind giving them food, the simple fact is that they’re broke.

When Irish mobsters get assassinated and a biker gang comes under attack, it’s obvious that a new player is on the scene. For fans (or if you saw the show’s trailers) it’s obvious who’s responsible: Frank Castle, the Punisher. Before long, he and Daredevil are trading blows and arguing ideologies all over town. It’s almost a shame that after four episodes Frank is handed into the cops to make way for this season’s other new addition, Elektra. Picking up on some hints dropped last season, Matt’s old trouble-making girlfriend (and psychopathic assassin) Elektra shows up and drags him into what he believes is a battle against the Yakuza. Instead, it’s The Hand, an ancient order of ninjas whose goal is to create chaos and raise an evil empire based on a legend of immortality. Joining the fray with the good guys is Matt and Elektra’s old teacher, Stick, and it’s up to them to stop war breaking out in Hell’s Kitchen.

Given his vigilante lifestyle, Matt’s legal business has to rely on his partner Foggy Nelson to defend the Punisher in court, whilst their secretary Karen Page investigates a cover-up into how Frank Castle’s family were killed. With his friendships falling apart, his career coming second and with loyalties tested in his war against crime, can Daredevil pull through and battle an enemy he can’t even understand? After the massive impact, Daredevil‘s first season made and the impressive Jessica Jones, does Daredevil‘s second season live up to the hype?

The answer is both yes and no.

The good news is that the action is as fluid and exciting as it was last season. It’s also learned from all the first season’s weaknesses in creating tighter episodes, and gives background characters more time to shine. The performances are mostly excellent, and there’s a lot to recommend it. The bad news is that, just as it’s learned from the first season’s mistakes and fixed them, it’s strangely failed to copy that season’s strengths.

The story feels a little weaker and more unfocused, primarily due to the lack of an actual villain this time around. With no Kingpin (although he does feature in a couple of episodes to great effect) it’s a little hard to understand just who our heroes are fighting and why. The Hand are masked ninjas with no personality, and after dozens of them have been defeated you can’t help but become bored of them. The same can be said for the loss of Ben Urich, one of the pivotal characters of season 1. Karen’s investigations with Urich’s old editor (does anybody even remember his name?) seem less dramatic because of this. Plus, there’s a distinct lack of likability with Matt this time around. His stubborn attitude and coldness in some situations make Daredevil ironically the least interesting character in Daredevil.

Those negatives aside, there are still many positives. Foggy Nelson proves that he’s more than just comic relief, both in the courtroom and in several tense action scenes. Those scenes with Kingpin are arguably even better than those in season 1. The show doesn’t play down to the audience, and it sets up some important future plotlines in subtle ways whilst resolving others. And then there’s the Punisher…

Jon Bernthal’s portrayal as the Punisher is something truly astounding. Anybody who knows the character from the comic books understands that he’s more than just a grim one-dimensional anti-hero. He isn’t just a mindless killing machine, he’s a complex and tragic figure. And a killing machine, yes, but not a mindless one. Here Frank’s lethal precision, intensity and inner torment are all on display. Bernthal’s Frank Castle is genuine, a raw primal force who appears to have stepped straight out of the comics. Given that fact, it’s hardly surprising that one episode is an adaptation of arguably his most notorious rooftop confrontation with Daredevil.

With all of that on offer, there’s enough to keep fans happy even if Elektra’s tale seems weaker than the Punisher’s. But since both are played out over all 13 episodes together, it’s another exercise inpatient but well-told storytelling and well worth viewing.