Danbo: The Origins Of The Popular Cardboard Robot 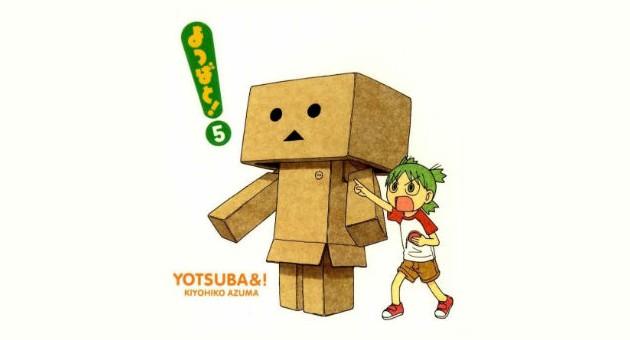 On the internet, Danbo (not to be confused with the Danish cheese) is much more than just corrugated cardboard, but rather a lovable Japanese cardboard robot for which many a site are dedicated to. But where did it all start, and how did it become such a popular internet icon? Danbo (also known as Danboard, Danboru, Danbooru, and Cardbo) first appeared in the manga comic series Yotsuba&! by Kiyohiko Azuma, in Vol. 5 Chapter 28, April 2006 and wasn’t intended to be a recurring character at the time. Yotsuba’s next-door neighbour, a girl named Miura Hayasaka, designs and gears up in the cardboard costume as part of a school science project. When Yotsuba sees the costume for the first time, she is truly convinced that it is real and asks the robot its name. Miura, not wishing to ruin the enthusiasm of her friend, responds with the name Danbo, a play on the Japanese word for corrugated cardboard, danboru. Muira further stated that Danbo was a real-life attack robot, which was powered by adding money to the slot on the chest. Yotsuba believes that the robot is real and Ena, Miura’s friend, refuses to let her crush Yotsuba’s dreams by telling her the truth.

You can read the chapter of Yotsuba&! online here. (Be sure to remember to read from right to left, the Japanese norm)

Note: The original English translation used the name Cardbo, which was later republished by Yen Press to use Danbo instead, as the editor at the time said it was “cuter”. At the time, Danbo was relatively unknown, recognisable only to those who had been following the comics. As with many other Japanese manga, characters are often reproduced as toys and models. In late 2007, Japanese toy manufacturer Kaiyodo released their first Danbo figures as part of the Revoltech line of products to feature movable limbs, some of which included interchangeable Muira/Danbo heads. In later years, the figures were manufactured in many several variants (and sizes) using different ‘boxes’, including the popular amazon.co.jp, Pepsi, and 7-Eleven. In 2009, Flickr users began uploading photos taken with their Danbo figures, which would be placed in everyday situations to resemble a humanoid Danbo. The most famous of such photo-shoots came in March 2009 when Arielle Nadel commenced her Flickr series 365 Days of Danbo, which was later compiled into a book titled 365 Days of Danboard. Many more groups were founded with the Danbo tag, with many other sites from around the world comprising of a few Danbo groups themselves. In just three short years, the Danbo Love Flickr group established in 2009 amassed over 3300 members, with a total of 23,000 photo uploads. Danbo has also received much love on Facebook and Twitter in recent years. Danbo is the alleged, unofficial mascot for Japanese Amazon, after it was recommissioned by the site. The figure still remains a popular subject for many photographers, and still achieves strong sales internationally via Amazon and eBay. Its simplicity, easy to create poses and innocent/sad looking facial expression is what made Danbo such a popular subject for photos across the internet.