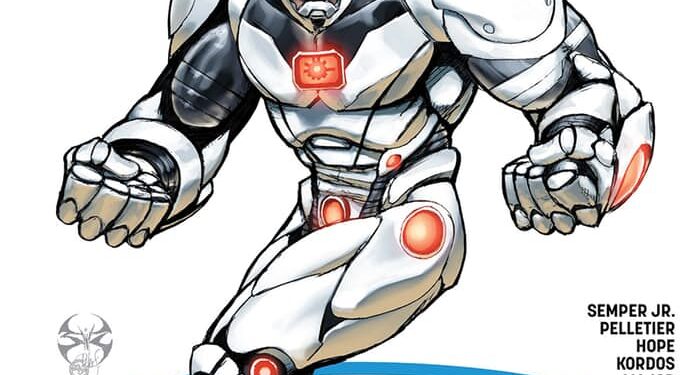 Victor Stone – Cyborg – has come a long way over the years. From being one of the most beloved members of the Teen Titans to being a rather forced, ill-fitting member of the Justice League, he’s made his mark. Now he’s powered up and ready for action again, so it’s his turn for a Rebirth. [dropcap]W[/dropcap]hen S.T.A.R. Labs comes under attack from a cybernetic creature called Malware, Cyborg leaps into the fray to protect the world-famous scientific research facility and his father who works there. Yet during the fight, Cyborg is being watched by an unknown observer and information about him is being gathered. And through this, we learn the origin story of this incarnation of Cyborg: an over-achieving child whose mother was dying of cancer and whose father was too busy to pay him any attention.

Years later Victor Stone was caught in a lab accident which forced his father to perform experimental cybernetic grafting to save his life. But what does this have to do with Malware, his attack on S.T.A.R. Labs… and a mysterious hidden room, which is Malware’s true goal? Any Cyborg origin issue is always going to draw comparisons from long-time fans with the classic Marv Wolfman/George Perez original, and understandably it’s going to fall short. The updated origin simply isn’t as powerful no matter which way they tell it. However, for new readers, it should explain the history of the character enough, and it does a solid enough job in laying the groundwork for the main story. Unfortunately, the main story isn’t all that intriguing and Malware is just another bland and expendable pawn for a bigger villain.

That being said, there are some decent moments towards the end where Vic experiences the age-old dilemma regarding the nature of the soul in the machine. It isn’t the first time he’s questioned if he’s more machine than man and what that means, but it always works and that’s what counts. The flashback origin sequences work best in regards to the art, although the Cyborg sequences – whilst being interesting and well-defined – do sometimes look a little too busy, with too much going on in certain panels. However, that’s nit-picking because this is a good-looking book regardless.

If you aren’t a fan of Cyborg already then this probably won’t change your mind. Whether it’s going to be a series worth following, only time will tell. Yet it’s still one of the better books in the Rebirth list, even if it doesn’t stand out.