If Richard Branson is right and failure is the best teacher, Cuphead is 7 years in Harvard. I have never, ever, ever played a game like this in my life. I had heard it was difficult but I was not expecting this. At first glance, I thought this would be a great game to play with my kids as there is a co-op mode where you can play both Cuphead and Mugman. It looks like the cartoons of the ’30s and ’40s, like Betty Boop and Disney’s Steamboat Willy, and a stomping jazz soundtrack from the same era. Perfect gaming for my ‘tweens, I thought, with a PEGI rating of 10.

To be honest, it is a great game for kids, just not when they play with me because I have not shouted and sworn at a game as much as I did with Cuphead. My wife first said I was not allowed to play with the kids anymore. Then she said I wasn’t allowed to play until they were asleep and the games room doors were closed. Eventually, I had to wait for her to take them out for the afternoon and that is why the game is called Cuphead: Don’t Deal With The Devil!

It’s beauty and attention to detail, the way it gives you the surreal, almost psychedelic, characters and scenarios, the bosses with their bizarre powers, all of it, is the digital equivalent of that little worm-like piece at the end of the Angler Fish’s antennae, designed to lure you in with the promise of a quick and easy way to satisfy your hunger for a fun 2D platformer that’s a visual treat but ultimately not that demanding.

And like the stupid, fat, unsuspecting fish, you take your first bite, and before you know it, the Angler Fish, all teeth and spikes, and nightmares, has you, its eyes glowing like the embers of hell… and you are screwed. Cuphead and his mate, Mugman, can’t settle a debt they have with the devil so they have to spend eternity in hell or they can work for the devil and go collect outstanding debts from others who owe him.

Each person they need to collect from is a boss and that’s what this game is, a frenetic sequence of boss battles broken up by some left to right platformer action, ala Mario Brothers, and top-down map progression a little Zelda-esque.

There is no checkpoint system, you start a battle and you defeat a boss with at least 1 hit point left (you only get 3, with the possibility of unlocking a 4th), or you die and start all over again. There is a saying in my house that the length of a minute depends on which side of the bathroom door you are on and never has this been truer than in this game. The average time of a boss battle is around two minutes, at least that’s what the clock says, but there is no way I can get this sweaty and hoarse in only two minutes.

There really isn’t much more to this game. There is a degree of weapons unlocking and you get to choose ammo types as some ammo works better on certain bosses than others, but it’s really rudimentary, but it is completely addictive. There is so much going on in every level and every scenario produces another WTF! moment, like a boxing glove-wearing frog that eats another to turn itself into an evil slot machine, or a giant bird wearing cuckoo clock armour and its tiny, ray gun-wielding chick that fires wads of garbage at you by literally turning its head into a bin, at some point you have to stop a wonder about the people who made this game. Are they creative geniuses? Or should we be worried that they are out there, unsupervised, creating what I suspect is a subliminal programming tool for George Soros and the Illuminati. In previous games of this nature, you could learn the attack patterns of the bosses you face. I played Surge again recently and you can recognise when an opponent is getting ready for a specific move and you can counter or dodge appropriately. Not here. The barrage of attacks comes relentlessly and there is no pattern I could discern. You are always on that knife edge of control and disaster and I often would feel like I cleared a stage more out of luck than any type of skill.

This randomisation is probably the only real gripe I have with the game as it can work in your favour as quickly as against you. Not often, but on more than one occasion, I defeated a boss in what felt like only an hour of frantic button pushing (but was probably less than a minute) just because the randomisation of his attacks were working in my favour. Speaking of buttons, the default button layout on the Xbox One is not conducive to success. The Y button is jump and the X is fire and seeing as you are doing both continuously, you may find your fingers getting in each other’s way like your girlfriend’s little brother. Fortunately, you can reassign buttons, which literally was a game changer.

There are also 2 difficulty settings, easy and normal, which should have been called difficult and impossible. You can switch between each, but you cannot progress unless you complete a stage in normal.

This is something completely different and I love it! The randomisation of attack patterns makes for huge replay potential, though, if I’m honest, replaying a stage for any reason other than necessity just seems masochistic. I truly believe that this game has burned new pathways in the part of my brain responsible for self-preservation. Just thinking about going back to any boss challenge fills me with anxiety. I have joked about it in this review, but I think this may be an extension of the MK Ultra program and my fear is that I have been prepared for the day when they trigger us and the world becomes Resident Evil for real.

So can I recommend it?

Absolutely! And at the price, I’d say do it now, Cuphead is something fresh and clever and I hope we will see more of this kind of thing in the future. 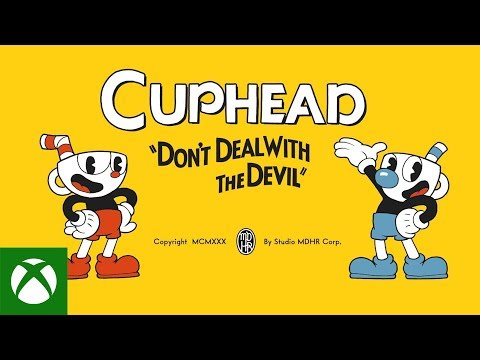