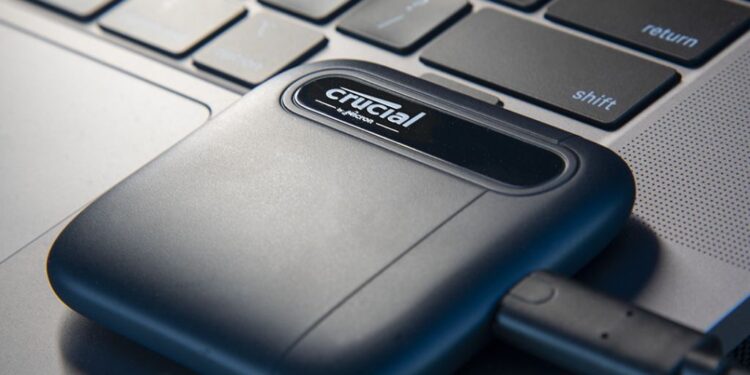 “Your digital life stored at your fingertips.” That’s the slogan for the Crucial X6 Portable SSD, a storage device that can hold up to 4TB in its tiny, compact casing.

There’s a stunning number of portable storage options available today. Whether you’re looking for something with high capacity or something more portable, there are options to suit your needs. In addition, there’s a crazy mix of performance options, with various price points as well. As such, there’s no one-size-fits-all storage medium for everyone. Crucial has introduced its new X range to South Africa.

In the form of the Crucial X6 Portable SSD, it aims to bring an ultraportable device to the market.

When receiving the package from the courier, there was nothing overwhelming about it. That soon changed once the actual box of the Crucial X6 was revealed within. It’s small. Very small. And, once the box was opened and the SDD unpacked, it was even smaller than I had even assumed, then. I’ll go further into the dimensions in the next section of the review.

The contents are just as minimalist as its size. Opening the packaging and you’ll see the Crucial X6 on the top. Taking it out reveals the USB 3.2 Gen-2 Type-C cable. It measures around 150mm. This is quite short, which adds to its portability, but does make it trickier to use on desktop PCs, TVs and even consoles.

Further to this, there is a tiny user manual as well. This covers your standard instructions, warranty, links and more, across the various languages. 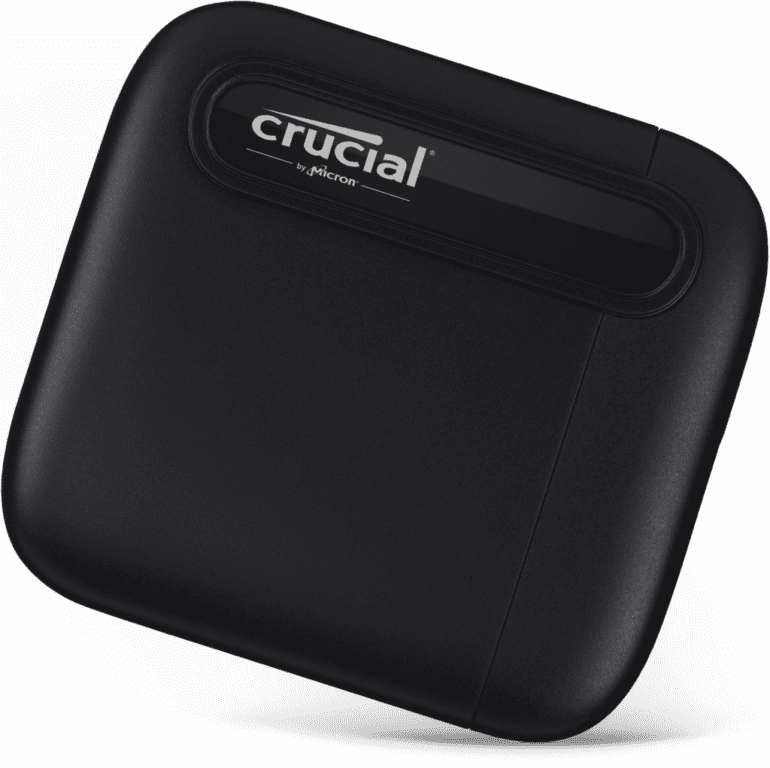 As stated in the unboxing, the Crucial X6 is tiny. It measures just 68.83x64x10.92mm. To put that into perspective, it’s smaller than the palm of my hand. It’s also super light, weighing just 42g. To understand that in everyday terms, it weighs less than two AA batteries, and, according to a Google search, that’s about the same as a slice of white bread.

Both its size and weight make it extremely portable. It’s hard to get over how tiny it is — especially since it is carrying 1TB of storage capacity. It’s just above 1cm in thickness, making it easy to fit into your pockets. I’m pretty sure if can fit into a few wallets as well.

Further to the above, the design is fairly straightforward. It’s almost a flat square, with just about 4mm from it being symmetrical. The edges of the unit are rounded, both surface and sides.

It’s a predominantly plastic build with a matte black finish. On the top side of the front and the rear surface is the Crucial logo with the rear having some additional information printed, such as the serials and the likes. 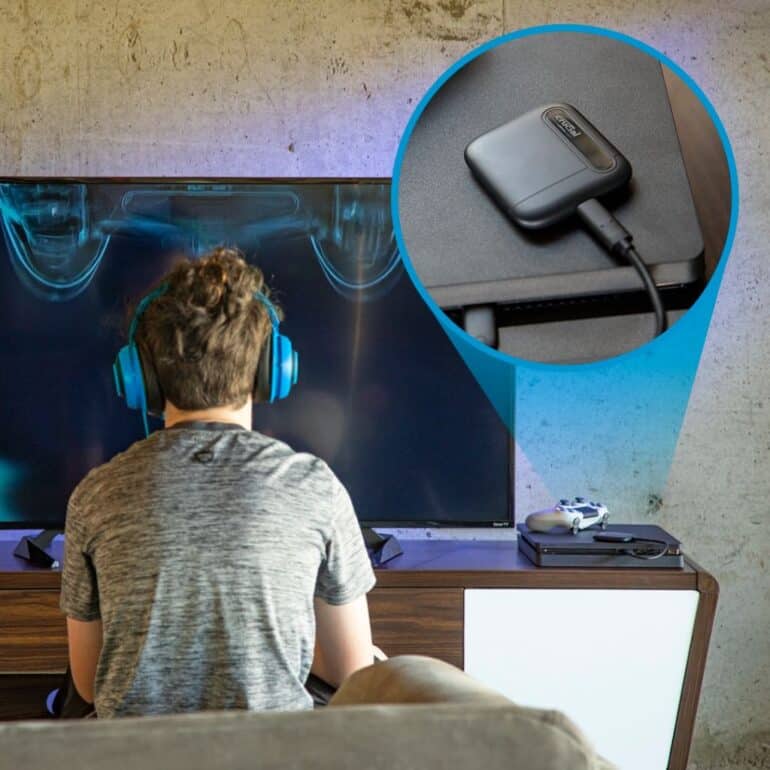 When it comes to performances, the Crucial X6 offers a decent amount of it. On paper, Crucial specifies that it has read speeds up to 540MBps, using the USB 3.2 Gen-2 Type-C interface.

I’m not quite sure what environment the brand used to achieve these numbers, as the benchmarks were some way below this. Using the CrystalDiskMark tool, it achieved around 460MBps and 430MBps on average for read and write speeds, respectively.

This is the most flattering of the benchmark tools, however, with an average below 400MBps on all of the rest used to test.

In real-world numbers, the results were around the 350MBps mark with sequential copying of smaller files of about 10GB worth. For a single 10GB file, the transfer speed dropped somewhat, with an average of around 300MBps taking some 30+ seconds to complete. 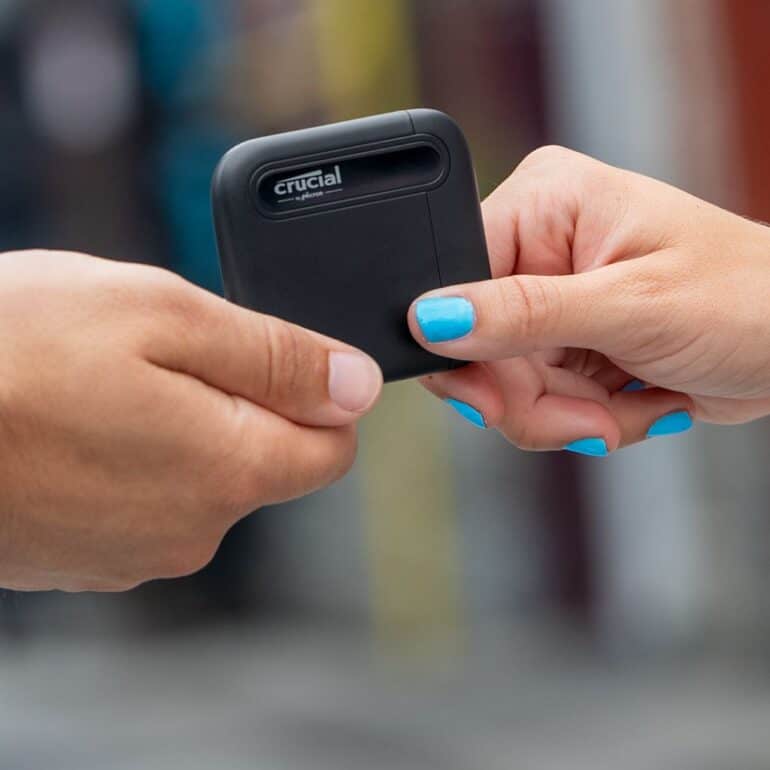 The reason for this is that the Crucial X6 drive uses QLC NAND flash. This is a DRAM-less SATA 6Gbps SSD controller. What that means is that Crucial has sacrificed performance to accommodate a much smaller frame than most other drives. This is especially true for sustained writing, with the limitation of its cache slows down the performance.

What’s interesting is that upon searching the web, I found that larger capacity variants of the same drive yields much better write speeds. The 2TB version has a 20-30% read/write increase and the 4TB nearly 60% over the 2TB. On paper, this means that, between the 1TB and 4TB, there is almost twice the speeds on the latter, which is much more impressive overall. 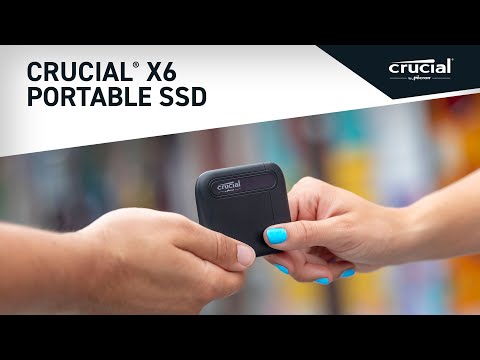 Should you purchase the Crucial X6 Portable SSD?

When it comes to the ultimate portable device, the Crucial X6 Portable SSD is easily one of the most portable around. Its small size and lightweight build makes it easy to travel with, even in your pockets, as it’s smaller than the palm of your hand.

There are a number of options it comes to capacity, starting at 500GB up to 4TB. With the increase in capacity, it brings an increase in performance, doubling between the 1TB and the 4TB models. The caveat here is that pricing also almost doubles, starting at R1,599 for the 500GB, R2,499 for the 1TB, R4,999 for the 2TB and R9,999 for the 4TB version.

If you’re looking for an ultraportable SSD with decent performances, the Crucial X6 is a great option. However, if you’re looking for something with a bit more in terms of read and write speeds, there are quite a few options available, although you will be looking at a more premium price range in the end.

The Crucial X6 Portable SSD is a massively compact and portable drive. It’s small enough to fit into your pocket and light enough to forget it’s there. Its performances are in the mid-range bracket, but with fairly competitive pricing.