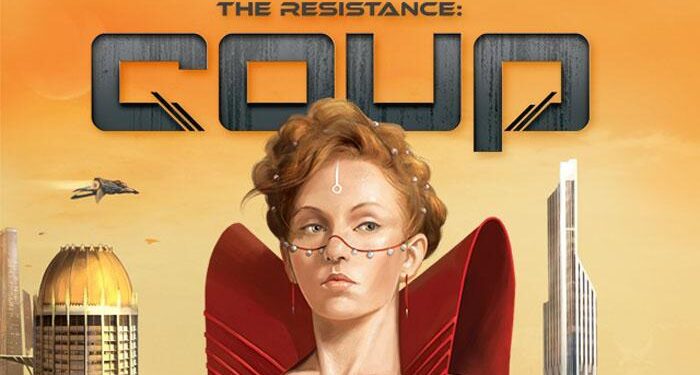 Welcome to a future driven by greed and profit, where the privileged live a life of luxury and the masses live in poverty. As part of the privileged few you have to decide who to trust, and who to dispose of in order to gain absolute power.

Micro games have become a popular genre since the launch of Love Letter. Coup is another one of these micro games that has you bluffing and deducing your way to victory. Who is lying and who should you trust?

In Coup you are part of the elite few and have to use all of your deduction and bluffing skills in order to be the last one standing.

Coup as with most micro games comes in a small little box. The box contains a deck of 15 player cards. These cards are made of a good quality card stock. The artwork on the cards are really striking and, is similar to “The Resistance” card game, seeing as both these take place in the same” universe”. There are also 50 coins in the game which are made of some really nice thick cardboard stock. The design of these coins fit in well with the theme.

I also appreciate the fact that the box contains 6 player aids, as this makes remembering each character’s ability a lot easier.

Every component fits nicely into the small box which, of course, makes transporting the game a breeze. The rules of Coup are really easy to learn and teach (as with most micro games).

Each player is given 2 coins to start off with and is then dealt 2 influence cards (face down). The rest of the coins and deck of cards are placed in reach of each player. The game contains 3 copies of each character in the game (a total of 15 cards). Each character has their own abilities which, players are able to use during the game.

Players are able to take one of three actions (instead of using character powers):

Players are also able to use their character’s abilities:

A player takes one of the above actions and then the next player takes their turn. The catch is that players don’t just have to take the actions of the characters the have in their hand, they can also lie. Say for instance a player has an Ambassador and Duke; they can (if they choose so) take the actions of the Captain and steal from another player. The danger in doing this is that the opponent can call your bluff which forces the player to reveal their card. If the player was lying, they have to discard one of their influence (character) cards face-up.
If the player was telling the truth, the opponent must then discard one of their influence (character) cards face-up.

When a player loses both of their influence (characters) cards they are eliminated from the game. A game of Coup ends when there is only one player left standing. Micro games that tend to be successful and sell well are those that are quick to learn and accessible to almost any type of player. Coup checks both these boxes. It is a really easy game to teach (thanks to the handy player aids), and it took only a few turns for everyone in the group to discover its intricacies.

For anyone thinking of adding Coup to their collection, it is important to note that a successful game of Coup is largely dependent on the group of people that you are playing with. A game of Coup tends to be at its best when played with players who don’t mind bluffing and negotiating.

The different powers feel unique and work very well together. The best part of Coup for me is that it encourages player interaction. We played many games in which people started off not really interacting with other players, but that soon changed as they realized just how important these interactions were. Coup is as much about bluffing as it is about reading your opponents and figuring out when they are telling the truth.

I did find that Coup tended to suffer from the same problem associated with most micro games, namely replayability. It just tends to be one of those games that you bring to the table, play a few rounds, and then put it back on the shelf to play something else.

What Coup does, it does well, as a short bluffing, negotiating and deduction game it is loads of fun. If the player interaction is your cup of tea, and you are looking for a short bluffing game to play in between more substantial games, then Coup might just be worth your while.

Game play: 8/10 The game is very easy to teach thanks to the great player aids. A game of Coup is really quick; this makes it possible to play a few rounds back to back.

Complexity vs. Depth: 2/5 Although Coup isn’t that complicated to learn, it does have some intricacies to discover.

Theme: 3/5 Being a bluffing game I wouldn’t say that the theme is the main attraction of the game, it does, however, work well in Coup.

Overall : 3.5/5 Coup is a great micro bluffing, negotiating and deduction game. When played with the right group it can make for some laugh out loud moments. If you are in the market for a micro game and enjoy player interaction then Coup might be right up your alley.