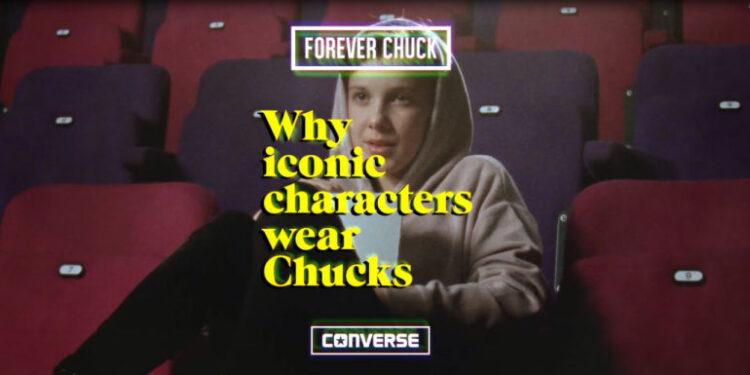 Converse has wrapped up their Forever Chuck series, which features a trio of videos including Millie Bobby Brown, Vince Staples and Winnie Harlow. The campaign focused on the daring spirit of youth, with the digital and social media series exploring three core cultural scenes (film and TV, LA culture, and style and the world of fashion).

The series of videos were directed by award-winning filmmaker, Karim Huu Do, and features three videos titled “Why Iconic Characters Wear Chucks”, “How LA Shaped Our Style” and “Chucks from the Runway to the Streets”.

The first film in the series is hosted by actress Milly Bobby Brown, which explores why the coolest characters in film wear Chucks, and what Chucks say about the characters who wear them – meeting legendary stylist Stephanie Collie to get her expert opinion. Brown was most recently nominated for a People’s Choice Award and Screen Actors Guild Award on behalf of her performance in the critically acclaimed Netflix sensation “Stranger Things.”

“The Chuck Taylor has remained a symbol for underdogs, rebels and teen heroes – the characters we love and identify most with – in films and television,” said Julien Cahn, Chief Marketing Officer at Converse. “By pairing some of the most memorable scenes of the past with rising stars of today, we celebrate Chuck Taylor’s legacy and pay homage to its place within youth culture – both on and off screen.”

The second film is hosted by west coast rapper and style icon Vince Staples, who takes viewers on a powerful journey through the urban culture of Los Angeles and Chuck Taylor’s influence on street style and hip hop music. The video taps into the city’s diverse youth culture — from the neighbourhoods where LA’s underground hip-hop scene originated to some of the people that define the area today.

“Los Angeles has played an important role in revolutionising youth culture far beyond the west coast — from the style to the music scenes” said Julien Cahn, Chief Marketing Officer at Converse. “And Chuck Taylor was a part of that cultural movement, as a symbol for underdogs, rebels and individualists in Los Angeles and all around the world.”

The final installment of the Converse Forever Chuck series dives deep into Chucks, from the runway to the streets. Paying homage to two of the biggest fashion hubs in the world, London and Paris, the video dives deep into Chuck Taylor’s iconic influence on global fashion. Hosted by international model Winnie Harlow, the video explores the latest trends in high-low styling that pairs corner thrift shop finds with haute couture. Speaking with ground-breaking leaders within the street style scene, Harlow brings viewers into the forefront of trend-driving fashion movements in London and Paris. The video will also feature cameos from some moguls in the fashion industry who have come to embrace Chuck Taylor as part of their style, including Gucci Gang, Jeremy Egry of Etudes Studio, Sarah Andelman (founder of street style mecca Colette) and Emma Hope Allwood of Dazed.

“Fashion is one of the most influential cultural movements and purest forms of individuality and self-expression,” said Julien Cahn, Chief Marketing Officer at Converse. “The versatility of the Chuck Taylor allows the sneaker to be on point with a high-end couture dress or jeans and has remained an iconic symbol of fashion expression worldwide.”

All of the films within the Forever Chuck series highlight the confident and daring spirit of youth, a spirit that has defined Chuck Taylor loyalists in the past, present and future.