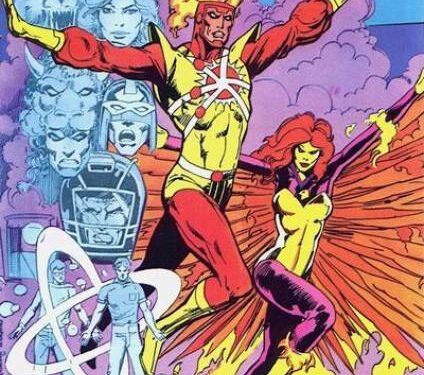 Superhero origin stories are the best of tales and the worst of tales for comic book readers. Every character’s story has to begin somewhere, and usually in comics it’s issue #1.

One of the biggest problems though is that that means the first issue spends several pages – or even the entire issue – getting down to the really good stuff, which is seeing our hero in costume, doing whatever it is they do. It seems like such a waste, yet without the origin story we wouldn’t know anything about our hero or why they became that in the first place. That might not apply to all of them, of course. Wolverine functioned well enough for years with no origin at all, but if you want depth in your characters then that means you have to sit through their origin story. The downside of that is also being subjected to hearing their origin story over and over again. Batman is the biggest offender, and it seems like his origin has been told ad nauseam over and over, in comics, on television and in the movies. Occasionally though a fan may find that rare item: a re-told origin story which manages to be original in some other way. And this comic book from the vault is one of the best you’ll ever read.

Origins – issue 22 of The Fury of Firestorm, The Nuclear Man… or simply Firestorm to the fans – is one of those seemingly endless re-tellings of origin stories out there. So what makes it different, and sets it aside from what would normally just be a “filler” issue? Good storytelling and style.

After some debating in prior issues over whether he should reveal his secret identity to his potential love interest Firehawk, Firestorm decides to go for broke and tell her who he really is. Of course, since it’s a little complicated, he has to explain his origin story to her as well. If you’ve read Firestorm before, watched the Brave & The Bold cartoon or have seen TV’s The Flash, then you’ll have some idea of what that entails.

Ronnie Raymond was a teenage jock in a new school, struggling to make friends and (in a nice twist) being bullied by the class nerd. Across town, Nobel Prize-winning physicist Professor Martin Stein has managed to create the world’s first completely safe nuclear power plant. However, he’s facing protests from the public and is being sued by an underhanded rival scientist. When Ronnie tries to impress his classmates by joining a protest group, he’s shocked to learn that they’re really terrorists intent on blowing up the power plant. Ronnie, betrayed, is knocked unconscious in the heart of the nuclear plant to serve as a scapegoat for the terrorists. Stein is knocked out too, although Ronnie regains consciousness. When the bomb explodes, it triggers a reaction which should kill them both; instead it merges them into the being known as Firestorm. Capable of absorbing radiation, firing blasts of energy, becoming intangible and – coolest of all – being able to alter the atomic structure of anything, his first task is to stop the terrorists from attacking another nuclear plant.

However, there’s a side-effect to his abilities. Firestorm is both Ronnie and Professor Stein. His appearance is a combination of the two, and while Ronnie has the dominant persona he also has Stein in his head, lecturing him and advising him on how best to use his powers. The personal dynamic between the jock trying to be accepted for his intelligence, and the professor who has become almost a timid recluse, is simultaneously hilarious and poignant as they struggle to accept each other.

As this story ends, the real question facing Firehawk is whether she still wants to pursue a romance with Firestorm. Is he a teenager, years younger than her, or an older man? Does she only have feelings for the combination of the two of them, or is she willing to pursue a relationship with one over the other? And are the feelings mutual for both Ronnie Raymond and Professor Stein? Plus, Ronnie has feelings for someone else, just to complicate matters further.

Over the years we’ve seen so many origin stories re-told that we know them instinctively. The destruction of Krypton. The parents gunned down in an alleyway. The boy being bitten by a radioactive spider. The man being hit by gamma rays. Firestorm is one of the more minor characters in the DCU, and maybe it’s this lack of familiarity which makes this re-telling of his origin story work, along with the framing device of the tale which adds weight to this.

With his split personalities and shared body, Firestorm is one of the most complex characters DC has… but has been somewhat wasted over the years. However, writers Gerry and Carla Conway and artist Pat Broderick manage to create a fast-paced story which is book-ended by one of the most intriguing personal relationships in comics, laying the groundwork for an original and offbeat love triangle.

Despite his powers, Firestorm has never been one of DC’s hottest properties but thanks to TV shows there’s been a bit more interest in him lately.