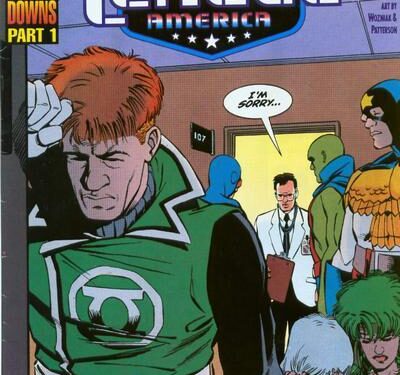 They say that every good story has a beginning, a middle and an end.

When it comes to comic books though, that isn’t quite true. There are times when the creative team behind a book leaves, but they’re replaced by other writers and artists. Some comics get cancelled, usually with a headline on the cover that reads FINAL CLIMACTIC ISSUE! Sometimes the character and comic book are never heard from again, although often they return years later thanks to a reboot. Even a mini-series may end, but you’ll probably see those characters again at some point.

Comic books are like soap operas. Stories overlap, but every “ending” is a beginning too, a new adventure. That’s why fans think about eras as well as the whole, which is why some creative teams are more closely associated with titles than others. Frank Miller may not have created Daredevil, but many fans will say his era was the best. The same goes for Chris Claremont and John Byrne on the X-Men, Alan Moore on Swamp Thing, Peter David on the Hulk and so on. For a series which focused more on comedy and character development than action, fans knew that when it got serious it always packed a huge emotional punch. One of the biggest began this final giant storyline: Maxwell Lord, founder and UN representative of the JLI, is shot by an assassin and lies in critical condition. With the team members reeling from shock, things begin to splinter quickly. Worse, the UN take charge and decide to implement sweeping changes.

Several members are fired, others are put on probation, and the trail of the assassin leads them down several dead ends. Before long the JLI are evicted from their headquarters. Even when the mystery of the assassin is resolved, their job isn’t done. Their old enemy Despero returns, being chased by intergalactic bounty hunter Lobo. Could Maxwell Lord’s recovery be just what they need to set things right? No. If anything, it becomes a nightmare.

Max Lord becomes possessed by the villain known as Dreamslayer. Using his telepathic abilities to control the native inhabitants of peaceful island KooeyKooeyKooey, and then many members of the League itself, his defeat can only come through one hero’s self-sacrifice. Even as the story arc draws to a close, they’re delivered more humiliation by being beaten by a low-level threat and their lives are saved by a simple duck-hunter.

Taking stock of their lives, their future is in doubt. Maxwell Lord is bankrupt. The UN will no longer endorse them. Their embassy lies in ruins. Several members quit, the pressure on them being too much to take. Their personal relationships are in tatters, all hope is gone, and they question the nature of why they’re heroes at all. Yet despite all of this, there’s always hope…

In recent years the JLI era has been considered too farcical to be taken seriously. Yet for years it was DC’s top-selling title, and was considered the perfect antidote for the dark X-Men titles of the time. This final story arc upped the stakes for them constantly, delivering both laughter and tragedy as it disassembled the highlights of their tenure piece by piece. The art in it is sadly not at its best (although the final chapter fittingly featured Kevin Maguire’s return). However, the storytelling plotted out by Keith Giffen is masterful and worth far more than just a cheap laugh. It was the end to a series which brought obscure characters to the fore (Blue Beetle, Booster Gold, Green Lantern Guy Gardner) and proved to everyone that a Justice League series without the most famous DC characters could be every bit as good… or even better.

Sure enough, a month later there was a new creative team in place and the dynamic of the Justice League had changed with them. It was never quite the same again, the old magic had gone. In comic books it seems that the story never ends, although this was definitely an ending. That being said, it was an incredible way to bow out.