SHIELD, Flash & Ash – Doing What The Others Do Best 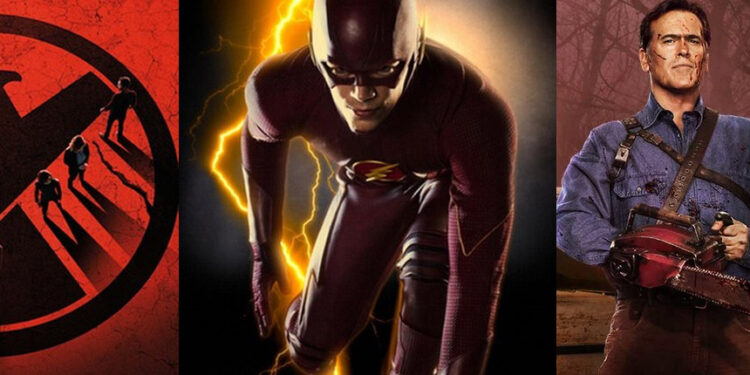 This past week saw three hit shows – Agents of SHIELD, The Flash and Ash vs. Evil Dead – all taking pages from each others’ playbooks. Whether intentional or not, it’s interesting to see what each show did with familiar routines, and it’s fair to say that each one took things to the next level. [dropcap]T[/dropcap]o start with, there was one of the best (mostly) stand-alone episodes of Agents of SHIELD ever. This was partly to do with the simplicity of the episode, as a series of EMPs apparently triggered by an Inhuman terrorist group force every country in the world onto the back-foot. While an injured Quake and an untransformed Ghost Rider have to handle basic street-level looters and thugs, Coulson, Fitz, Yo-Yo and Mac have to go back to basic science to defuse the EMP generators. With Agent May’s life hanging in the balance too, it was a brilliant yet basic episode which proved that simplicity is best.

The most interesting thing though was seeing their resident speedster Yo-Yo in action. Seeing her disarming a room full of terrorists was incredible. We’ve seen speedsters before, from two different Quicksilvers to the Flash, and each one has been presented in a different fashion. Here we got an interesting blend of all three, although the most amusing touch was seeing the result of Yo-Yo’s high-speed scouting missions into a darkened room whilst holding a glow-stick… she left streaks of blue light in her wake, almost identical to the red and gold lightning ones of the Flash.

But Agents of SHIELD shouldn’t feel so cocky. Ash vs. Evil Dead’s second season is practically a juggernaut in how it’s smashing through nay-sayers, racking up great laughs and sickeningly brilliant amounts of gore that make Monty Python‘s Black Knight look like he really did only have a scratch. Offering up one bad-taste moment of horror-comedy after another, last week’s episode – where Ash got his head inserted up a corpse’s Ash-hole – looked like child’s play compared to the latest where…

Well, where Ash holds a party and offers up pink vodka drinks full of ketamine to everyone in town, before his own dad gets frisky whilst riding a mechanical bull. Then again, nobody ever accused Evil Dead of being subtle. Yet the star of this latest episode was The Classic. Fans of both Evil Dead and director Sam Raimi know the legend of The Classic, his much-beloved 1973 Oldsmobile Delta 88, which actor Bruce Campbell has repeatedly said is a piece of junk. But it’s Raimi’s good luck charm, and has appeared in just about everything he’s ever made (yes, it’s Uncle Ben’s car in the Spider-Man movies). In this episode, The Classic became possessed by “The Force” and the results made AoS’s Ghost Rider muscle car look puny by comparison. Actually, it made Stephen King’s Christine look like a pacifist, as it went on a fiery rampage killing dopey kids with gleeful malice. While it’s doubtful that it was in any way inspired by the latest Ghost Rider incarnation, it’s a good reminder of just what that muscle car should be looking like. So far, we’ve only seen minimal flames of hellfire from that vehicle, yet here The Classic truly looked like something the Spirit of Vengeance would have approved of.

So what about The Flash? Where does this continuously underwhelming melodrama fit in? What could it do to make it comparable to these other shows? The answer, and I can’t believe I’m about to say this, is this:

It improved. A lot.

Agents of SHIELD has been a show that has continually upped its game. It’s pulled the triggers on important storylines at all the right times, jettisoned its weaker aspects and plot points as it’s progressed, and covers the ground on the big story arcs with increasing agility and stamina. By contrast, The Flash has had feet of lead in failing to make progress. Speedster villain after speedster villain has been paraded past the viewers, each one’s identity being a “big” mystery, whilst Barry Allen has looked like the dumbest man alive by repeatedly failing to learn anything from his mistakes.

This routine culminated in the pointless episode Flashpoint. Except it seems that with the episode Paradox that both the writing team and Barry got a huge spanking. And it’s about damn time. So Barry has created yet another alternate timeline. Despite some clunky writing in the first half of the episode, a visit from Jay (including a little in-joke of Dawson’s Creek) was the moment many fans have been waiting for. Not because they teamed up, but rather because Jay gave Barry a lecture and advised him to quit pissing about with creating new timelines. Likewise, Barry was confronted with being a selfish jerk whose dumb decisions have ruined other people’s lives. For viewers who have become sick of this overused plot device, it was like a bolt from the blue.

And so suddenly it appears that this show can finally move forward in telling some proper stories. The writers can progress. The show can hopefully evolve and become something better. It’s something SHIELD learned several seasons ago, and it’s good to see The Flash finally figuring it out and hopefully it continues.

Yes, there are still problems and once again we see no reason for Barry even needing a costume, since running at superspeed in his regular clothes seems to have no effect on them. However, given the hilariously sly in-joke regarding Harry Potter actor Tom Felton and Doctor Alchemy’s weapon, there’s also a new sense of playfulness going on here which is what The Flash should have always had. As Ash vs. Evil Dead fans would be quick to point out, there should be some fun mixed in with the seriousness if it wants to be more appealing. In a week where three shows all seemed to use some aspect of each others’ standard routine, it’s great to see that they’ve all benefited. It’s good for the shows themselves and it’s good for the fans.

Now if only something could be done about Legends of Tomorrow. Seriously, they’re a team of superheroes but they can’t even beat up a small group of revolver-toting henchmen in a fight at the docks? Uh…