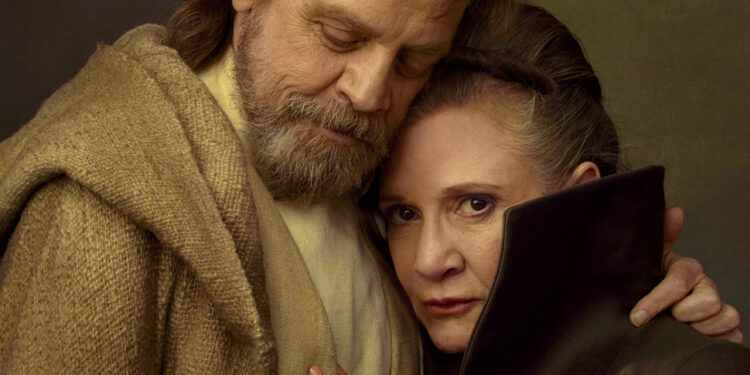 Carrie Fisher has been one of the most iconic actresses in film history. To some, she was a great actress who appeared in films throughout several different decades. However, to many others, she was something bigger. Her name, to fans of Star Wars, was Princess Leia Organa. In the most recent Star Wars fan, she became General Leia Organa. She was Luke Skywalker‘s sister and at one point love interest. Leia was one of the two offspring of Anakin Skywalker, who turned to the dark side and became Darth Vader. In a perfect world, Luke and Leia would have grown up together but that never happened when their mother, Padme Amidala, died in childbirth. Fisher’s influence on the Star Wars films continued throughout every storyline that was told.

Fisher died on December 27, 2016, after suffering from cardiac arrest on a flight from London to Los Angeles four days earlier on December 24. While that caused a great amount of sorrow across not only the Star Wars community but the film community too, it was tough for many to see Fisher’s drug addiction was still quite prevalent in her life as she struggled with that and mental illness. According to The Hollywood Reporter, Fisher had cocaine and opiates in her body at the time of her death. She also had methadone in her body too. Methadone is a common drug used to assist someone in detoxing from another drug addiction. It could be she was using methadone to taper off those other drug addictions she struggled with. The medical examiner noted that it’s currently unclear how much influence the drugs played in her death as she was determined to have passed because of “sleep apnea and other undetermined factors.”

Her daughter, Billie Lourd, gave a statement to People when news broke of the drugs within her mother’s system at the time of her death. “My mom battled drug addiction and mental illness her entire life,” Lourd stated. “She ultimately died of it. She was purposefully open in all of her work about the social stigmas surrounding these diseases.” It sounds as if Lourd thinks her mother could have used an opiate addiction treatment. She went into more detail about her mother’s struggles.

“She talked about the shame that torments people and their families confronted by these diseases,” Lourd stated. “I know my Mom, she’d want her death to encourage people to be open about their struggles. Seek help, fight for government funding for mental health programs. Shame and those social stigmas are the enemies of progress to solutions and ultimately a cure. Love you Momby.” Fisher might have benefited from an opiate addiction treatment because of her drug struggles. It may have been able to save her life in the end. Back in 2001, Fisher explained to Psychology Today why she abused drugs such as cocaine, acid, marijuana, pharmaceutical drugs and more. “Drugs made me feel more normal,” Fisher stated. “They contained me.” She compared her addictions to something that was a part of her daily life such as going to a job.

“You don’t even get high,” Fisher said. “It’s like a job, you punch in.” Fisher stated she had a compulsion to lie to medical professionals. “I was lying to doctors and looking through people’s drawers and medicine cabinets for drugs,” Fisher said. While she had attended a 12-step recovery program and different addiction groups, not every single one of her issues were addressed since she struggled with mental troubles too such as bipolar disorder.

Fisher’s life was cut short because her mental and substance abuse issues were never fully resolved. This was Lourd’s summation of the issues that led to her mother’s passing. However, sleep apnea and not addressing that played a major role in it as well. As Lourd says, perhaps, her mother can serve to inspire others to take care of their own addictions and health problems. With one in seven people today in the United States today facing substance abuse, Lourd’s message about her mother is all the more prevalent. More people in the country, 21 million to be precise, continue to struggle with substance addiction and those that can might wish to find an opiate addiction treatment or other forms of medical assistance for this terrible plague that continues on and on.