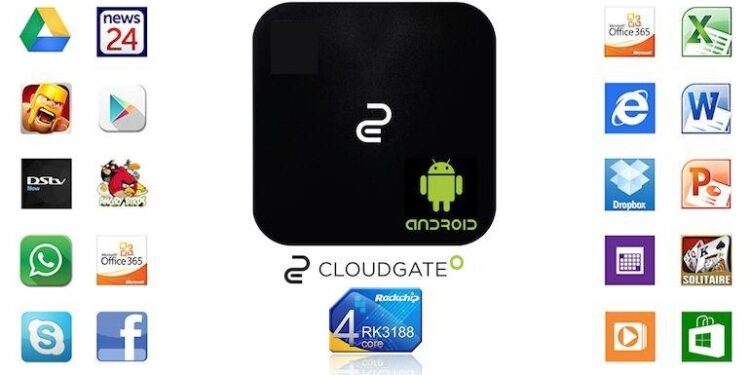 Over the past few years, there’s been a bigger push towards mini set-top boxes, which offer streaming services to your TV set by means of a paid subscription. Most of these services are developed solely for the purpose of consuming media whether it be your favourite series or movies, with a limited few offering sports streaming as well. There are, however, some offerings that offer more than just said streaming services, but operate a system on its own, most of these running on Android OS.

CloudWare’s offering, the CloudGate Android PC, or CloudGate O, forms part of the latter group, running on Android, while still offering the option of streaming services. And in addition to these two attributes, the CloudGate also falls within the category of a mini PC, offering a few elements from the traditional desktop (or laptop) environment. This puts the O in a unique position as an all-round system, but the verdict is out on whether it successfully ticks all those boxes. The O is certainly very compact. The unit measures 20x128x128mm (HxWxD) and weighs just 225g. To put that into perspective, it weighs less than two Samsung Galaxy S6 units, although, having a lot more options available in terms of connectivity (discussed below). The unit is described as being an Android PC, but, in truth, does not resemble much of the desktop PC at all. It does, however, fit the mould of the Apple Mac Mini, without the premium that is. Whereas the Mac Mini is essentially a miniaturised PC running Intel Core chips, the O runs on a more mobile setup with its ARM SoC.

The unit looks inconspicuous, and can easily be hidden away between many of your other devices in your living. If you so wish, it can be stored away quite easily when not in use, and can be transported just as easily. It wouldn’t fit most pockets, although I do own a few jackets where the unit can fit quite snug. There’s nothing special about the matte-black, squared box, but it’s not the worst piece of equipment you my own. I rather like the minimalist approach in the design, with only the CG logo in white on the top, the power LED in the front, and ports on the back to obtrude with the black finish.

In terms of its connectivity, the O offers a variety of options not available on a standard smartphone. These include a full HDMI port, x3 USB2.0 ports, x1 microUSB port, x1 SD card slot, x1 RJ45 port, x1 DC power socket and x1 SPDIF port for audio. The unit also offers internet connectivity in the form of an Ethernet port, this over and above the standard wireless connectivity options of Wi-Fi 802.11b/g/n 10/100 Mbps and Bluetooth.

The O runs on an ARM SoC, sporting a Quad-core 1.6GHz CPU, which includes a Quad-core Mali 400 (2D/3D/OpenGLES2.0 (AMD Z430)/Open VG1.1) GPU. This isn’t the greatest spec for performance available when it comes to miniature PCs, but running on Android, it has more than enough firepower to get the job done. The unit also has 2GB, 8GB internal storage, and SD card support up to 32GB. There are two things to point out here. The internal storage is very mediocre, even by smartphone standards, and doesn’t fit the bill for a desktop PC to say the least. But the intension here was to offer an affordable, portable device without the bulk of a large HDD. The unit, in fact, is aimed at cloud-based users, hence the naming convention, which makes it easier to use in a portable space. Secondly, with the inclusion of the USB2.0 ports, users are able to attach a portable HDD for use if they want. I tested this on all my devices, and they all managed to work without any issues, even my 4TB “portable”. While the USB2.0 offering isn’t ideal for power users, it gets the job done, even allowing me to play all my stored video content via the default media players.

Gamers are able to choose from their favourite Play Store games, as the GPU is able to handle it without too much concern. With the inclusion of the RKGameControlSetting app, users can plug in their controllers, assign keys, and game with ease. I’ll touch more on peripheral device support in the Software section below. Software-wise, the system runs on Android 4.2 (Jelly Bean) OS, which can be upgraded to 4.4.2. Since the advent of Android 4.0 and beyond, Google has introduced a host of features and options, which allow for smartphones, tablets and, now, PCs to run on a single operating system. What they’ve done is made it a whole lot easier to add peripheral devices to your device without the need to driver installation. And it works. Better than Windows on my desktop. Although you’re not able to setup and utilise some features on modern mouses, the plug-and-play support is immense. Not only is the OS able to detect and allow me to use the mouse within two seconds, it’s also just as efficient using dongles and receivers to connect devices wirelessly. I was surprised when all my Logitech gear worked off the bat, but astounded when I could plug in my Xbox wireless receiver and make full use of the Xbox controller as well. Truth be told, the default keys aren’t always easy to use in mobile games, which are available via the Google Play Store, the functionality is still pretty much the same as you’d expect on the console. There are a number of apps available on the Play Store allowing users to customise specific keys to an action, which add more value to games when using the controller. The OS also comes pre-rooted (so no void of warrantee here), which makes using certain apps a lot easier requiring to use specific system attributes not necessarily available by default.

Running the O as a streaming medium already makes it a worthwhile purchase on its own. But, there are a few shortcomings on its native CloudTV app. For starters, it isn’t the easiest to sign up for subscription based services. And while the line-up it provides upon using the trial service is great and enticing, it doesn’t quite live up to the bill once the two-day trial lapses and you’re in search of paid content. This is mostly due to the fact that we’re based in South Africa. Although I cannot attest to how much easier it would be streaming on the O in other countries, the fact that I was able to use the services on a trial basis puts into perspective the options that are available out there. With a few proxy tweaks, and the likes, it isn’t impossible to get around the restrictions, but then costing and data consumptions come into question. Data isn’t overly concerning given the uncapped packages available, and the connectivity options accessible to the O make it easy to connect. Taking one UK-based package, for example, translates to roughly R500pm when converted based on the poor Rand, which then only gets you one or two sports channels, and about R1000 or more when you choose all. And that’s if you can bypass the UK-only limitation.

Remember that this is supposed to be an Android PC. And while the above is a nice to have, there are a lot more uses for the O and just streaming. With the numerous amounts of Android apps available these days, performing certain daily tasks are a breeze. There are document and spreadsheet editors in their hundreds to choose from, many of which are even free to use. Where Android lacks when it comes to a direct comparison to Windows apps, is that it doesn’t quite offer the same level of function-specific tools such as programming IDEs, or the power of graphic editors. There are enough apps out there to get many a job done, but not many for the professionals. And that’s a shame considering the processing capabilities the unit has under the hood. CloudWare’s CloudGate Android PC has a lot to offer in terms of its usefulness, not just as an Android system, but as a media player, streaming service, and desktop alternative. While it is capable of achieving the first two objectives with ease, there’s still a lot more to accomplish in the desktop environment before it can replace the modern PC. Whichever way you look at it, at a RRP of R2,000, the unit is quite affordable. There are a few online retailers offering the unit at a fairer R1,500, which makes an even more enticing offer.

If you consider that the CloudGate Android PC runs on less than 10W of power, it costs quite a lot less in terms of electricity usage for your household or office. In fact, the unit is so lightweight, it can be powered by solar panels and generators, making it an ideal option for rural areas, making it more accessible to the masses than your average desktop.

Interestingly, CloudWare also offer an alternative Windows-based CloudGate PC, running Windows 8.1. This would make for an interesting comparison, as well as offer a lot more in terms of a desktop option for those looking to replace their standard equipment with something more portable. Many have dreamed of the day where you’d be capable of using your smartphone while on the move, then plugging it into your monitor, at home or at work, and doubling the device up as your desktop PC. The day is fast approaching, and with units like that offered by CloudWare, it may be sooner rather than later.