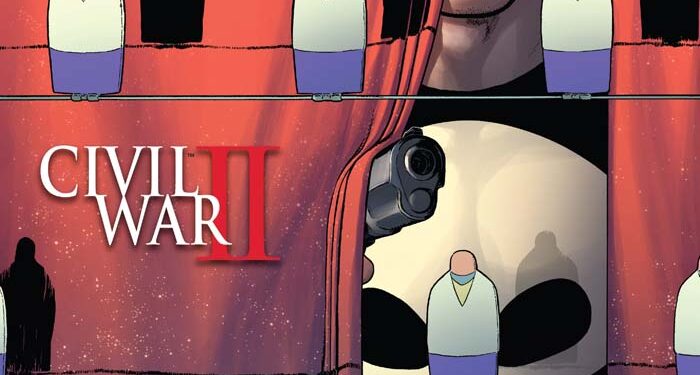 Sadly it’s a step down this month for Marvel’s Kingpin of crime… and really, it isn’t his fault. Blame the Punisher. Wilson Fisk – the Kingpin – narrowly avoids being killed in a car bomb explosion, and understandably he’s more than a little upset about it. Naturally, he suspects Janus – his new henchman who he’s been grooming to become a master criminal overlord – because Janus strongly declined to travel with him by car in the last issue. Summoning all of his criminal associates together in order to find out who betrayed him, it all seems like a normal day.

Except the Punisher shows up, and it isn’t a social call…

This series has been strong so far, allowing us to gain insight into one of Marvel’s best and most complex villains. Unfortunately, the Punisher’s appearance drags this issue down and causes the reader to lose focus on what made this title so good up to this stage. While it’s easy to assume it’s for a good reason which will be paid off in the next issue, it doesn’t help with this issue. Likewise, with Janus being understandably absent in this part of the story, it takes away from the big picture. So far readers have been treated to an amusingly touching and tragic unlikely friendship, the mentor/pupil, father/son bond between Kingpin and Janus. With half of that bond gone, the character of Fisk looks somehow less here. The Kingpin works best when he has an intriguing foil to play off of, and the Punisher really doesn’t fill that role.

Instead, this boils down to a rather unspectacular fight between Kingpin and the Punisher where you know that it’ll result in the inevitable stalemate. There’s blood spilled – and yes, the Kingpin’s life is in real jeopardy – but the fight itself is dull and seems like an unnecessary addition to the proceedings. That being said, the cliffhanger is an intriguing one.

If this storyline wraps up as seems to be indicated so far, the next issue could be incredible. However, despite any plot that this particular installment of this series may be setting up, it’s a weak addition which probably could have been handled better.