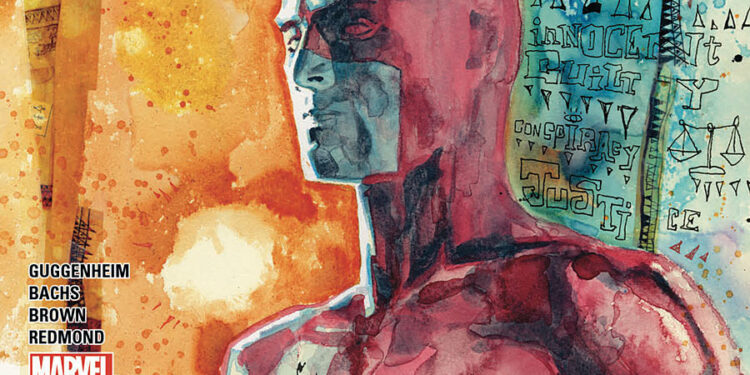 In case you were wondering just what happened during Hawkeye’s murder trial after he killed Bruce Banner, Civil War II: The Accused #1 should answer a few questions. Although in case you couldn’t tell from the cover, this is really Daredevil’s story. But then, who better to handle this nightmarish legal scenario than Daredevil’s alter-ego Matt Murdock? [dropcap]W[/dropcap]ith Clint Barton/Hawkeye under arrest and awaiting trial, Murdock is called in by the Department of Justice’s Evelyn Stanzler to help prosecute the Avenger. Hawkeye himself is understandably nervous and seeking some kind of vindication for his actions, but Murdock is willing to push for the death penalty. He begins to tear apart Hawkeye’s defence in court one fact at a time, but when a crucial piece of evidence is dismissed by the judge and Hawkeye’s lawyer complains that every objection made has been overruled, Murdock suspects a conspiracy.

As Daredevil he investigates Stanzler, uncovering shocking facts about the Department of Justice’s motivations for proving Hawkeye guilty of murder. Balancing a legal and political tightrope, Daredevil presses the judge on conducting a fair trial while as Matt Murdock he attempts to ensure that true justice prevails – whilst still prosecuting Hawkeye to the fullest extent of his abilities. But are his vigilante actions sabotaging his own case?

Civil War II has affected a lot of players and situations in the Marvel U, and for its sense of scope it has to be commended. Likewise, in terms of telling an intriguing Daredevil tale this works, and fans of both his comic books and the Netflix series should appreciate this for what it is. Daredevil does enough ass-kicking to be diverting, while still pushing Matt Murdock’s involvement as an incredibly capable lawyer. Which isn’t to say that there aren’t problems with it. But before that…

There are some great reminders of how not every character in the MU has a close bond. By Daredevil’s own admission, he never really got to know Bruce Banner or Clint Barton. Daredevil has a tight circle of acquaintances, and here that’s key. The plot is a tight legal drama, forcing the moral judgment of Barton on to the readers while still pushing the idea that the US government has their own agenda behind the scenes.

So in terms of writing, Civil War II: The Accused #1 is a pretty solid read. The art is good too, matching the serious nature of the story with a gritty visual edge. For both, it’s well worth picking up and reading. The real problem here is that it also feels somewhat unnecessary.

The main Civil War storyline has been progressing well, and while Hawkeye’s trial is important this story doesn’t seem to affect anything in the larger arc. There’s mention of a second Registration Act looming, but the main story in other comic books hasn’t reflected anything like that. As an independent title this issue hits all the right notes, but in terms of the big picture it comes across more as an addendum for completists rather than a pivotal moment.

So Civil War II: The Accused #1 is the best and worst of crossover titles. It’s a well-told Daredevil story, but as a Civil War II story it isn’t essential reading.