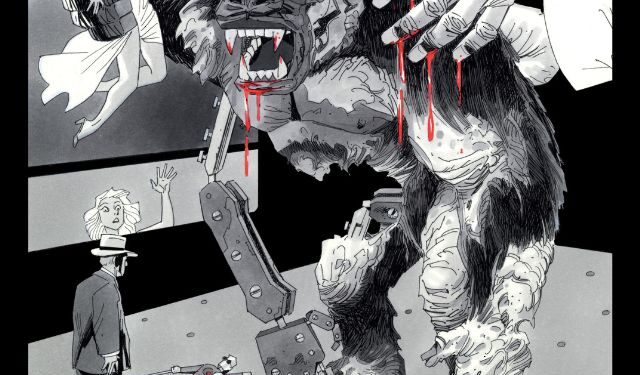 Cinema Purgatorio isn’t so much a place as a state of mind. I’ve been there four times now, and it seems that I cannot leave. Or rather, when I do and return to what I believe to be the real world, it’s just an intermission before I find myself back there. Back in that black-and-white world, which both repulses and fascinates me. Like the narrator in the story, I just can’t seem to get away from Alan Moore and Kevin O’Neill’s anthology series. But before we get to those legendary creators and their work, let’s cover the others stories contained within. [dropcap]E[/dropcap]nnis and Caceres’s Code Pru continues the adventures of a paramedic dealing with the paranormal. This issue’s installment is a standout, as an arrogant mummy tries to convince his police officer escort to make some big changes in his personal life. The mummy’s dialogue is so overblown and hammy that it’s hard not to smile. However, Modded – the anarchic Pokemon-meets-demonic entities tale by Gillen and Calero – could become a massive cult hit. This time around, Fringe finally “mods” Junior although her new friend Bloody Susan disapproves of how she does it.

The Vast, Gage and Andrade’s kaiju story, is a little short on pages in this issue but still has our heroes on the right path. A More Perfect Union, Brooks and DiPascale’s alternate Civil War featuring humans versus giant insects, finally gets into the action as the soldiers go head-to-head with the enemy. This one continues to be the weak link in this series, but it still holds potential. And now on to Moore and O’Neill’s main feature, as our narrator once more visits the cinema to watch another “classic”. And this time it’s a big one.

So far each tale has been a twisted nightmare, but in this issue it’s pushed to the limit. Real-life special effects genius Willis O’Brien’s tragic life story is played out by the giant ape he so famously gave life to in film, in the most haunting of ways. This presentation truly plays upon the mind like nothing else in comic books today. On a personal level, I was simultaneously startled by the creative nature of the way this story was told whilst being saddened and horrified by the truth behind it.

It’s hard not to read between the lines with Alan Moore’s writing. Maybe in this series it’s a matter of a cigar just being a cigar, but I genuinely doubt that. Parallels, symbolism and deeper meanings seem to be screaming from each page. It’s startling to read short stories which have this much power behind them, and I’m keen to see what Moore’s next installment is whilst simultaneously dreading it. I need to read more of this, but I do fear the worst.

Anthology comic books are an investment in time and patience, but when done correctly they can offer a grander scope and more creativity. With amazing art and great writing all around, Cinema Purgatorio offers some of the most dazzling thrills and shocking moments any reader could hope for. If they dare to journey into it, that is.

The best comic book movie out there isn’t on the big screen, it’s here in these Cinema Purgatorio pages. Right where it belongs.