Movie tie-in games have mostly been seen as quick cash grabs. These games are usually developed under strict deadlines which means that most of the time you end up with a rushed game that barely resembles what is seen on the big screen. This is especially true when it comes to games based on films aimed at a younger audience. So you can understand my skepticism when I first heard about Cars 3: Driven To Win, a racing game based on the Pixar film.

Imagine my surprise when the racing game based on a film about racing cars actually turns out to be more fun than I expected.

First things first, the most important part of any racing game is how well the cars control. I’m glad to report that the controls in Cars 3: Driven To Win are surprisingly responsive and tight for an arcade racer. It initially took me a few races to get to grips with the game’s drifting mechanic but, once I did, I was winning races in no time. You see drifting plays quite an important role in Cars 3: Driven To Win. By successfully drifting around corners players build up their car’s turbo meter which, when sufficiently filled, lets you boost past your opponents leaving them to eat a liberal serving of your dust. After a few races, it became apparent that the turbo mechanic played a much larger role than I initially thought it would. There were quite a few times when I lost a race because my turbo meter was running on empty which gave the A.I racers the perfect opportunity to boost past me unexpectedly. I was pleased to see that the A.I was more than capable of beating me when I lost concentration or made a dumb mistake. Most races would see the A.I racers breathing down my neck, which continually kept me on my toes. Having said this, I never felt as though the A.I was overly good or unbeatable. Even on the highest difficulty, it was possible to finish first as long as you used your boost at the appropriate times and took advantage of the various shortcuts that dot each course.

Another high point in the game is the course design. Each course is filled with tight corners, which forces players to perfect their drifting techniques, and features shortcuts and alternate paths that when used correctly can mean the difference between winning and finishing last. Placed throughout each course are dynamic set pieces that players need to contend with such as dodging a plane touching down on a runway or a pile of boulders crashing onto the course.

For those who get bored quickly with racing from point A to B, the game offers various types of races to partake in.

Stunt Showcase has players competing to see who can rack up the most points by completing tricks in a set amount of time. In order to score points, players must launch their cars off the various ramps scattered across the course and use the directional stick to perform basic tricks such as flips and barrel rolls. Chaining these tricks together and then successfully landing their car scores the player a number of points. The more points they have the higher up they rank. Admittedly having to ‘jump’ your car of a ramp by pressing a button did feel strange at first even though I did eventually get used to it.

Battle Race is similar to Mario Kart as players race across a course picking up weapons along the way. These weapons are then used to disable their opponents for a brief time. I have to say that this is probably my favorite of the modes, as nothing beats shooting the crap out of your opponent with rockets and then whizzing by them to take first place. Honestly, I would have preferred a larger variety weapons as most fall into the category of mines, rockets or machine guns. For those concerned for the lives of the cars do not fear, as none of the cars actually explode when hit with any of the projectiles, they merely spin out of control which makes it just that little bit more kid friendly.

Takedown is exactly what the name implies. Players must face off against waves of opponents who they have to disable using the various weapon pickups available to them. When the timer runs out the player with the most points wins the race.

Lastly, there’s the Thomasville Playground which gives players free reign allowing them to drive around the open world and perform tricks, find collectibles or just have a relaxing cruise down the road. It’s a welcome distraction in-between racing and has the added benefit of allowing players to hone their skills. As players progress through the game they will unlock a plethora of cars to use during races. Cars fans will also be happy to see that most of the cast from the movies are here. From Guido the little forklift to everybody’s favorite tow truck Mater. Each of the various unlocked cars is carefully recreated and perfectly resembles their big screen counterparts. Voice acting seemed a bit of a hit-or-miss and the fact that there are only a few voice lines recorded for each car compounds the problem. I did notice that most of the vehicles didn’t differ much in the way they played. Sure, Guido is lighter and more manageable than say Miss Fritter the school bus but most of the cars felt like they played and controlled mostly the same.

Lastly, I have to mention that the game does have a story. Unfortunately, it’s a very shallow and bland affair that is told through a couple of cut scenes. This will disappoint fans of the films who might have expected a bit more. With so many memorable characters from the films present, it feels like a missed opportunity even though it doesn’t detract from the overall gameplay. Cars 3: Driven To Win is one of the more pleasant surprises of 2017. I started playing the game thinking that it would be a quick cash grab but quickly found that it was far more than that. With its tight controls, creative levels and charming cast, Cars 3: Driven To Win will keep you racing for hours. Sure, it’s not the best racing game out there but it would make a worthy addition to any arcade racing game collection. So, grab your controller and get ready to race. 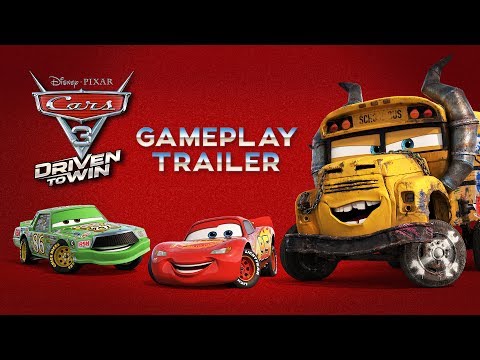