Is Captain America The New Superman? 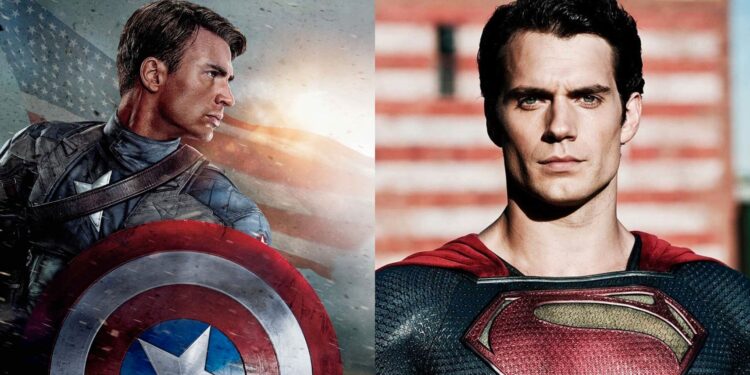 This week I read a message of apology to DC that Marvel now owns the true character of Superman and that they call him Captain America. I like that. It’s one of the best insult-comedy gags I’ve heard in ages, cutting, funny, sly and wry.

But they say that the truth is often uttered in jest. As much as we may not want to admit it, the simple truth here is that the never-ending battle for truth, justice and the American way looks like it’s being fought by a different soldier right now. I know, that old catchphrase got jettisoned quite a while ago but, like “with great power comes great responsibility”, it’s got a nice ring to it.

I may not be American, but I know what sounds good.

Superman, or at least the Superman I like, is strangely one of the most unlikeable characters I know of. He’s Mister Goody Two-Shoes and it’s hard to tell if his eyes glow red because he’s using heat vision or if he’s seeing the world through rose-tinted contact lenses. He’s not just a good guy, he’s the good guy. Unfortunately, while his Kansas farmboy upbringing might have given him a great moral code, it also made him seem… well, like a wimp. He just happens to be a super-strong wimp. Yes, Superman is a bit like Marvel’s Captain America.

That big red S on his chest is supposed to stand for hope, but, for me, it stands for so much more. It stands for goodness and a moral code that can’t be corrupted. He helps everyone and asks for nothing in exchange.

Of course, while he may be good there’s always that element of danger that at any point Superman could snap. It’s been the focus of some of the best stories I’ve ever read. I remember Rage, where Clark Kent had to deal with an abusive wife-beating neighbour or the Red Glass storyline where he hallucinated that he killed every other superhero in the DCU. And, of course, there’s the What’s So Funny About Truth Justice & the American Way? story where he made the point that it’s his self-control to not be violent that makes him a better hero.

Then you’ve got Captain America, whose costume (in case you never checked) actually bears more resemblance to the Puerto Rican flag than the old Stars ‘n Stripes. This guy wanted to be a soldier in a war, which in case you missed the memo means that he killed his enemies usually, unless it was Baron Zemo who just got a velvet towel glued onto his face. Cap was a nice guy but he was no saint. Still, he went on to become the moral compass of The Avengers and possibly the whole Marvel Universe. The odd thing is, nobody seemed to like him much either.

Still, it’s only the Captan America comics that ever printed one of my letters in the pages they used to have in the back. Don’t worry, DC, I don’t hold a grudge. My point though was that I didn’t care much for Cap as a character either. He was a symbol too but was just too patriotic for my taste, especially since – as I said, I’m not American. I’m not alone on that sentiment either, and one of the biggest hurdles the films have had to overcome was why would non-Americans even want to watch a guy called Captain America extol the virtues of the USA?

The thing is, I read the comics. Not only were they good, but they weren’t what I was expecting. Instead of flag-waving, he just inspired people with words and deeds. He didn’t talk about the virtues of the USA, he talked about the virtues of equality and human rights in general. Remember that old Hulk Hogan theme song, Real American? It was like that. He was just a guy who fought for the rights of everyone, even if it meant going against the government. He supported the country and the people, not the politics. And like he said in the film, he just doesn’t like bullies. That sounds like a hero to me.

Through reboots and heroes being reborn, New 52s and Ultimates, both Superman and Captain America have changed a bit. The essence of one of them has become more diluted while in the other it’s become more concentrated. In films, one who wasn’t supposed to kill did just that. The other, whose old job as a soldier meant killing, refused to kill his enemy and was willing to die to save him. It’s fair to argue that General Zod was a psycho bad guy against Superman, while The Winter Soldier was really a brainwashed buddy of Captain America, but it still says a lot.

One hero traded a bright costume for a darker one, while one switched his darker one for the classic with lighter tones.

So the real question is: is Captain America now the true character of Superman?

NO. He’s not. He’s close, and certainly closer to that essence than the current Superman seems to be. He’s his own character with some slightly old-fashioned values that drive him to do the right thing whenever he can, and that’s good enough for me even if he wasn’t raised as a farm boy. That true character, those virtues that made the Man of Steel such a classic hero… well, they’re a lot to live up to, even for Captain America.

I just wish they weren’t too much for Superman to live up to these days as well.