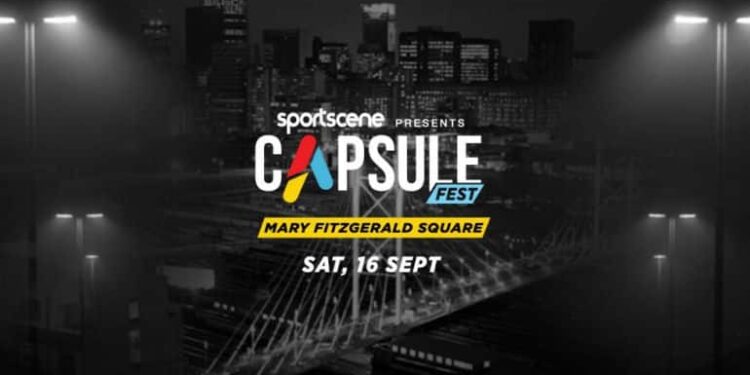 When Sportscene announced their Capsule festival, it grabbed my attention almost immediately. This was not due to the 30+ performance artists scheduled to make their way to the Mary Fitzgerald Square in Newtown, Johannesburg, but rather the growing street culture scene in South Africa, which showcased some of the best footwear brands around. Today marked the first annual Capsule Fest. Arriving as the doors were to open to Capsule Fest 2017, in the hope of beating the rush and viewing what would be on show around the area before the masses descend, I was left stranded for some time at the gates due to a technical issue. It seems a power failure of the sign-in system left many early birds waiting outside, very patiently I must add. Having been invited by the adidas Originals team, they quickly managed to arrange my access. Sadly thr rest of the crowd had to wait another 40-60 minutes before the gates officially opened.

Once inside, I quickly made my way around the venue. It was split in two, the right side for all your sneaker stalls, with the left side the food and bar court. There was a lot to do around the area, besides browsing the latest in sneaker trends, accessories and apparel.

The adidas Originals section featured some of the brands latest sneakers, along with the unreleased Flashback range for women. Moving on through the stall, creative talent Cedric Nzaka was running a photoshoot for all would-be models to show-off adidas’ newest and popular range of items. Those sporting adidas clothing were treated to a free drink in their dedicated VIP area, which had a great view of the stage once the entertainment was in full swing.

Moving through the field we encountered the Sportscene mini store, who brought along some of their more popular items this season, including Fila, adidas, and Kappa.

Next on the list was Nike’s Force stall, which featured a variety of items away from their sneaker showcase. There was a shoe shine area, a barber, and even a miniature tattoo parlour. Yes, you read that correctly. As with the adidas stand, if you were to sport any Nike clothing items on the day, it entitled you to a free haircut or Swish tattoo. And the lines were starting to stretch as the day progressed.

Walking a few metres beyond the Nike stall, I was treated to a free clean and protect service from the team at the Sneaker Lab stall, making it their mission to clean any and every shoe that came past their way. Having seen a few horribly dirty sneakers in line, I was amused by the dedication the team showed in getting each pair cleaned.

The Converse stand also featured a number of their sneakers, available to purchase, which would also entitle you to a free paint customisation from the artists on the day.

The Reebok Classics stand provided event participants an opportunity to view some of their latest kicks, along with placing an order online via their interactive touchscreen.

Undeniably the most popular area at Capsule Fest was the skateboarding section, which Converse had beautifully setup a makeshift halfpipe and some additional obstacles for all to enjoy. Most of the event participants were gathered around this area to either showcase their boarding talents or hang out and watch the others do their stuff.

Having spent the majority of the day as a VIP at the adidas Originals stand, I took my leave as the entertainment slowly started to ramp up. The event was set to continue well into the evening with artists A$AP Ferg and Nasty C expected to perform after 9pm. Even before the main acts were due to arrive and higher volumes expected in crowd turnout, the numbers were already looking good by 3pm and steadily continued to grow throughout the day.

If there was one downside on the day it was the lack of variety of food stalls, which was simply the standard fast foods, such as burgers, chips, and the likes.

Other than that, the inaugural Capsule Fest event seemed to have kicked off as a great success, which I’m sure will be confirmed once the numbers are tallied.