As with any tech product, cameras too receive their fair share of updates, although not as much as with modern smartphones. Upgrading, or not upgrading in this case, your camera, won’t have as much of an effect as the year on year changes in the mobile world, but it does have its benefits. The greatest updates for any camera are still largely based on the type of lens you’re willing to spend money on, but every so often the hardware upgrade may make a huge difference in the quality of images you produce. Earlier this year, Canon launched a wide range of products, which also included a new range of PowerShot cameras. Having received the Canon PowerShot SX740 HS, released in July, Canon manages to add new features to the camera to make it worth your while to upgrade. These features include UHD 4K video recording, faster burst shooting, as well as an updated Digic 8 processor, to name but a few. 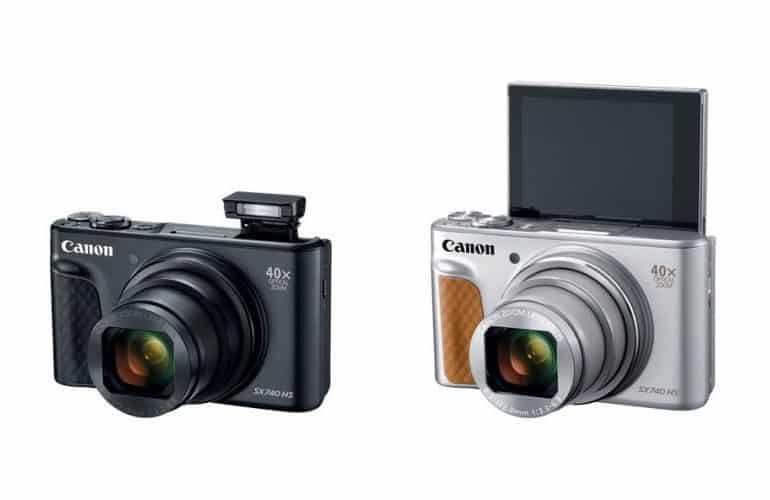 Between the release date of the PowerShot 730 HS and 740 HS, roughly 15 months have passed. On the face of it, you’d think that nothing much has changed between the two devices. For the most part, this is true on the surface. Apart from a few label changes, the two devices look largely the same, with a lot more focus on improving the internals of the latter to entice users to upgrade. In terms of the design specifications, the units have equal dimensions at 110x64x40mm. What’s interesting is that there is the slightest of differences when it comes to the overall weight, with the 740 HS down 1g to 299g. With identical builds and no mention of any major changes, I’m curious where the 1g is shaded.

Irrespective of the changes, the 740 HS is a very compact device, something I was actually able to slide into my pants pockets without too much fuss as I enjoyed taking a few snaps every so often. As with many other compact digital cameras (CDCs) the 740 HS opens its lens quite dramatically when powered on. While there are a few CDCs that offer the viewfinder as part of its build, the 740 does not, and so with preceding units from the range. Instead, it relies solely on the LCD screen, which we’ll discuss in more detail further down. The lens, once extended, can be further extended as you choose users tinker with the zoom settings of the camera. The 740, as with the 730, offers 40x optical zoom, and produces great images at maximum zoom. This already is one of the key differences between having a dedicated CDC compared to the conventional smartphone camera lens, which often tends to max out between 2x and 5x optical zoom, which can be extended to 10x zoom with the digital enhancements. The remaining additions on the front side of the 740 include the rubberised thumb grip, as well as a small sensor just off from the main lens.

The top side of the unit a number of buttons, which includes the power on/off, zoom toggle, mode (scrolling) toggle, and video recording button, as well as the microphone grill. Although not obvious when not in use, the top also houses the flash, which neatly pops up when in use, and slides back into its housing when turned off, or simply by pushing it down with your finger. Not complicated by any means. Something that could also be considered for smartphones, but a lot riskier given the lack of space available within its internals.

On the rear side, the majority of the it is filled with the LCD screen. There are a few buttons to note, all of which reside on the righthand side of the panel. This makes it easier to select with your righthand thumb for single-handed shooting and recording. Most of the buttons are fairly standard and self-explanatory, but the one useful button, on the top left side, is the “zoom finder” button. This comes in handy when you’re zoomed in on a moving object. If you lose the object during motion for any reason, you’ll be able to click this button to quickly zoom out to gather your surrounds and find the object again, and, upon release, switches back to your zoomed in setting again.

There’s nothing game-changing about the 740 HS’s build or design, fitting the mould of many others. That said, it’s still very solid, and gets the job done without too much effort or fuss. 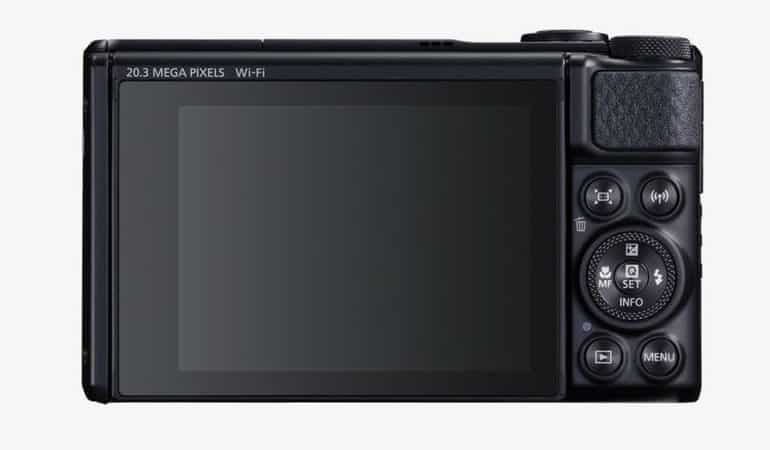 The rear houses a 3”, articulating, LCD Screen, which has a 307,200px resolution. The articulating screen is capable of tilting through 180°. This allows you to easily take selfies as the screen rotates based on how you hold it. While I’m no selfie addict, I did find the feature useful in a few instances, and is a nice to have even if you won’t always make use of it. Interestingly, the unit comes with a selfie mode, which allows you to make some capture changes such as background blur, skin smoothening, and the likes.

Where the screen is a bit of a let-down is that it doesn’t include touch capabilities. This is almost a must-have for a portable camera in 2018, and should’ve been included as an increment over the 2017 variant. What it does do, though, is keep the costs down somewhat, and the ease of use with the button configuration makes this a non-issue. It may make a small amount of difference when comparing two units with similar features and pricing.

Users are able to setup the amount of information required on the screen, or have it available on the settings menu to give you an uninterrupted view of your subject matter. The display picture itself is reasonable, but won’t give you the true picture you may require, especially for any 4K video captures. 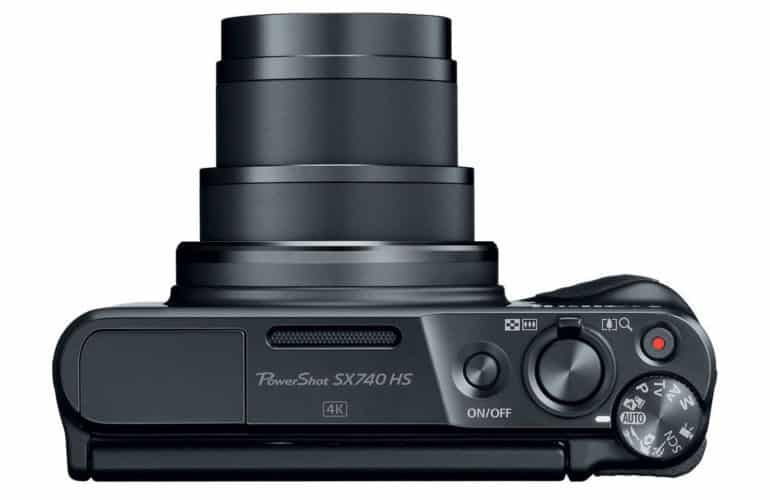 One of the most notable updates on the 740 HS is the upgrade of the burst shot at 4.6fps with AF. Compared to the previous version which had a 7.4fps, and 10fps with focus. Speaking of focus, the camera has a few focus options, including Face AiAF, Tracking AF, as well as a single frame in the centre. The upgrade also sees the ability to record video in UHD 4K quality at 30/25fps. As already mentioned, the 740 includes 40x optical zoom, and a bunch of automatic options. These auto shooting modes in Hybrid Auto mode, which takes a 2-second video whenever you take a shot and compiling them together to create a special effect. Unfortunately, there aren’t any editing options for the special image. The camera also doesn’t offer a Raw format for captures, which could allow for more editing flexibility.

The zoom capabilities are also quite easy to manage via the toggle, as well as the already-discussed “zoom finder” feature that allows you to quickly zoom out to find your moving object before releasing and going back into previously zoomed setting. While the 730 unit featured NFC image transfer, the 740 offers a more refined Bluetooth system, which allows you to transfer images captured on the fly. To start copying, all you need to do is download the Canon Camera Connect app, where there’s a few additional features as well.

In terms of overall image quality, the 20.3MP sensor produces decent images from the Fine JPEG default setting, even without the Raw format. The range of ISO settings allowed me to take good quality images any time of the day. I was especially curious with night photography given the latest smartphone night mode settings allowing for more light. While it wasn’t able to match this type of photography, I was still able to zoom and focus at a fair distance during low light shots, which was particularly great. After taken a few shots of the full moon, I was reasonably impressed with the result, which performed lightyears better than any smartphone could, despite the extra work done with low light photography.

While 40x zoom photography is a nice-to-have feature, it isn’t without some faults. For starters, there’s some slight fuzziness on edges, as it had to be kept quite still during any shot at distance. There is a slight case of chromatic aberration, but you wouldn’t notice this at all without zooming into the actual photo on your laptop after the transfer. These were only more prominent during high contrast shots. Colour reproduction, one the other hand, is done well, with balanced saturation for vibrant images.

The flash has a roughly estimated 4m range, which isn’t great, but not bad either. It does, however, have an automatic red-eye reduction in the settings, so it makes life a little easier not having to complete additional editing for red-eye removal.

In terms of the new 4K video, the new addition is a welcome bonus for an already decent camera. The unit is great for creating casual videos in 4K, but not enough professional tools for advanced users to consider. The maximum setting for video capture is 3840×2160 at 30fps, and is able to save in MPEG-4 AVC/H.264 formats. The unit also has a mini-HDMI out for playback directly from the device itself. 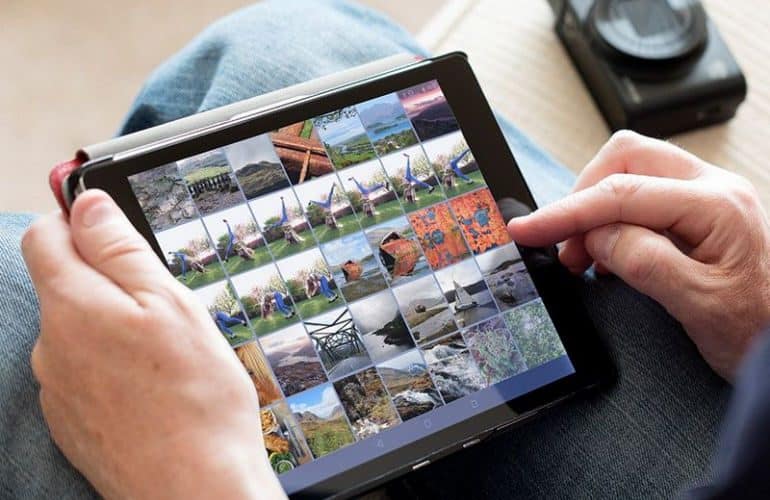 In recent years, many CPC units have come in for some stick when compared to the capabilities of DSL cameras, as well as the closing gap between smartphone cameras. That said, it isn’t as if compact cameras haven’t also made some gains as well, and the Canon PowerShot SX740 HS is one of those units. Sometimes, there’s nothing better than pointing and clicking and for things to just work. This unit does just that. I was surprised at quality of the images between day and night shots on automatic mode without changing any of the default settings. Things only get better once you do make some adjustments for the different scenes, and with the addition of UHD 4k video recording, the PowerShot SX740 is definitely worth your consideration, even if you already have a great smartphone, and/or DSL camera.

While I am curious why Canon, adding some new, decided to remove features and functionality that would have been useful, including the Raw or Super Fine JPEG images, as well as the NFC tap transfers offered on the 730 HS. The 740 HS has an RRP of R5,999, which is a little steep all things considered, but has enough features to make it useful.

The Canon PowerShot SX740 HS is a good Compact Digital Camera, showing that smartphones still have some way to go before completely replacing them.