“Come on Dover, move your blumin’ arse!” That line is from My Fair Lady when Eliza experiences “the races” for the first time. Any betting man knows that betting on horses is not a gut thing, just check those betting websites. It takes research and planning, keeping records of the performance of specific horses and their riders, including recent injuries. Of course, you can bet on the sure thing, but the odds will be lower and your win smaller. You’re looking for that outlier, that unexpected win. That’s where the thrill is. In a weird way, this is the effect of Camel Up (or as some prefer to call it, Camel Cup). On first impression, the game seems swingy and random but the more you look at it the more sense it begins to make. 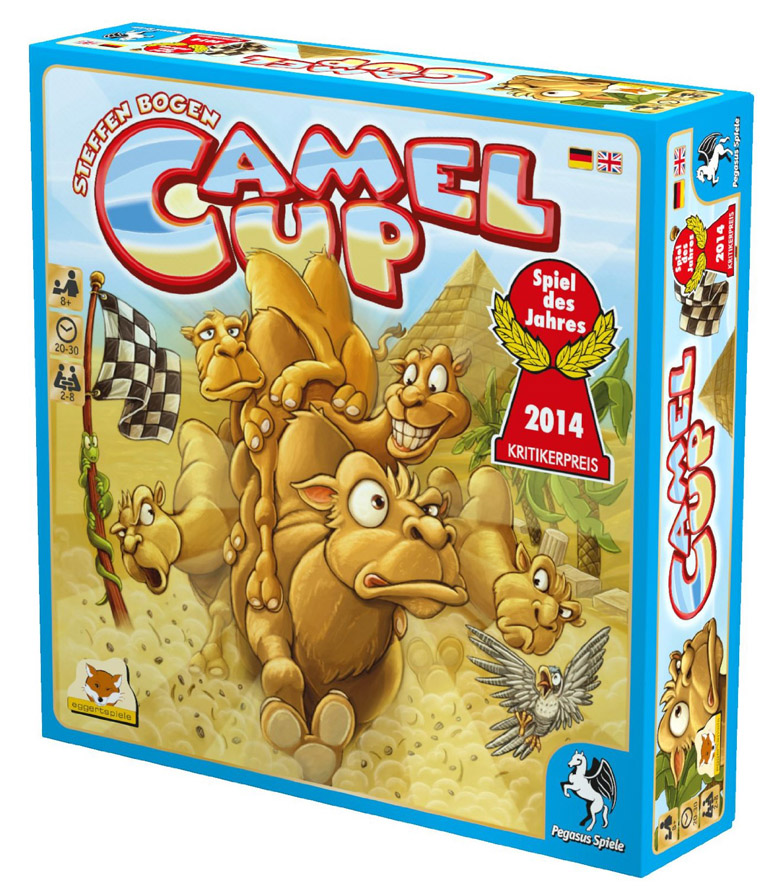 In the board game Camel Up, Camels are placed in starting positions on the board according to the number of players. In the pyramid-style dice shaker goes a die for each camel, all identical. Each player gets a set of betting cards. And they’re off! (sorry, this is going to get very punny).

A race is broken into several legs (usually four, sorry). On your turn as one of the possible actions, you can advance the race by taking a tile (worth $1), ejecting a die from the dice shaker and moving the camels accordingly (1-3 spaces). If you took the last token, the leg is over. Instead of advancing the race, you can take a token for the camel that you think will be in the lead at the end of the leg, or place a bet for the overall winner or loser of the race. These actions don’t advance the race but does end your turn, so it’ll be a while before you get to make a choice again.

Now the bits that make this interesting. Firstly, when a camel moves it takes along all the camels on top of it. A camel that’s on top is technically ahead (by a head? sorry…) of the ones underneath, so if a camel moves onto a space and gets placed on top it has passed those camels,and even though its die has been ejected it could still move if one of the camels underneath it were to move. This allows for amazing combinations of camels moving together and the one on top moving far ahead.

The betting tokens go down in value the longer you wait to place your bet. The first person to bet on a horse, I mean camel, gets the most money for it. As the position of certain camels become more set, everyone will rush to bet on them but the values of the remaining tokens are lower because the odds have diminished. The player taking a big risk (or planning ahead) will earn more but won’t have as much information. The player that bides their time will always win but will win less on each bet.

This seems, as I said before, to be very swingy until you start taking stock of the information on the table. At any given turn you can see which camels have moved, which are yet to move and which camels will move along with them when that happens, how many bets have been placed on a specific camel to win the leg, how many bets have been placed for overall win/loss though not for which camel. After a few turns, you start reading the actions of other players, expecting a certain player to advance the race rather than bet, giving you a little more information before your turn. Then you take the risk and make that left-field bet because most mistakes in the game will only cost $1. Suddenly everything happens in the exact combination you expected. It’s an exhilarating feeling when it happens, but more often than not the smallest thing happens that makes the whole plan fall apart.

After our last game of Camel Up, I was partially deaf in my right ear, thanks to my brother in law’s elation. During the second leg of the race, he placed a bet for the win (horse racing reference long before the internet made it a thing). The specific camel he bet on was in third at the time. By the end of the race his camel was ahead by several lengths (last pun, I promise). 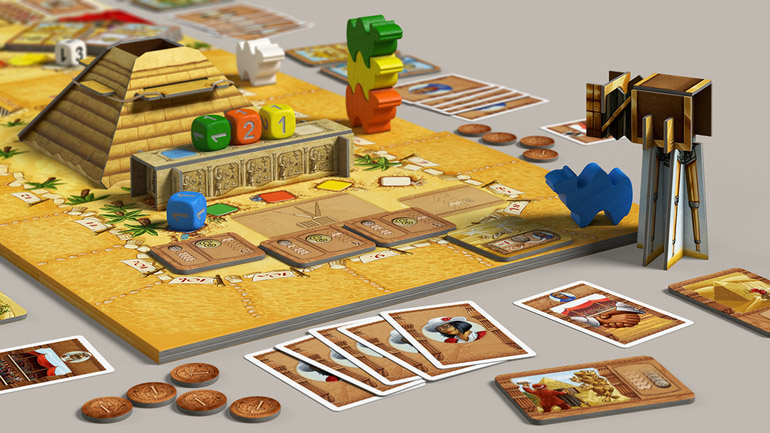 Camel Up is by no means a serious game. It’s light-hearted fun with a quirky theme and is over in about half an hour, but it begs to be played again.

Components: 3/5. There’s not much to the game. A bunch of cardstock tokens and a few nice wooden camels. The gimmicky dice roller thing is thematic and comes with spare elastics, but could’ve been a simple dice holder like Zombie Dice. As long as you don’t look when you draw it works
fine.

Complexity vs Depth: 2/5. Not particularly complex, but it doesn’t need to be. There’s a layer of meta-knowledge that comes in handy but it’s still probability above all else.

Theme: 3/5. Kinda cute, but could’ve been anything really.

Overall: 3/5. Good fun, reasonably short, should probably be played twice in a sitting so that everyone understands what’s going on for round two. But winners know when to stop (Sorry, I couldn’t resist!)

This Is The Batman: The Animated Series Board Game We Deserve