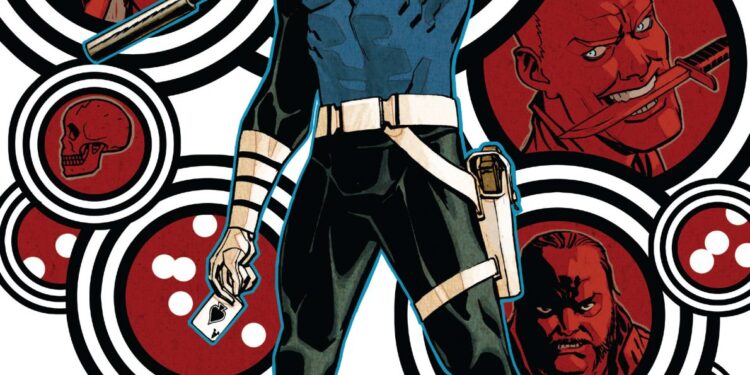 The superhuman homicidal hitman has been gone for a while, but he’s back in Bullseye #1 – and determined to prove he’s still got what it takes. He’s also keen to prove that he’s still the same bloodthirsty maniac he’s always been. After a quiet job he was doing makes the papers, he’s forced to visit his agent and find another one, one preferably where he’ll be out of the spotlight. He takes an assassination assignment in Colombia, but is being out of the spotlight something Bullseye can handle?

In the backup story, Bullseye is captured by a mob boss and is about to be tortured for the information he’s stolen. But, as Bullseye keeps warning his torturer, if he tells him then he’ll have to kill him – and when it comes to killing, Bullseye is a man of his word… This is one of the strangest comic books Marvel has released in recent history, simply because it’s hard to tell who it’s aimed at. Unlike the Kingpin mini-series, Bullseye isn’t quite enough of a complex character to make you interested, nor is his throwaway brand of violence enough to pick up the Deadpool or Punisher fanbase.

Bullseye #1‘s plot and writing are decent enough and all the main characters are introduced in a straightforward way. However, it’s hard to tell if this is supposed to be a gritty drama or a dark comedy, due to a somewhat uneven tone. Bullseye may be a crazy psychopath but he isn’t stupid, yet some of his murders are ridiculously over-the-top and unnecessary. Likewise, a vengeful cop on his tail may be mourning the loss of her husband, but you’d never know it from her clumsy dialogue. Unfortunately, the art doesn’t help clear up this confusion, and at times I didn’t know how seriously I should be taking this. The backup story is something slightly different. It’s a by-the-numbers scenario with an outcome signposted so clearly that you’ll see it coming right from the start. Yet, like an old episode of Columbo, this isn’t a matter of solving the mystery as seeing how the resolution will unfold. In this way, it’s an incredibly satisfying piece of writing from the legendary Marv Wolfman which builds the tension nicely. Once again, the art on this lets the writing down and, because of that, it feels like a wasted opportunity to steal the show.

For fans of Bullseye – and there are some out there – there’s plenty in Bullseye #1 to enjoy in terms of the body count he leaves lying in his wake. For anybody else, it probably won’t sway them into making this a regular purchase. There’s promise here, but it needs a bit more polish.