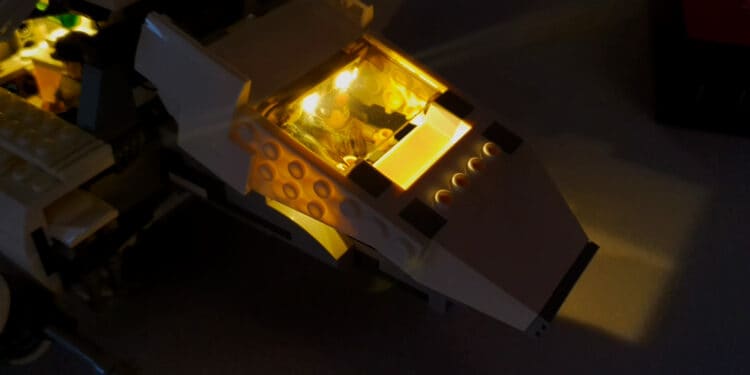 We used the Briksmax by Lightailing light kit to add swagger to a LEGO Imperial Shuttle, and the results were great.

Like me, there are many fans around the world who love LEGO. Over the past few years, I’ve managed to add a few playsets to my figuring collection. These includes various items across different franchises, including Star Wars, Disney, Avengers, Super Mario and more. My LEGO collection is always on display in the study amongst my other collectables.

However, there is a brand that has been making waves recently. Their aim is to bring new life to many of your prized LEGO sets by adding lighting effects. Lightailing has been operating for the past seven years, offering LED lighting options for various LEGO sets. I recently received the Briksmax by Lightailing: Imperial Shuttle light kit and got straight to it. 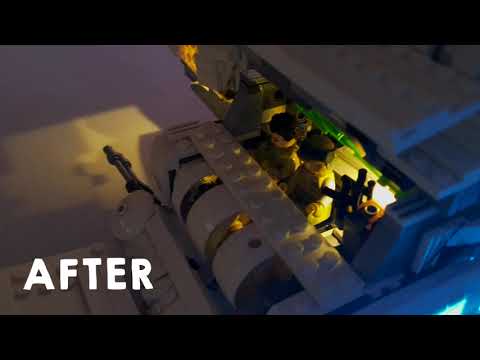 Getting to Grips with Briksmax by Lightailing

When I first received the Imperial Shuttle a few years back, it took approximately three to four hours’ worth of building time. There is a lot of detail within the set, which allows you to move the wings, open the cockpit and side doors, a few minifigures, while also featuring working guns.

Needless to say, when I received the Briksmax by Lightailing I was a little troubled as to how I was going to rework all of those LEGO bricks to run the required wiring for the lights. Thankfully, when unboxing the contents, the first thing you’ll notice is the manual. And it’s quite detailed. For this particular build, there are over 150 steps to follow in putting it all together. This level of detail from the instructions put my mind at ease as to the task ahead. That’s not to say it was any easier than I had imagined.

While you’re not going to be taking the complete set apart, there’s still quite a bit of rebuilding to be done. Each of the LED lights have wiring attached to it, so it’s important not only to position the lights correctly but also how you lay those cables once that has been positioned.

Lightailing also includes a few additional pieces of LEGO bricks. These are needed to change swap out some of the previous transparent bricks to allow for the LED lights to be better placed. 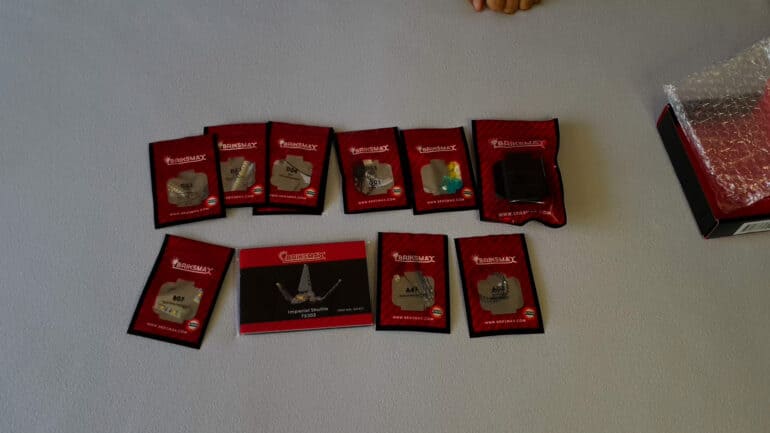 The first few lights were a bit tricky. You’re not quite used to how to position the light itself while also needing to add the transparent LEGO brick back on top of it. I had a fear that when pressing down on the brick to put it back into place it could damage the cabling. Thankfully, the wiring is quite thin and nearly flat at the front end. Additionally, there are also one or two spare wires adding into the mix, so if you do tear one, it can be replaced.

What I found interesting was the build time was fairly significant. It’s not quite the same levels of the initial build, but having spent nearly three hours in getting everything set up to power on the lights for the first time, takes close on three hours. Yes, I could’ve completed this in 30-60 minutes quicker had I not been so tentative in the beginning. 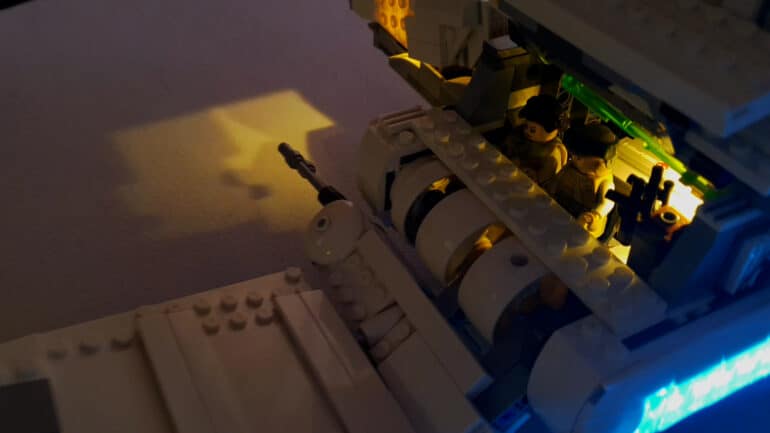 One of the trickiest aspects of the build it clipping in each of the cables to the controller modules. In this instance, there are two sets: one which connects the inner and wing light cables and the other which connects the rear lights. The control modules are separated as there are 10 on the rear and only five on the rest of the shuttle. The cables’ endpoints are fairly small. While plugging in one isn’t an issue, it quickly becomes challenging once you start to add more to the control module and not being able to easily manage to add more given its size.

After the build is completed, you have two options as power sources. Lightailing has included both a USB power option, as well as a battery-powered control box. The battery box includes an on/off switch, which allows you to power it on when you want. The USB option, however, doesn’t have this option, and powers on as soon as it’s connected. 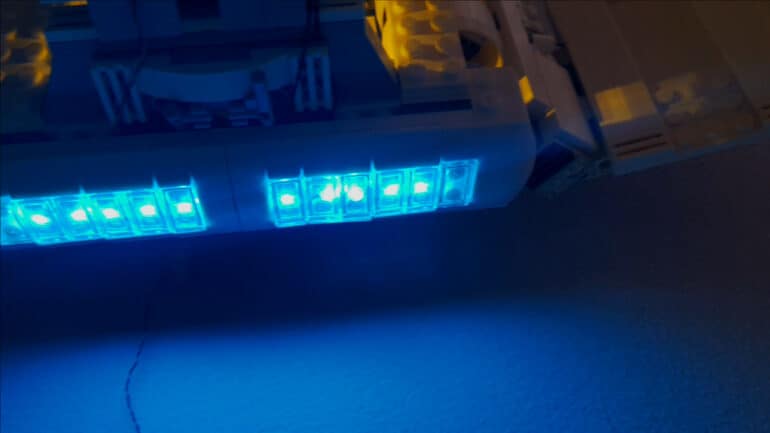 Time To Turn the Power On

I was a bit concerned at the point of connecting the power source. Having spent all this time wiring the cables, the time came to put it all together. The question running through my mind at the time was whether it would, indeed, power on and I’d get to see the lights.

It did just that. Hooray!

I was dreading having to redo everything had it not worked. Lightailing adds a second document within the contents. This is labelled as the User Guide. What this provides is an overview of best practices, while also giving you tips on what you should be looking out for.

What it also advises you to do is to test all the components prior to starting your build. Having gone through this document, I had not viewed this portion, with most of my attention focused on how to place the LEDs and running the cables underneath each of the LEGO bricks. 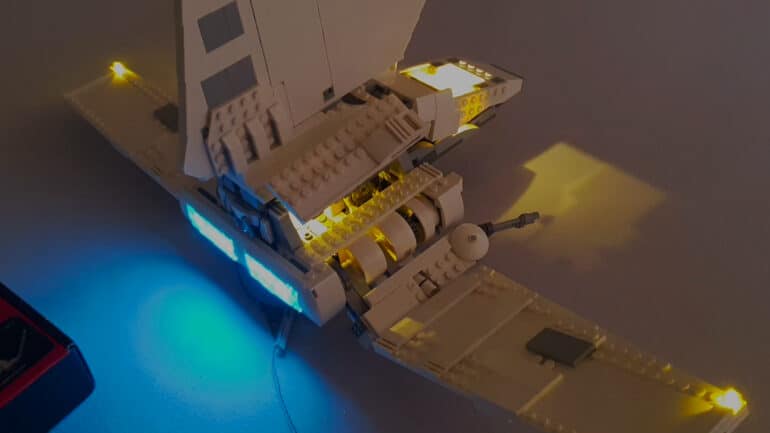 Is the Briksmax by Lightailing Worth It?

The end result is amazing. The Briksmax by Lightailing is a great LED lighting option to breathe new life into your existing set. Although it was a challenge to rebuild part of the shuttle, it was not only worth it in the end, but it was also fun.

The instruction manual is fairly detailed, making it easier to understand what to do. That’s not to say that it’ll be easy to carry out that instruction. Overall, adding the lighting to your LEGO set adds a small bit of electronics to your knowledge set, however small that may be. Having loved playing with LEDs, cables and soldering as a kid, it brings back memories of those good times experimenting.

This specific set, Briksmax by Lightailing: Imperial Shuttle is available via the Lightailing website. There are plenty of other sets to choose from and range from basic to advanced lighting options. The products ship from China, although I had no difficulties in receiving the delivery, within two weeks of it having shipped out.

While the brand offers quite a few options of sets to choose from already, they do include an option to suggest new LEGO sets via the website. Here you can list a specific set you may have that isn’t yet included. If it’s popular enough, you may have the option available in the near future.

The Briksmax by Lightailing: Imperial Shuttle is great. The lighting effects after the build is nothing short of amazing. While it is a bit of a challenge and time-intensive to semi-rebuild the set to position the LED lights and cables, it pays off in the end. It definitely brings new life to an existing LEGO set you may have at home.