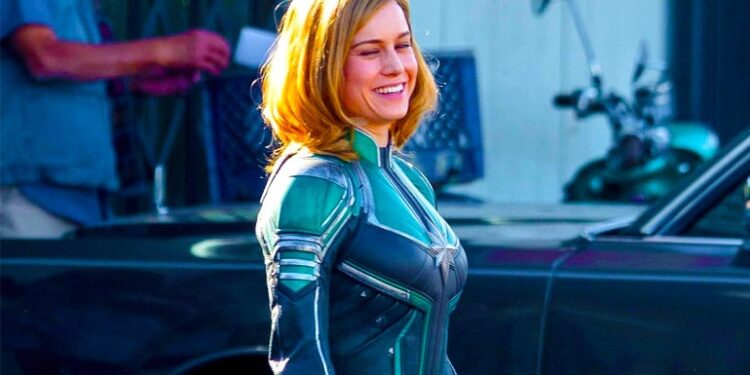 Those who have seen Brie Larson in costume as Captain Marvel on the set of Infinity War (possibly a post-credit scene) will probably be surprised by the colours of the suit. The iconic red, blue and gold have been replaced with a green and silver colour scheme. As it turns out, the green suit is most probably Carol Danvers‘ first costume and points to her Kree-based origins. It’s most likely that we’ll see a red, blue, and gold suit at the end of her own solo film though. Still, impatient fans made their disproval known.

In the comics, Captain Marvel doesn’t start off her journey with the classic suit either. It wasn’t until her 2012 comic series, by Kelly Sue DeConnick and Dexter Soy, that she made the switch to the iconic look. Before that moment, Carol Danvers was known as Ms. Marvel and only changed her name and look when Captain America convinced her to take over Mar-Vell’s legacy after he died.

Knowing that Captain Marvel is set during the early ’90s, it’s safe to assume that she might get a new look later on, most likely by Avengers 4. Maybe Tony Stark has a hand in updating her suit too?

Of course, none of this has stopped angry fans from sharing their “fixed” and “photoshopped” looks of the suit:

Here is what #CaptainMarvel will look like when the she has the comic suit! #MCU Credit to Unknown for Photoshop pic.twitter.com/8tyiv4bkBu

The first pictures of #CaptainMarvel's costume are out, and it looks pretty good. I would imagine the 2nd costume would have the traditional colors and would look something like this. pic.twitter.com/LuTdQEo2Fx

Um. What. Why. #CaptainMarvel pic.twitter.com/vRTJMo8PAQ

@CaptMarvelNews no idea if this is what the suit will end up looking like, but I used my admittedly terrible photoshop skills to try and piece together what the actual colour scheme will look like for Captain Marvel. #CaptainMarvel pic.twitter.com/K8IvXWjVUY

Recolored the costume and went the extra mile and made a poster @brielarson #CaptainMarvel #BrieLarson #Marvel #Edit #Poster // #FanArt pic.twitter.com/BGvhlcpKgI

#CaptainMarvel @brielarson reading all these tweets calling her a discount power ranger pic.twitter.com/7HTcdt0gUE