Every time I receive a video game for review, I wonder if it could possibly be the best title I’ll ever play. I’m an optimist like that, you see, and it’s paid off. I’ve been fortunate enough to play some incredible games, some not-so-great ones, but nothing that’s made me outright furious. Not until now. On paper, Bravo Team sounds like it should be the bee’s knees. An immersive first-person cover shooter by Supermassive Games for PSVR? What could possibly go wrong, right? Well, I’m shaking my head at how a legitimate games developer stuffed this up to this extent. Unless someone is conned into buying this or purchases it purely because of the name of the studio involved, I don’t see anyone willing to part with their money over this.

Bravo Team is shockingly bad. Imagine the sort of game you download for free on your phone or tablet, but with far more limitations and lack of movement. Now remove all the fun and moments that make it worth your while and you’ll understand exactly what I had to deal with here.

It’s 2018, and video games have no right to look ugly. Yet, Bravo Team did its best to prove it’s still possible if you try hard enough. The character models are clunky and disproportionate, and the environment looks like it used Barbie’s square dollhouse for inspiration. I wish I could say that the shoddy graphics are the biggest dissatisfaction, but it appears to be the best of the bad. While the developers did their best to prevent you from experiencing nausea from all the movement in VR, you’re now prone to constant camera glitches due to the limitations enforced. So, enjoy staring at the wall, peeps, because you’ll be spending a lot of time doing that – mind you, considering the disappointing entertainment value this provides, maybe my time could’ve been better spent doing just that.

The controls and movement are jarring and frustrating, leaving you wondering how someone couldn’t develop a better game in this current age. In what’s meant to be an immersive title, it feels anything but as the only emotion you feel is unadulterated frustration. You can see this product was obviously rushed and shouldn’t have been released – never mind as a PSVR title.

Then, there’s the three-hour campaign mode. While there’s a glimmer of hope here, it quickly falls apart as well. It tries its best to rescue the game from its own device, but it becomes superfluous in no time. Bravo Team parades itself as a modern-day version of Time Crisis or Rainbow Six, but it’s far from it and shouldn’t even be mentioned in the same breath. It feels like a Grade 10 class designed this game as an end-year project, with the help of a first-year computer programmer. Actually, I take that back – I think they’d still be able to at least make a fun or entertaining game. Bravo Team is simply a mess. 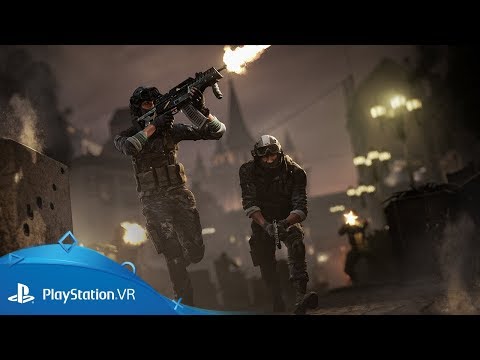