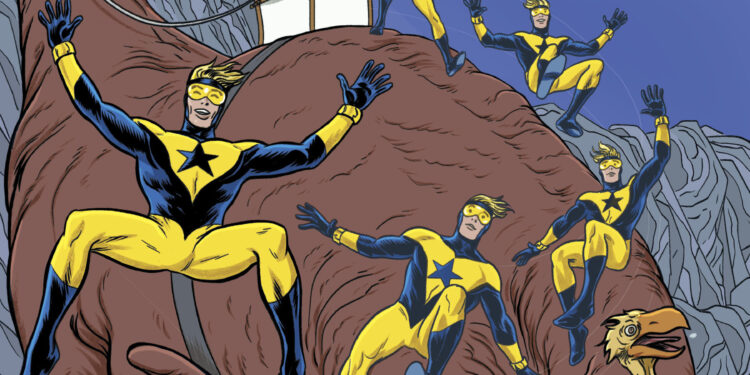 Okay. I’ll say it. This is one of the best, funniest Booster Gold stories of all time. We review Booster Gold/The Flintstones Special #1. Booster Gold has a big date planned in the future, and for the time travelling hero that future is now and the place is Gotham City. The future isn’t all it’s cracked up to be – almost all animal life on the planet is extinct, his bank account is down to next to nothing, and now alien invaders have gone on a rampage. The solution seems simple enough: go back in time to the first alien invasion and stop them at the dawn of history. That means a trip to the city of Bedrock, 20 000 years ago.

In typical Booster Gold fashion, things go wrong almost instantly and it’s up to Fred Flintstone and Barney Rubble to bail him out. But will their actions save the future or make them worse? Meanwhile, in the Jetsons backup feature, a personal family matter involving George’s mother is about to turn their family dynamic upside-down…

The crossover may be a complete stretch and is arguably one of the dumbest things ever, but it’s so fun that you simply don’t care. It’s comedy gold of the highest order, as Booster blunders in his mission through time in a way which would make Bill and Ted proud. Ignoring all potential paradoxes (and whatever lessons he may have learned from Rip Hunter in previous series), this Booster is having fun and flying by the seat of his pants.

Yes, there are drawbacks to this. The Flintstones themselves are wasted in Booster Gold/The Flintstones Special #1, contributing very little to the actual plot. The plot itself is rather obvious and simplistic. The overly-large panels on every page mean that they could have squeezed in more story and dialogue if they’d paced it better. However, all of these gripes are insignificant when compared to what’s on offer. Jokes about four hour erections, using dead aliens as hand puppets, a cameo of Batman ‘66s Alfred, in-jokes referencing Doctor Who, Luke Cage, Gilmore Girls, The Who and countless others, they’re all on display and the end result is laugh-out-loud hilarious. Sadly, the same can’t be said for the Jetsons backup feature, which is ill-timed and out of place. Despite its ending, the story revolves around euthanasia. After the light-hearted romp of the main story, the Jetsons storyline is a serious downer which leaves a bad taste in the mouth, and frankly this issue would have been better served without it. It brings the whole thing down.

In spite of this, the rating here is based solely on the Booster/Flintstones main story. It really is that good and that entertaining, and nothing should be allowed to bring it down. Booster Gold/The Flintstones Special #1 lives up to its title completely, because it truly is special.Booster Gold