Over the past two years there’s been a slew of indie games released, a lot of which have passed through Steam’s Greenlight approvals and the likes. What started off as opening up a world of raw gems to the market for the fraction of the price of AAA games, quickly turned into a farmyard, trying to find a needle in a haystack when looking for the more stand out games. Every so often, though, I’m treated to something great. One such something is Bokida: Heartfelt Reunion. 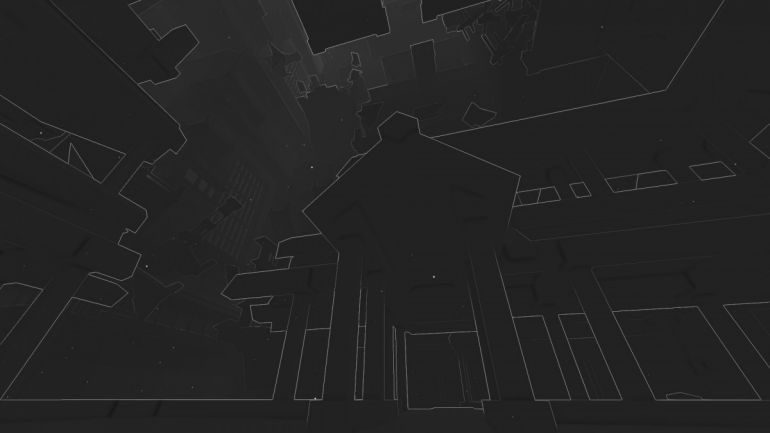 Bokida blends a few of my favourite styles into one package. It’s artsy, it’s minimalistic, and it’s somewhat intellectual. While artsy indie games are a dime a dozen these days, Bokida is well put together and can be enjoyed for hours at a time. What’s more, you don’t really have to follow any sort of pattern to playing through the game if you don’t want to. You can simply enjoy the scenery, enjoy the tools at your disposal in the game, sit back and enjoy some zen moments. Explaining the concept may not lend itself to finding balance or calm, as you’re essentially ripping up entire segments of the landscape if you so choose, but it very much plays out that way. 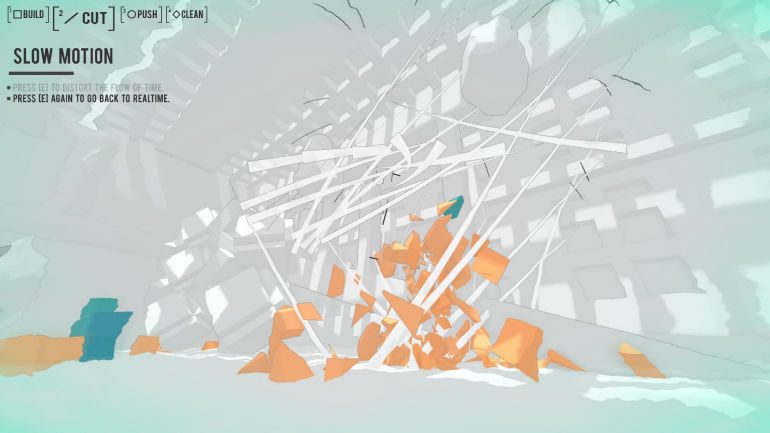 The gameplay is straightforward. You play in 1st person view with the standard range of movements, the only differences being your ability to jump higher with a double tap, soar through the air with an additional tap of the same button as you descend, or drag yourself towards an object you created to get there much quicker. The tools you’re able to control include building, chopping, push and clean. The build function allows you to, uh…build. Seems simple enough. Players are able to build from any surface, which creates a blue square that’s not interactive in the environment. The other three tools are only usable once you’ve built something. Cut pretty much means what it says. You cut the square in an angle you want. There are various reasons to choose to cut, most of which require all four tools together. For example, if there’s a wall you need to get through, simply build a set of squares, push them into the wall, cut them apart to destroy the wall, effectively, and then clean up your mess. The last option intrigued me a little, as I wouldn’t necessary consider cleaning up my mess in-game as something worth doing. But, given the nature of the game, the amount squares to build and cut, which creates endless amounts of smaller objects, will start to take its toll on your computer’s hardware. 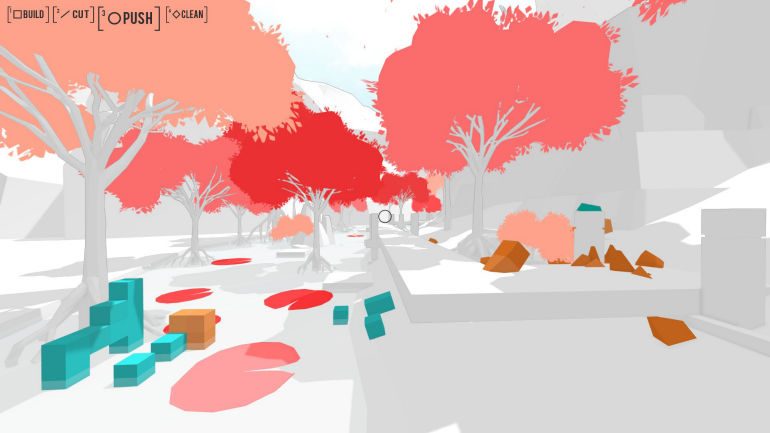 There’s a lot more to the game than building and smashing and cleaning up after yourself. If you choose to, that is. The story plays out quite slowly to start off with, with the player gaining access to new tools and abilities as you progress, as the above-mentioned aren’t all available from the get-go. Adding my next sentence may seem a bit oddly placed given the rundown of the game thus far, and the fact that I can’t elaborate too much on it considering that the game is about exploration, and I wouldn’t want to spoil that for anyone. It is, though, a love story. Yes, that’s correct. A love story. During the playthrough, you’re met with a certain amount of puzzles and challenges to overcome in the process, which also adds another dimension to the game. The game is narrated in Japanese by a soft-spoken woman as you work your way through the ‘levels.’ For some, it may come across as annoying, and some tolerance has to be practised, and some thought given to it to make sense of it all. Or, as with everything else, you can ignore it as mindless utterings of a lunatic. 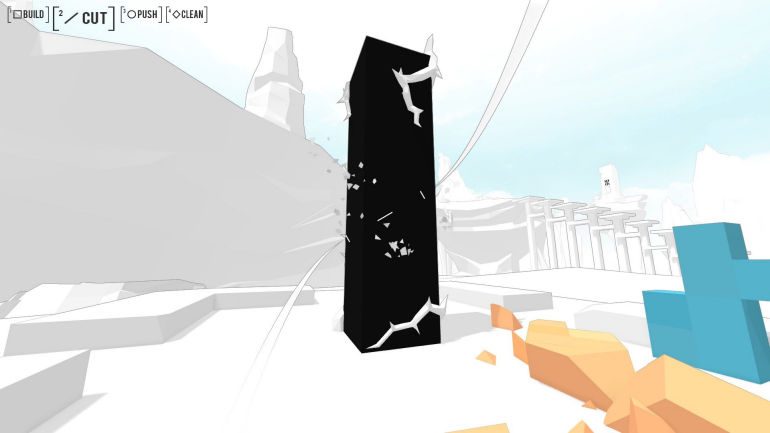 I did, however, say the game is quite minimalist, and despite what may seem a complicated premise and strange controls, the game is what you want it to be. After just a minute or two you’re able to master elements such as building, which not only includes objectives such as breaking through walls, but also to scale tall cliff edges, or activating monoliths. And, fundamentally, that’s what I find most appealing about Bokida. There’s so much to do, and not do at the same time. If you really want to, you’re able to play through the puzzles and challenges and complete the story in four to five hours, but then you’ll be missing out on so much more of nothing. And if you’ve learned anything from Master Gouken, it’s to use the power of nothingness.