Blue Beetle #9 Review – Another Step Up In The Right Direction 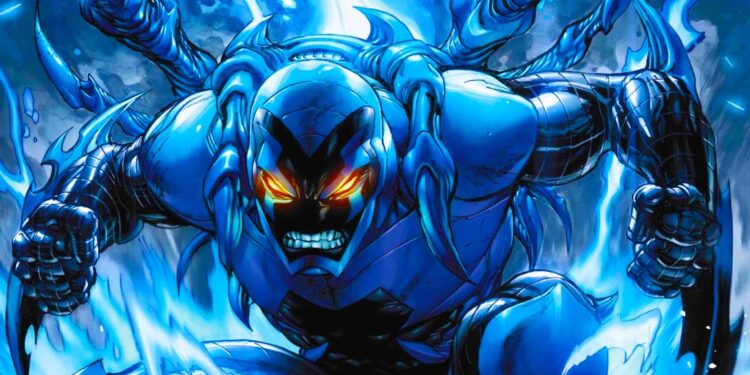 In Blue Beetle #9, it’s training day for Jaime Reyes. With the Scarab taken from him, he now dons the familiar old costume of his mentor Ted Kord – the previous Blue Beetle. Without his own armour and adaptive technology, however, he’s having to become a hero from scratch. But with Arion’s dark evil spreading and OMAC’s allegiances being an unknown factor, it’s going to be a bumpy ride. An assault on Arion’s burial chamber becomes a fight for survival, but can the helmet of Doctor Fate be the key to victory? This series is fighting an uphill battle. With so much attention focused on DC’s bigger titles, the mystery of the button and what role Watchmen really plays in Rebirth, this series seem trivial to some readers. The current storyline seems to have been dragging for a while, the light tone used here won’t be for everyone, the art isn’t the prettiest or most eye-catching, and the one-dimensional villain comes across as woefully out of step with modern trends.

But what might be viewed as flaws by others are also this Blue Beetle #9’s best points.

Firstly, some classic banter returns to brighten up the end of the world. More than that, there’s a sense of natural camaraderie building between these characters. We know that they’re completely out of their depth in the fight, but there’s still time for an occasional joke and that’s one of the things which makes this so compelling.

Yes, Arion is an overblown windbag of a clichéd demonic comic book villain, but there’s a kind of self-serious hamminess about him which makes him seem like an old JSA villain. With so many comic books these days being intent on telling massive ground-breaking stories, it’s great to read one which is a throwback to the good old days when it was all about action and fun. Then there’s the core trio of heroes in Blue Beetle #9… It’s no surprise that when many think of Blue Beetle, they automatically think of Ted Kord’s best friend Booster Gold. Booster has been notoriously absent in the DCU lately (with the exception of hanging out with the Flintstones), but with Ted Kord on hand there’s always been the potential for comedy. His bickering mentor/student relationship with Jaime has been entertaining, but it needed some fuel for the fire. Finally, Teri – the future Flash – provides it, upping the fun factor immeasurably. Plus there’s a great Doctor Who reference, which fans will appreciate!

The writing flows, and while the art may not be the slickest it’s a style which still works. Creating a vibe more of an independent comic book than just another cookie cutter title from DC, it makes this series seem like an underdog – which, technically, it is anyway.

It’s another step up for Blue Beetle and, hopefully, it’ll continue to move in the right direction.