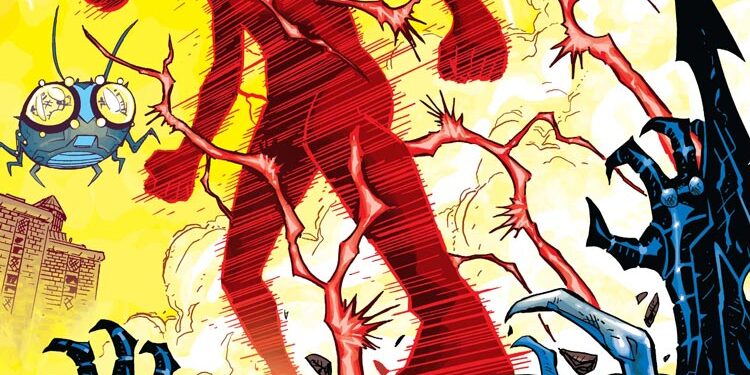 Picking up from the last issue, Jaime Reyes – the Blue Beetle – tries to continue with his investigation in Blue Beetle #2, except he’s having a few problems. [dropcap]F[/dropcap]inding out from Ted Kord that his own mother is the doctor who’s treating the metahuman street gang known as the Posse is bad. Arguing with Ted Kord in front of the Posse (when they can’t hear Ted or are even aware of him) makes Jaime look like he’s insanely arguing with himself, which is worse. But having to fend off the passive-aggressive flirtatious behaviour of Posse member Blur, that’s enough to make anybody’s day lousy…

Right off the bat, let’s get the negatives out of the way.

Some people may not like the art. The progression of the A-story from last issue is almost ignored completely. There’s almost no action to speak of, either. Some of the pages may be a little confusing in denoting who’s talking, while the lack of any sort of recap won’t help to clue new readers in about what’s going on. Got it? So if you’re considering buying this, then be warned. HOWEVER… That being said, this is also one of the funniest issues of anything which DC has put out in years. More akin to a classic JLI tale in structure, this basically amounts to a superhero equivalent of a Pepe Le Pew cartoon. Blur is such a hilariously demented flirt that she’ll shift from drooling over Blue Beetle to insulting him before praising him once more, all in the space of a single panel. She’s the sort of person who makes Harley Quinn look positively stable by comparison.

I have to confess that initially I found this issue a little difficult to get in to, yet the rewards made it more than worthwhile. Anybody who’s ever had to deal with a crazy ex or a passive-aggressive current romantic interest will instantly be able to relate to this. Blur’s love/hate flirtation with Jaime builds to new heights on every page as he tries to distance himself from her, and it’s a guilty pleasure that I kept wanting more.

Not only that but there’s some progression in laying the foundations regarding all of the supporting characters. It may be a series of small steps to make Jaime’s life more interesting to readers, but it all counts and it adds up to more than the sum of its parts.