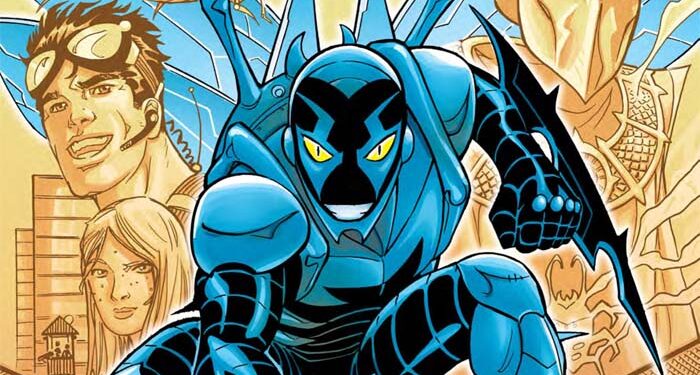 Things aren’t going well for Jaime Reyes, better known as the current Blue Beetle. He’s been having some strange dreams about Doctor Fate lately, ones which haven’t been good. Inventor Ted Kord, the man who insists on being his mentor, has shown up at Jaime’s high school career day and given the sort of speech which is supposed to be inspirational but wasn’t. Also, he’s just been sent on a mission by Ted based on a tip-off from… a street gang? And that’s when things get even worse. It’s hard to know what to expect from this latest Blue Beetle series, but the one thing fans want is fun. Thankfully, this issue delivers plenty of it with the two main characters, and once again they both get a fair few moments to shine. There’s plenty of action and adventure too, and it isn’t an insult to draw comparisons between this and the classic run from the ’80s. In fact, it’s a very good thing indeed.

While the art still may not quite be the style which some had hoped for, it still flows smoothly and conveys the energy and enthusiasm this series is trying to project. Since both writer Keith Giffen and artist Scott Kolins are credited with the story together, it’s fair to give the artist more than enough leeway to let him show the story as he wants, much as Giffen did back in his old Legion of Super Heroes days. Likewise, Giffen deserves credit for bringing life to this issue’s script, peppering up a solid adventure with some of the funniest back-and-forth dialogue in recent years. It’s every bit as good as anything he’s ever written, dropping one-liners from the very start and giving great lines to Jaime’s friends, as well as Jaime and Ted themselves – whose unlikely teamwork and bickering is a joy to behold.

As a character, Blue Beetle has never quite gotten the respect he deserves from the superhero community; as a title it’s never quite gotten the respect it deserves from comic book readers. But even in this latest series it’s an enjoyable read which should entertain die-hard fans and newcomers alike, even if it is one of the more overlooked entries in the New-ish 52 Rebirth-y DC roster.

So put aside your Trinitys and your Justice Leagues and give this a whirl rather. It’s definitely better, well worth your time, and should keep you coming back for more.