On a budget of just $60,000, the original Blair Witch Project garnered huge success as a horror film, mainly due to the great marketing campaign in the build up to the film’s release in mid-1999, which lead most people to believe the events of the film to be real. The infamous, and shaker handy-cam approach also added to this notion. While the reviews and opinions remained mixed for the actual movie, the box office success made the sequel almost inevitable. Released in 2000, Book of Shadows: Blair Witch 2 was poorly received. Fast forward to more than a decade later, the Blair Witch trailer surprised many at the San Diego Comic-Con in July 2016. In 1999, distributors, Artisan, picked up the film for $1m, which may have seemed like a risky ploy, but soon watched as the money rolled in. This time around, Lionsgate picked up the rights to the franchise for the new sequel directed by Adam Wingard. The story follows the search mission of James, as he goes looking for his sister, Heather, who disappeared in October 1994, as part of the original group of filmmakers, after one of the tapes were found in the woods and uploaded to YouTube. Film student, Lisa, seeks to document the whole ordeal, and the pair inlist the help of their close friends, Peter and Ashley. Before setting off into the Black Hills Forest, the team seek out “Darknet 666”, an oddball couple, who made the discovery of the lost tape, and forcefully convince the team to tag along.

As with the original, Blair Witch is based as a “found footage” movie, although, unlike the original, we’re well aware of the fact that the movie isn’t real…at all. The filmmakers – the actual filmmakers, not the actors – attempt to recapture the mystery and intrigue of the original, and kept the film under wraps by filming under the title, The Woods, to avoid any buzz. But, while the original spawned a trend of ‘faux found footage’ films, the sense of reality is diminished as a result of the countless other films of such nature. So the ultimate question here is, “does it seem real enough?”

Without diving too deep into the story, the simple answer is “no”. For me at least. The movie can be split into to aspects, that being the story that plays out, with all the characters, as well as the scare factor. While horror movies are predominantly judged on its ability to scare viewers, I feel that the plausibility of the story, and the character portrayal ties in quite a lot to convince that it’s real, without needing to be. Unfortunately, for Blair Witch, the plausibility of the events seem too far-fetched, and makes it even less convincing when the viewers follow James and his friends into the woods, believing that his sister is still alive after so many years. And everything leading up to the events that take place leave you wondering why anyone would let things progress to the point of carrying through with their actions. While the acting in Blair Witch is a lot more professional that the original, the cast members from The Blair Witch Project were taken through a series of emotionally charged filming techniques, and were actually afraid while filming, making it quite believable. You don’t quite get the sense of that here. We then move onto the scare factor. And this is where it becomes a little more debatable. For those who regularly enjoy a good horror movie, and don’t mind being taken through a roller-coaster of emotions, the film doesn’t present too many scares. For those who tend to avoid horrors, thrillers and many other suspenseful films, there was clear evidence from the screams in the theatre that they were genuinely afraid. Looking at the many different people watching the film, there was a good mix of those being at their wits end, while others were laughing and looking more bemused as to how interactions of the characters played out. And this doesn’t bode well for any horror film.

At no point during the film was I afraid, even though my intrigue was heightened by the suspense. The only time I was properly freaked out was when Ashley was dealing with her leg troubles, which made me more than a little uneasy. 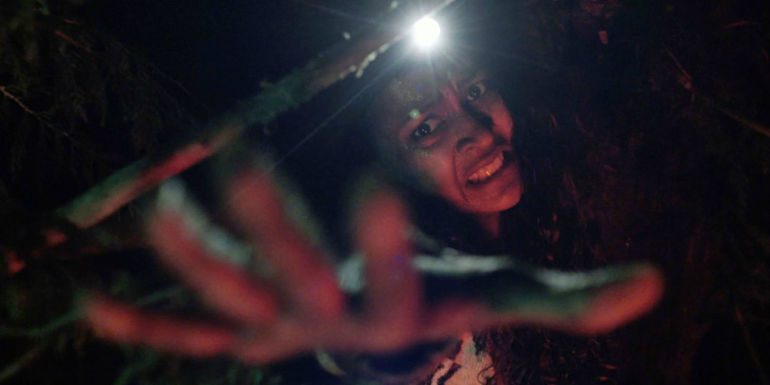 If you managed to watch the original film, you wouldn’t be missing much at all in terms of the premise, filming and scare tactics. And if you’re a fan of the genre, you’re not going to be enjoying the film either. Even without a convincing storyline to backup the film, there are still many films that are able to provide a great scare factor. Blair Witch isn’t one of those.