In the post-Oscars buzz period, it’s worth taking some time to reflect on the films of 2017 and try and understand which ones were overhyped, underwhelming, and which ones we made the mistake of not visiting when they were in cinemas. Blade Runner 2049 definitely falls into the latter category – I myself am terribly sorry that I didn’t splurge on the extra cost to go and see it on IMAX when it was playing there. As the film comes to home release, however, I feel it is my utmost duty as a lover of film and sci-fi to try and convince you to watch it. 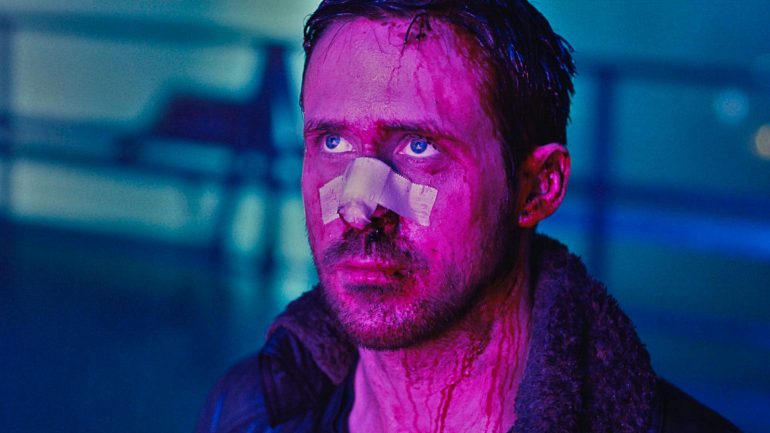 Let’s get all that silly stuff about plot out of the way first – Blade Runner 2049, of course, has a plot, and it has all the requisite twists and turns we would expect, but to describe it in words is to do it a disservice. It only really comes alive when placed in the context of the setting, characters, cinematography and acting (more on those later). Our world is the future dystopia of 2049. Neon advertisements and mega-corporations rule the world. Conflict often sparks between humans and replicants, who are sufficiently advanced androids. K (Gosling) is a Blade Runner, an android tasked with killing replicants that are deemed to be needing to be put down. K is also a replicant himself. While on a job, he comes across the body of a dead replicant, which sets him on a path towards uncovering an entire conspiracy involving Rick Deckard (Ford), the Blade Runner from the original 1982 film, who went rogue and disappeared.

Blade Runner 2049 is indeed a sequel to a classic piece of sci-fi noir, and if you haven’t watched that film you definitely should, but this latest instalment can definitely be watched without catching up with that one. Gosling’s K is the centrepiece of the film, and I hope this doesn’t sound too rude, but Gosling has always had a great ability to seem like an android slowly discovering his humanity. He portrays that sort-of out of touch feeling with the rest of humanity very well, as seen in Drive and Only God Forgives. It works marvellously for the role of an android. Harrison Ford manages to show that his classic charisma and macho leading man skills are not just subject to parody, but have evolved now into those same features as an older man, and he and Gosling play well against each other. The role of the sinister technocrat head of the mega-corporation is played by Jared Leto, another great piece of casting that also plays off of Leto’s sometimes otherworldly aura. Sylvia Hoeks plays Luv, a replicant sent to stop Gosling by force, and she has a performance just as memorable as Rutgar Hauer’s villain in the original film. The film dazzles with its cinematography, which was acknowledged critically and finally won Roger Deakins his first Oscar for that task after 13 nominations. The world feels very lived in – a sci-fi world that never really reached a golden age and instead fell down immediately into grimy noir. Many of the shots look designed to look wonderful as still images but in motion they still create a breath-taking world. All of it is quite plausible for our consumerist society, and there is still no real guarantee that we will not end up like Blade Runner 2049 one day ourselves.

The film is heavy on the deeper questions and philosophy, so don’t come in expecting things to explode and people to be shot for two and a half hours. But for anyone who likes the deeper kinds of things, expect to think about this movie for some time after. It’s never crammed down your through, aside from the taken for granted theme of “what does it mean to be a human?”, but even that is handled skilfully. For instance, K has a programmable AI girlfriend named Joi, and when we begin to understand that we are watching a robot engage in a relationship with what is essentially an app, we can start to analyse their scenes and try to understand what it all means – for romance, for human feeling, for love and sexual attraction, and so on. As for negatives, such as they are – the runtime is a bit long, perhaps especially so for cinema viewings, close to 3 hours, and it could easily have been trimmed a bit. But I liked the world of Blade Runner 2049 and I wanted to stay in it, so I guess it worked for me. Also a minor quibble, but it matters to me – the DVD case in this country is extremely ugly, and does nothing to sell the movie to any first time viewers beyond making it look as generic as possible. The DVD does come with three great special features – 3 short films that are set as filling the gaps between the first movie and this one, and they are worth seeing for any real fan of these films.

Overall, I think everyone who likes cinema should watch Blade Runner 2049 at least once. You may not want to watch it again, but you owe it to yourself to see how a blockbuster can be more than just something to switch your mind off for. It can be spectacular and exciting and thoughtful at the same time.