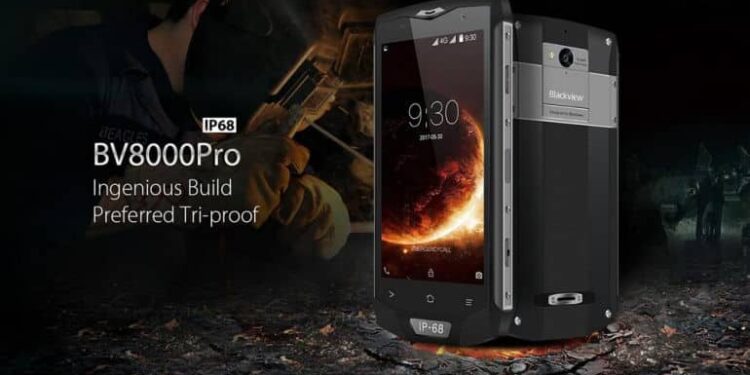 While the world is still fascinated with the thinnest and most premium phones, there is still a huge market for rugged phones. Even Samsung has offered rugged versions of their flagship smartphones, which is why the likes of the Galaxy S8 Active was also released as a rugged form of the S8, despite it already offering an IP rating and a fairly solid build already. In November last year, I reviewed the BlackView BV6000, which was a really solid device, both in terms of the performance and build quality. Almost a year down the line, I’ve received a follow up unit for review, the BlackView BV8000 Pro. BlackView has made some progress in terms of the design on the BV8000 Pro. Not only does it look more grown up, there has been a few minor changes to the design specifications. Overall, the dimensions indicate that the device is both narrower and thinner, although somewhat taller. The updated unit is 2mm narrow, and, a very impressive, 3.6mm thinner. The manufacturers have also shaved 13g from the overall weight, now at 233g, although that’s not a significant amount. While the BV6000 had a much more angular design, cutting off the edges at around 45 degrees, the BV8000 Pro is a lot more rectangular. There’s still a hint of the angular design remaining, although it’s very slight, between 5 and 10 degrees.

The front panel is almost completely glass with a metallic bezel on both sides. The sides house quite a number of buttons. The right-hand side houses the power button on the top, a fingerprint scanner in the middle, and a dedicated camera button at the bottom. The left-hand side has the volume rocker on the top, as well as a dedicated SOS button on the bottom. Holding the SOS button for five seconds alerts emergency services as to your whereabouts in order to send help. It is worth noting that there’s a warning indicating that using this functionality is against the law if not for an actual emergency. There’s also a metal plate on the rear, which houses the dual-SIM and SD card slots, with some of the metal extending to the camera lens. The only other piece of metal is reserved for another plate on the bottom front of the device, which also doubles as placard with the text “IP-68” engraved in it to indicate the devices IP rating.

There’s quite a lot of hardened rubber scattered throughout the unit. This allows for additional grip and shock-absorption. The unit withstood a few drop tests I put it through without so much as an inkling of vulnerability. Overall, the build is quite solid and provides some comfort to owners that it won’t just crack and break for minor drops or other outdoor activities. The design is also a marked improvement over the previous two iterations, looking a lot sleeker, while still having a slight element of it being a rugged smartphone, although not so over the top as to look tacky and out of place. There are some detailings that take a step backward, like the IP-68 logo smacked on the front, which was removed on the BV7000 and looked a lot better for it, as well as a slight rattle on the volume rocker. Other than that, the design is very good for a rugged unit.

The screen has been updated to a 5″ IPS LCD, capacitive panel, protected by the same Gorilla Glass 3. It may be an iteration or two behind the industry leaders in this regard, but there’s enough protection from the side panels. The resolution has seen a bump up to full 1920x1080px at 441ppi pixel density, compared to the 1280x720px on previously reviewed model. There’s also been some work done in terms of picture quality as the image are sharper, while also somewhat brighter. The light sensor above the screen does a good job of changing the level of brightness based on the lighting. I found that this sometimes was a little too sensitive to small changes with a noticeable change in brightness even as you turn the device towards a slightly changed light source. Watching TV also meant the that lighting would have changed constantly as I used the BV8000 Pro. When it comes to the internal specifications of the BV8000 Pro, there have been some improvements yet again. The unit is now fitted with an MTK6757CD/CH chipset (for some reason also known as the Helio P20) from Mediatek, which has an Octa-core Cortex-A53 CPU, which has a clockspeed of up to 2.6GHz. This comes with an ARM Mali T-880 MP2 GPU at 1GHz. The unit uses a Samsung memory module and flash memory, which provides 6GB LPDDR4 RAM and 64GB internal storage. Samsung also provides the camera optics, a S5K4H8 and S5K3P3 for the front and rear, measured at 8MP and 16MP, respectively. Beneath the removable metal plate on the rear you have a dual nanoSIM slot as well as microSD card slot.

Let’s not get things confused, the unit is classed as a mid-range smartphone, so users shouldn’t expect lightning speeds. It is worth noting, however, that standard usage is very smooth and capable. I found no glitches or bugs while using it for normal daily usage. Putting it through its paces towards the extreme, you will notice a slight drop in performance, mostly within certain apps, and not the BlackView firmware itself. It runs most games without any issues, although there are some moments of lag when graphics intensity increases, which is pretty standard across the industry for mid-range devices.

Battery life was reasonable and last well passed the first day, extending into a second. On the days when my usage was rather low, as a result of numerous meetings and the likes, I could have two days of use on a single charge. I did, however, carry the charger with me at all times in the event that it wouldn’t go the distance. Speaking of charger, you’ll have to use the one that comes in the contents, which has an extended plug. Due to the additional rubber around the sides, the USB Type-C port is a lot deeper than normal. Owners will also find a Type-C to USB Type-B, which allows you to connect USB peripherals to the device. The actual charging, however, leaves a lot to be desired. After I ran the battery completely to zero, I wasn’t able to power the unit back on during charge, and waited almost an hour before I was able, as the charging menu always showed as 0%, but when eventually turned out had a reading of 15%. Charging also took a little longer than usual, even with the fast-charging capabilities. One of the biggest concerns many users have had from my previous review was how it compares to mainstream units in terms of software updates. When I used the BV6000, there were one or two upgrades during the review period. The same applied to the BV8000 Pro. As I booted up the unit on the first day of testing, I downloaded a substantial 350MB firmware upgrade. A few days later, a second update was available, this time a security upgrade at 30MB. Also running on the Android 7.0 Nougat platform, the unit’s firmware is pretty update to date, more so than many other mid-range smartphones over the released over the past year or two. While I’m unable to predict the update schedule over the course of the next year and whether it’ll receive the Orea update, judging from the three updates I did receive, there’s an active development community to roll out necessary changes.

In terms of the look and feel, the OS is highly customised and resembles most Huawei devices with its non-home menu approach, not the typical Android experience. The notification menu is a little void of shortcuts, but users do have the option to add a few extra from the default. What I did appreciate was the level of adjustments that are allowed in the Settings menu, a customisation that isn’t always met by other users. There are also a few applications that allow for greater outdoor experiences, while keeping you protected, such that provide warning of earthquakes and tsunami’s in the region, a sound meter, heart rate monitor, and a few other alarms for good measure. The PTT has been removed, which isn’t much of an issue, as there aren’t many other phones that offer the same capability, so it wouldn’t necessarily be useful in any case. The BlackView BV8000 Pro is quite a step up from the BV6000 overall. While many of the changes have been slight across each of the specifications, the design, etc. It all adds up to a more well-rounded device in the end. The Dual-SIM capability also allows users to connect to two different networks simultaneously. This Full Netcom capability allows both SIMs to fully connect to 4G capabilities on both without the need to choose a primary.

At a cost of R6,799, the unit fits in with other mid-range smartphones in the market, with the addition of its rugged capabilities.