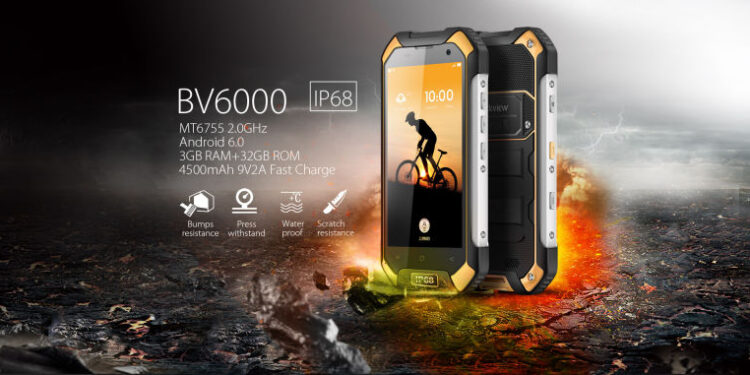 With most major releases days, you often hear the terms “thinnest,” “premium glass,” “aluminium,” or “shinniest.” Well, maybe not that last one all that much. Still, while most phones tend to lure prospective buyers in with looks and glossy finishes. However, there are some smartphones that don’t abide by such rules to make a sale or 2 million. There may not be as big a market for such devices by comparison, but there is still a sizable market for rugged smartphones. One such brand is BlackView, and with the release of the BlackView BV6000 in June this year, it fulfils the niche gap to cater for such requirements.

One false move, a drop, a splash of water, or even a sneeze too hard and you’re looking through the directory for your nearest repair centre to fix your cracked screen. The BlackView BV6000, on the other hand, laughs at such misfortunes as it’s built to withstand some of the toughest conditions we face, more specifically when outdoors. Not only did Rugged SA provide us with the BlackView BV6000 review unit, they also gave the go-ahead for some basic stress tests allowing us to measure its ruggedness.

I often hear or read about how rugged phones aren’t designed to be pretty or good-looking, but I find that view rather closed-minded. Yes, the BlackView BV6000 doesn’t have the same sleek lines with a thin and lightweight frame, but that doesn’t mean to say it’s not good looking. Personally, I like the design of the unit, how each aspect of it is not only intentional but also has some greater purpose other than just its looks. In fact, just looking at the device makes me think of a riding a bike trail through the woods, camping near the river, or a hike up a mountain pass. And that’s exactly where you’ll find the BV6000 in its element.

Don’t be alarmed, then, when you see the dimensions and weight of the BV6000. The unit measures 81×152.3×16.6mm, and it weighs a fairly hefty 247g. All this makes sense, however, once you put the unit to the test. At first, I was a bit sceptical about the first test, the drop test. I started off at a reasonably low height on a slightly softer surface than concrete or tile. After passing through these tests without so much as breaking a sweat, I moved onto the harder surface of a tile, before switching to concrete. Not even a scratch. I wondered at that point how much it would take to cause even the slightest of damage to the unit, but I wasn’t given free reign on trying to smash the unit, and nor would I have felt comfortable in doing so. Safe to say, the BV6000 passed the drop test with ease, thanks to its hybrid aluminium and plastic build, and will be able to withstand sort of ‘natural’ bump it finds itself under, even when outdoors.

The BlackView BV6000 has an IP68 rating, which means that it is water and dust resistant. This means you get to use the unit at up to 1m in depth for up to one hour. The water test proved successful as well, even lying in the sink for a little over the one hour mark. There are a few rubber flaps that seal the port from any moisture leaking in. The unit also has quite a number of physical buttons on both sides, making it easier to use when submerged, such as a dedicated camera button, PTT and SOS buttons. The PTT (or Push-to-Talk) button is supposed to work like a walky-talky, but I wasn’t able to test out the feature, unfortunately, as I did not have another device able to pick up on the receiving end. The SOS button, on the other hand, is very useful when there is an emergency, especially when you’re alone. You can set up an emergency contact, who will receive the SOS message along with your GPS coordinates when in trouble.

Unlike most conventional smartphones, the BV6000 has a door for the dual-SIM ports, which has the BlackView logo on the cover. To open the door you’ll need to undo the flat-head screws. BlackView has you covered with this as well, having included both the flat and Phillips screwdrivers in the box contents. After opening the door, you’ll be able to add your two SIMs, along with the SD card, before closing to seal it away from any moisture that may enter.

The BlackView BV6000 has a 4.7″ IPS screen with a fairly average 1280x720p resolution. For the most part, this may not live up to your average benchmark in 2016, but there are some positive implications for this choice of setup, which we’ll touch on more when discussing the battery life, which I’m sure you’ll be able to guess already.

Despite the lower resolution display, the viewing angles are still pretty good, along with the brightness and direct sunlight view. Colours are also sufficiently bright. Overall, the display quality isn’t bad, but there are a few occasions when you’ll no doubt notice some pixelation when viewing some form of multimedia on the unit, none of which is distracting in the least.

Although not the latest from Corning, the BlackView BV6000 does have the Gorilla Glass 3 fitted, which means that it too can take some sort of a battering before cracking under pressure. BlackView have fitted the Mediatek Helio P10 chipset on the BV6000, which has a Quad-core Cortex-A53 2.0GHz, and a Quad-core Cortex-A53 1.0GHz. The Octa-core CPU means that the unit is capable of efficiently switching between the two clusters to reduce the power footprint when not needed. The CPU is paired with 3GB RAM and 32GB internal storage for good measure. This may be below your average flagship device, but given its mid-range price tag, that’s quite a lot of bang for your buck. The Mediatek Helio P10 is rated in the same category as the Snapdragon 617 fitted to the Moto G4 and Moto G4 Plus, although the P10 easily outperforms it in benchmark tests.

I mentioned earlier that the BV6000 has a purpose built frame, and while it held up against our stress tests, there’s an added advantage to the bulk. BlackView have fitted a 4500mAh lithium-ion built-in battery thanks to the added space available, which means that it can go for quite a while between charges. Another aspect of the attention to detail is how it built everything around eking out additional battery life, from the 4.7″ screen to the display, which only has a 720p resolution, to the efficient CPU. This means that the unit is capable of lasting quite a number of days on light use, when you’re out in nature, away from any charging post.

In addition to the IP68 rating, there are also a few useful features built into the BV6000, including a pressure sensor that good information to mountaineers, such as height above sea-level, and atmospheric pressure.

While I am able to overlook some of the features of the phone as not being up to par, there are some that just don’t cut it in 2016. The camera is one of those. Fitted to the rear you have Omni Vision’s 13MP camera (which can be upscaled to 16MP), with a 5MP front-facing selfie camera. In perfect lighting, with a still image, you’re able to snap quite a few decent photos with the BlackView BV6000. In addition to this, the camera app isn’t great either. It doesn’t have the best of features, with no manual mode in site. What you do get is PIP, panorama and normal mode, along with a few options such as exposure, brightness, and white balance.

What does stand out from any other feature on the camera and app is its shutter speed. This means that you’ll be able to capture moving images without too much motion blur, which is a great aspect for outdoor photography. You won’t be able to get great high-res prints from the rear-facing camera, but they’ll be sufficient for sharing on social media showcasing your latest outdoor achievement.

One of the first checks I always perform on any new device is the software version. To my surprise, the BV6000 runs on Android 6.0 Marshmallow, and while most smartphones released this year will sport the Marshmallow branding, there are a few Lollipop devices floating around from major manufacturers. The software runs quite a stock build of Android, although it does get rid of the app draw in favour of a Huawei-esque approach. I’m not a big fan of the home screen setup, as I often run a clean home screen, void of any app shortcuts apart from the menu apps.

The capacitive buttons aren’t conventional for 2016 Android either, opting for a menu, home and back buttons, instead of multitask menu, home and back. The icons on the BV6000 are also slightly different, with all pre-installed apps getting a themed design. It is a bit frustrating when the theme isn’t translated across to downloaded apps, which tend to disrupt the overall flow and intention of the themed approach. You can circumvent this by downloading a custom launcher from the Play Store, but may not be a solution to everyone. The notifications and toggles are fairly straightforward if you’ve used Android in the last two to three years, with the addition of the orange and grey theme (toggle on is orange, toggle off is grey).

BlackView have incorporated a number of off-screen screen gestures as well, such as single or double tapping the screen to perform a function or open an app. You could use it to go straight into the camera app, but there’s already a dedicated button for that.

The BlackView BV6000 isn’t the greatest smartphone in terms of features and specifications, but it has a few good aspects and attention to detail that are lacking from many other flagships of late. The purpose built, rugged phone can easily withstand the bumps and mishaps you may have along the road, and is able capable of rolling around in the dirt while you’re camping or mountain biking.

At a cost of R5,150 from Rugged SA, the pricing is very competitive amongst other mid-range phones that don’t offer the same outdoor capabilities. The BV6000 isn’t a smartphone for everyone, but for those who frequently partake of outdoor activities, the unit is an ideal match for your lifestyle, and doubles up well as a daily driver, especially given its extended battery life.

You can purchase the BlackView BV6000 from Rugged SA.