Last week FoS reviewed the BlackBerry Z10, a smartphone with some potential, although nothing near game changing. For years, BlackBerry has owned a very niche market space simply based on their service offerings and neither their devices nor OS itself. Now with those services taking a step back the free-to-use model being dropped, it is the OS that is expected to move the brand forward. As promised, we’re taking a closer look at what the BlackBerry 10 OS has to offer to loyal fans, and to the rest of the world looking to make the jump. 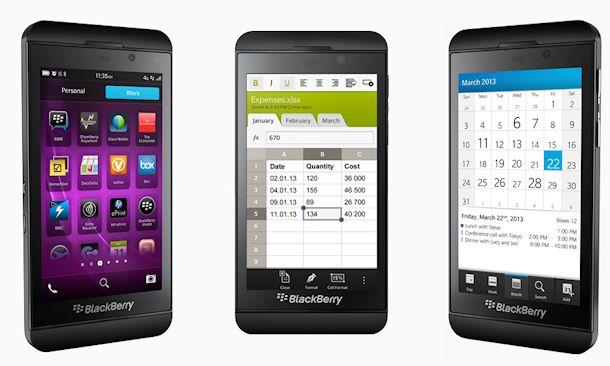 As with all modern smartphones, the layout and UI play an important role to users. Having something too complicated and you may lose users simply looking for the basics, while having something too straightforward and unimaginative loses the more tech-savvy users looking to get the most out their smartphones. BB10 offers nothing major in terms of its looks, but the layout has a slight change to that of the conventional. When setting up the device for the first time, the user is faced with the recently mimimised setup app, which then serves the purpose of familiarising the user with the layout. For first time users, the app won’t be closed immediately, and rather find themselves scrolling to the right, which slides in the app drawer, containing 34 pre-installed BB apps (to be discussed). Swiping back to the left, back past the task-switcher drawer, is where you’ll locate the BlackBerry Hub. This is quite a useful addition to the main menu, and will be discussed later. 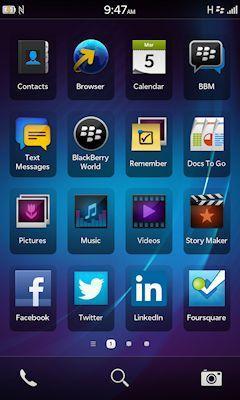 Since BlackBerry removed any physical inputs with the Z10, improved gesture-based support was an essential part of BB10, and expected to perform much better than those on previous BB7 devices. For anyone who has ever used an Android or iOS smartphone, these gestures are pretty common, while smooth animations are aesthetically pleasing. For BB users, however, there may be a need to spend a few minutes with the device before it becomes comfortable. Although we’re not saying anything less for current BB users, as with any new software, there is always a slight learning curve.

One of the more key gestures is the swiping up from the bottom logo, which activates the operating system’s multitasking features, unlike Android or iOS that makes use of a home button to perform the same function. When receiving a new message or update, swiping up and to the right minimises the currently open app and switches directly to the BlackBerry Hub. Although this too takes some getting used to, it is quite a useful feature to skip directly to new messages, mails and other such notifications. Speaking of multitasking, switching between apps is as simple as a simple swipe, as mentioned previously. A separate task-switcher drawer is then added to the main menu, which displays a grid of currently running apps, with a possibility of running eight separate apps in the background. When opening the ninth app, the earliest opened app will then be closed and removed from the list. Apps can also be closed by pressing the ‘x’ button that appears alongside each of those opened apps. So this is not the most complicated of multitasking features, but very effective and easy to use. 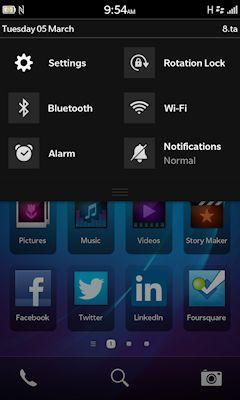 The BB Hub is designed to collect all your messages, emails, missed calls, Tweets, Facebook and BBM updates, notifications and the likes into a single corner of your BlackBerry 10 device, making it easier to stay on the pulse. BlackBerry themselves has placed so much emphasis on the Hub that is available from any app and in any situation on your device by means of the ‘swipe up and to the right’ gesture.

In theory, this is a great and useful feature for users, but it can quickly, and surely, spiral out of control as more accounts are linked. Imagine the situation whereby you receive 10 work emails, 10 SMSes, 10 Facebook updates and 10 Tweets. It then becomes quite frantic sifting through important notifications you need/want to attend to. Thankfully, though, the Hub is also split into the several accounts you have linked to the device, and is easily accessible via the ‘peek’ functionality. Simply scroll to the left once again, and select the account for which you only wish to see notifications. When using the ‘swipe up and to the right’ gesture from within another app, you will then land on the account for which you set earlier. You can then view other notifications via the ‘peek’ functionality again when they are received. 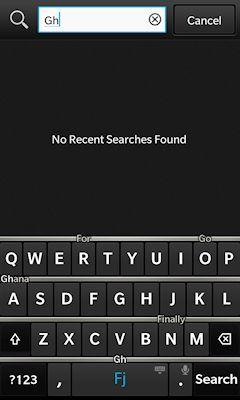 Since removing the physical QWERTY keyboard, BlackBerry had to reinvent their keyboard app, as it had been slated for the lack of a user-friendly keyboard on previous touchscreen BB devices. The good news for BB10 users, then, is that the experience has been sdrastically improved, and something that one can live with on a day-to-day basis. The layout is comfortable, the keys are reasonably sized and spaced, while the ‘chrome’ bars between the keys are meant to mimic that of current BB QWERTY-based phones. What makes the keyboard unique is its predictive text, which displays predictions on individual keys based on which word you might type next. The “AI” gathers information from your previously typed emails, collecting patterns of your frequently used words. To use the predictive word, simply swipe up from the key where the prediction is found, and it adds it to your message. In some cases, it can predict a full sentence without the user having typed the start of individual words.

Despite its usefulness, it does take a bit of getting used to, and users can often find themselves having to remove words that were predicted as they accidently swiped them in. The trick to removing words is as simple as getting them there in the first place. Swiping from right to left will remove the previously entered word without having to use the backspace key. What’s also tricky, and hard to explain, is that the key it previously predicted a specific word for may change from when you used it previously, so being accustomed to using the same key for the same predicted word doesn’t happen. Die hard BlackBerry fans will argue that it still doesn’t replace the physical keyboard, in speed and accuracy, but I can go as far as to say that it might be the best stock keyboard available on any device.

I’ve taken a handful of the more important apps and elaborated on each:

The camera has a dedicated icon on the unlock screen as well as on the main interface. The layout is very straight forward, with only two icons available on the capture screen; one for settings and one to switch between standard photo, video and Time Shift. In the settings menu, the options are limited too, allowing the user to switch cameras, change shooting mode, change scene, select flash options and change the aspect ratio. Taking a photo can be done by touching anywhere on the screen, as well as any physical buttons. This makes it tricky to select onscreen options, as any missed press results in a photo being snapped. In order to shift the primary focus rectangle, you have to press and hold the focus area until it changes colour, indicating that it can now be moved.

The Time Shift feature allows the user to capture photos of a group of people, but with a twist. The camera actually takes a burst of photos, allowing the user to select a face within the photo and ‘rewind’ the time for the best image of the selected face. Faces are detected automatically, although there are some instances when an individual’s face won’t be detected as such. This is especially handy when people randomly blink or move during a snap, which means you can ‘rewind’ their faces to a previous, better point in time. You can then save the best photo of the group to your device. Users also have the ability to perform basic editing on photos such as crop, rotate and colour adjusting. 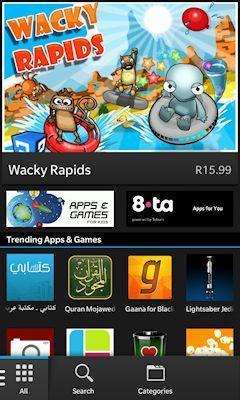 The BlackBerry World is an app allowing users to purchase other apps, as well as music and video content, while the latter is not yet supported in South Africa. At launch, BlackBerry World included some 70,000 apps for BB10, while BlackBerry were eager to go on record claiming that the most important apps were already ported, Angry Birds Star Wars being just one of those. After some time searching through apps, very little ‘must-have’ apps were found. In addition, quite a number of apps were paid-for-apps, making it harder to select apps I really wanted.

Although there is a clear lack of available apps in BlackBerry World, the same cannot be said of the downloadable music content. There is quite an extensive list of premium music available, from single tracks to full albums, some of which are also available a 30-second ringtones. Comparatively, though, the prices for digital albums are higher than that of the Amazon MP3 Store or iTunes. Currently, there isn’t much being said about downloadable video content, but based on US and UK markets, videos such as series and movies are priced more reasonably. 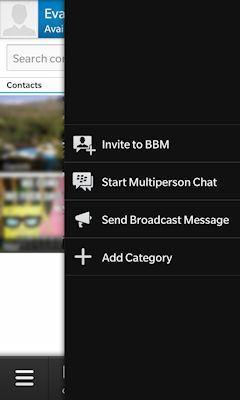 The much talked about BBM is still available on BB10, although the service may be charged by some network operators. Features for BBM hasn’t changed much, but have seen a refresh in terms of looks. Voice and video chat are also still available, although much easier to setup, while providing better quality of service. Sharing files across devices has been streamlined, while it also allows users to share their current screens, similar to viewing presentations in the same manner.

Mobile browsing has become an important factor in the world of smartphones, as in recent times mobile browsing has overtaken that of desktop browsing. The Browser app pre-installed on BB10 performs admirably, providing multi-tab support and as well as Flash, although disabled by default. Other features include adding bookmarks, full history, a number of useful settings such as privacy and permissions, a reader and a download manager. The Browser makes use of the Bing search engine, which means that the URL bar doubles as a search field, much the same as other desktop browsers.

Apps such as Weather, Clock and Compass are both minimalist and professionally put together, making it enjoyable and easy to use. Most apps have a certain quality about them, some more than others, while a few still need some work, an example of which would be Maps. 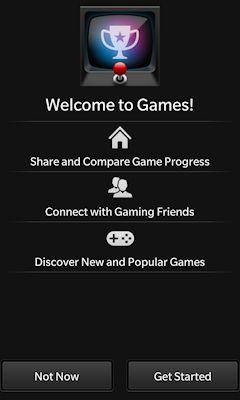 One cannot simply judge BB10 as is, as there are many aspects that are still in its infancy; its new BlackBerry World apps for one. But after many promises and delays, one would have expected that BlackBerry 10 would hit the market with a boom, with an abundance of quality apps, which hasn’t happened. Be that as it may, BlackBerry World is growing by the day, much the same as Google Market and Windows Store did in their early days.

The BlackBerry 10 OS, then, is a work in progress, evidence of which was made in the fact that BlackBerry will release the first update before the end of March, only two months after being announced. If this was a new OS from a start-up company, it would be a seriously good first time effort with a sense of treating it as a new born, teaching it to walk and talk. The fact that it comes from BlackBerry makes it less impressive, while still carrying some hope for something better and more polished in the months to come. Again, as with the BlackBerry Z10, I wish to see BB10 OS grow into something that competes with the giants of mobile OS, which, unfortunately, it doesn’t at this stage.