Black Panther Slash and Strike Figure Review – What Are Those? 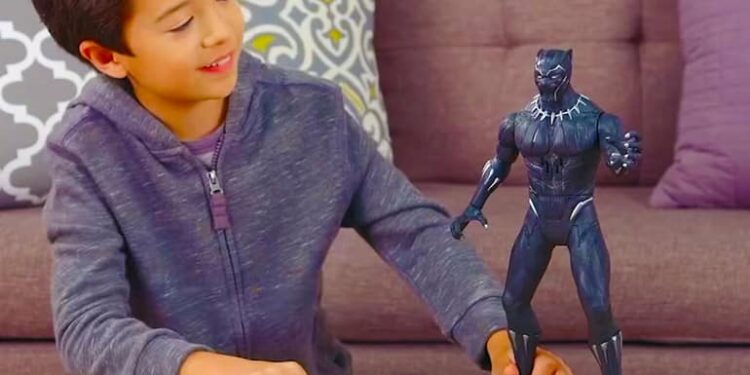 In the past, the mention of a superhero character called Black Panther would mostly elicit blank stares and a tad of confusion. The protector of the advanced African country Wakanda has never been as popular as his Avengers counterparts, especially when it comes to his mainstream appeal. Well, that has changed completely since the character’s introduction into the Marvel Cinematic Universe. Not only has T’Challa, aka Black Panther, become one of the most beloved members of the Avengers, but he has firmly cemented himself as one of the most important and interesting characters too.

With the release of the critically acclaimed Black Panther film, Marvel has once again shown how they are able to not only bring their characters to life on the big screen but also stay true to what made the character so cool in the comics. Of course, when I was given the chance to review one of Hasbro’s latest figures based on the film, I was excited to see if the figure would be given the same care and attention as the character on screen. When the Black Panther Slash and Strike figure arrived at my doorstep I was geared and ready to rip this bad boy out of his packaging. But first I had to give my curious daughters a quick overview of who this black-clad superhero was and how he fit into the Marvel universe. After a quick explanation, followed by an overwhelming amount of questions which seemed to become more with each answer I gave, I was finally able to remove the 13-inch figure from its packaging.

For those who grew up in the 80s’, one of the must-have toys was the 3.75-inch G.I. Joe figures, which seemed to dominate the toy market at the time. One of the figures that formed part of the range of toys was a completely black on black (from head to toe) ninja called Snake Eyes. It’s a well-known fact that Hasbro decided not to paint the figure in order to save costs as there was no need to paint the figure after being removed from the mould. And while Snake Eyes quickly became one of the most popular toys in the range, his completely black body meant that he lacked a lot of the detail found in some of the other figures. How does this tie into my review of the 13-inch Black Panther Slash and Strike figure? When I initially removed the figure from its packaging I was concerned that Hasbro might have gone the same route they did with Snake Eyes so many years ago as Black Panther (as the name suggests) is mainly covered in a completely black costume. I was, however, pleasantly surprised to see that the toy manufacturer included quite a lot of textured and embossed details on the figure’s black costume which accurately mimics the one worn by actor Chadwick Boseman in the film.

While most of the Black Panther Slash and Strike figure is completely black, which made me step on it quite a few times when walking through my daughters’ bedroom in the dark, there are a few silver accents painted on too. Most of the little silver details are well-painted with only one or two places where overlapping is visible. I especially like the silver painted areas on the figure’s face which helps add some detail to it. What does seem strange is that some of the areas which are painted on the front of the figure are not painted on the back. This is especially obvious when looking at the figure’s boots which have silver painted elements in the front but the ones at the back are unpainted.

While I was quite happy with the Black Panther Slash and Strike figure’s overall look and quality of the paintwork, the same cannot be said for its articulation. The first thing I wanted to do when I got my hands on the figure was to pose it so that it seemed like he was about to strike. My hopes were soon squashed as I realised that the figure had a surprisingly limited amount of articulation.

Don’t get me wrong, I wasn’t expecting a crazy amount of movement from the figure, but this figure is rather limiting. The only articulating joints are on the shoulders, wrists and head. There are no articulation joints at the elbows, knees or even hips/thighs which means that, after a hard day superheroing, Black Panther can’t even sit down and relax. I would have preferred if the figure at least had some articulation at its hips/thighs as this would have made playing with it much more enjoyable. As it is, T’Challa can now only hover across the toy-strewn battlefield. That said, the real drawcard are the figure’s two main features: the ability to slash (and strike) and 15 sound effects. When twisting the figure’s midsection and then releasing it, it activates a light on the figure’s chest accompanied by a slashing sound. The area that lights up is well blended into the suit and I only realised it lit up after activating the figure’s slash function. This slashing motion works in both directions.

The second feature is activated by pressing the fang shaped button below Black Panther’s head. This not only activates its chest light but also lights up the figure’s eyes (which looks really awesome, especially in the dark). This display of light is then followed by a battle sound effect. By pressing the button again, you are able to cycle through all of the sound effects. These effects can also be activated by tapping the figure on its chest, simulating being hit in battle. This is an interesting feature and one my youngest daughter enjoyed the most, which lead me to realise that the figure was rather durable and was able to take quite a bit of punishment.

The Black Panther Slash and Strike figure, while sorely lacking in the articulation department, is saved by it’s light up and sound effects which are seamlessly integrated into the figure. It’s a figure which is not only able to take most of the punishment a kid can throw at it but would also look good being displayed next to your other figures. Hasbro has kept upping the bar when it comes to the amount of detail and features they have included with their toys and I can’t wait to see what they will be releasing with the Infinity War set.