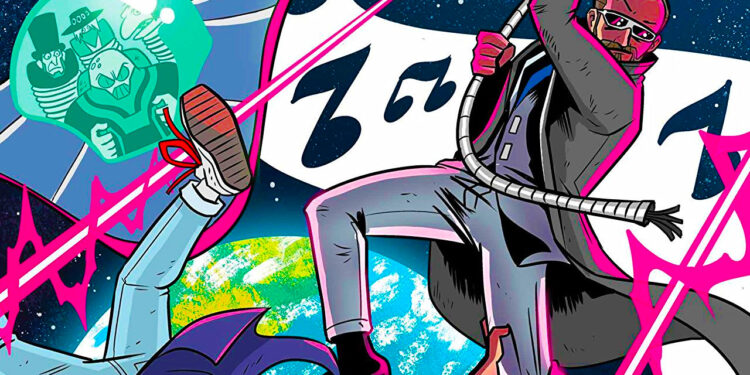 After a most triumphant first issue of Bill & Ted Save The Universe, the standard drops down here in a totally bogus way. Bill S. Preston, esquire, and his excellent friend “Ted” Theodore Logan have a problem. As the Wyld Stallyns their music is meant to bring peace and harmony to the universe in the very near future. Except they need to go on tour to make that happen, and the tour will take ten years. Throw in an overzealous lawman who believes that their destiny is also robbing people of their free will and the return of Bill and Ted’s mothers, who have been galactic emissaries of Wyld Stallyns, and things get complicated. Plus, of course, the tour would take Bill and Ted away from their beloved princesses and their kids. Oh, and they have to go on trial, too!

There’s still plenty of great little Bill and Ted moments, but the focus is taken away from them as we learn about their mothers. Things get all weird and kind of mushy, with too much exposition and no real emotion. It’s hard to feel any kind of connection with their mothers to begin with, and this issue answers questions which nobody ever really wanted to ask anyway. Plus, Rufus looks like a complete dillweed here, and that’s not on.

Rufus has been a fan-favourite character from the beginning. It’s okay for this issue to say that maybe he’s a bit biased when it comes to Bill and Ted and that his judgment is clouded sometimes… but to have him look like a dork who’s been screwing over the Stallyns and lying to them is just not on. Yes, there’s probably a good reason for this in the story, but seeing Bill and Ted feeling P.O.’d with him does none of them any favours. There are few laughs to be had in the first half of Bill & Ted Save The Universe #2, which again makes it seem a bit forced and off-track. Even Bogus Journey’s more serious moments had an element of darkly sly playfulness to them, while here they’re heavy and dull. The Stallyns are more reactive than proactive and, as such, they mostly just stand around while events unfold before them.

Thankfully, the second half of this issue manages to pull off some rather neat little gags which make up for the earlier flat tone, and the idea of Bill and Ted being put on trial is typically larger than life for the characters. Amazingly, some of the most amusing moments come from the Stallyn’s fathers and Ted’s brother Deacon, along with DeNomolos who struggles to be the voice of authority.

There’s still real promise here and fans should still enjoy this issue regardless, but sadly it isn’t quite Bill & Ted at their best.