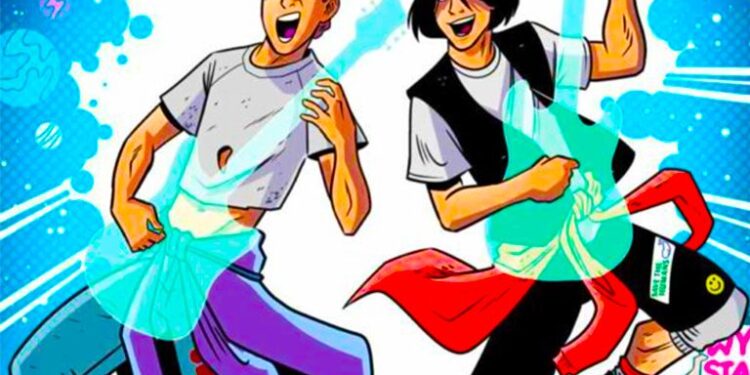 1989’s Bill & Ted’s Excellent Adventure and its sequel, 1991’s Bill & Ted’s Bogus Journey, are little gems of pop culture brilliance… and the smartest, most entertaining “dumb” movies you could ever hope to see. These two time, space and afterlife-travelling morons were big on heart, huge on fun and tiny on brainpower. And, amazingly, their stories still have a huge cult following even now. There have been video games, comic books and even cartoons… and now comic books again! On an alien world, war is brought to an end by the most excellent music of the Wyld Stallyns – better known as Bill S. Preston, esquire, and his most triumphant friend “Ted” Theodore Logan. Except something is wrong here, terribly wrong. Meanwhile, Bill and Ted face down Vlad the Impaler before arriving at their surprise birthday party. Ominous signs and portents abound, and Ted’s brother Deacon’s date turns out to be an alien in disguise! Before long, they find themselves facing an intergalactic crisis of non-non-non-non-heinous proportions…

The premise here is typically Bill & Ted in that it appears (on the surface) to be dopey fun, but it actually raises some highly intelligent questions. The music of the Wyld Stallyns is meant to bring about universal peace. But is it supposed to? Does their music create peace by force, robbing everyone of their free will? And how much of a toll does it take on Bill and Ted’s personal lives to make this happen? Since, as Rufus – their friend and mentor from the future would point out – history has already been written, are they creating a paradox if they choose to do their own thing instead of what the timeline demands of them? It’s a tricky situation they find themselves in, and as always they lack the intelligence to truly understand the complexity of it. That’s the joy of it. What they do know is how to have fun and do the right thing, and that’s exactly the attitude that this comic book succeeds in getting across.

This is one of those comic books where you instantly get that feel-good factor and find yourself reading it like you’re experiencing the movies. You can imagine Bill and Ted’s dialogue coming out of the mouths of actors Alex Winter and Keanu Reeves. You can imagine seeing this story played out on screen. For any Bill & Ted fan, it’s like the next best thing to the originals.

Unfortunately, there’s a slight downside to all of this. The storytelling seems a little unfocused early on, and the art isn’t exactly the greatest. It might capture the spirit of Bill & Ted, but it isn’t Bill & Ted – if that makes sense.

Strictly speaking, Bill & Ted Save The Universe #1 is one for the fans. If you love the films, you’ll love this. Now be excellent to each other… and party on, dudes!