There are bad movies and then there is The Room, a film so bad, so painful and so inept, it’s unworthy of calling itself a bad movie. No, my dear friends, this is truly the worst movie ever.

If Troll 2 was dubbed the featherweight champion of bad movies, The Room would certainly be the heavyweight winner. It’s almost impossible to comprehend and could possibly pass as an alien experiment (using human beings as their pawns) gone completely wrong. But don’t let any of these comments discourage you, this is a film you have to see.

Dubbed the Citizen Kane of bad films, this cinematic tour-de-force is possibly the worst acted, worst written, worst directed, worst scored and worst produced film I have ever seen. The Room, a title that has no bearing on the actual film, is a filmic holocaust so bewildering, so melodramatic, so mysterious and so magically wrong you’ll be hypnotised and mesmerised by its ability to succeed as a bad film. Put it this way, if you gathered every bad filmmaker in the world into one room and asked them to pen a script it still wouldn’t be half as bad as Tommy Wiseau’s The Room. Strangely, it’s impossible not to like the film and you’ll end up watching it time and time again – if just for the belly aching laughs. Johnny: Thank you, honey, this is a beautiful party! You invited all my friends. Good thinking!

Behind the steering wheel of this great blunder is Tommy Wiseau, a strange personality who wears the hat of actor, director, writer and producer. Tommy doesn’t live in a world where people communicate normally I’m afraid and, as a result, his screenplay is filled with the most bizarre dialogue known to man.

Every second conversation is initiated with the words “Oh hi!” and almost all the dialogue is incomprehensible. The script is also characterized by numerous inexplicable mood changes in characters within the same scene. For example, Johnny (Wiseau) could enter a scene angry but change his tone completely when greeting one of his friends.

While Wikipedia describes The Room as an American independent romantic drama film, I double dare anyone to attempt to categorise this film into any genre, besides stupid. Despite all this, the film has gone on to develop cult status, resulting in sellout showings across the USA and has even inspired a video game, a travelling stage show, and a book. Johnny: I kill you, you bastard!
Mark: You couldn’t kill me if you tried.
Johnny: You betrayed me! You’re not good. You, you’re just a chicken. Chip-chip-chip-chip-cheep-cheep.

Attempting to explain the plot may prove futile, but I’ll try. Tommy Wiseau plays banker Johnny, who is in a rocky relationship with Lisa. She is cheating on him with his best friend, Mark, who spends most of his time chatting and playing football with Johnny and their friends. In between the ten-minute long sex scenes, there’s a drug lord, a bitter old woman, a psychiatrist, an overgrown perverted boy and a few other oddball characters are thrown into the mix.

Peter: People are people. Sometimes they just can’t see their own faults.

Someone out there thought it was a good idea to give Balki from Perfect Strangers a camera. Bad idea. This is a horrible attempt at filmmaking. IFC.com described Wiseau’s speaking voice in the film as “Borat trying to do an impression of Christopher Walken playing a mental patient.” The Guardian called the film a mix of “Tennessee Williams, Ed Wood, and R. Kelly’s Trapped in the Closet”.

I have my own theory regarding the film’s creation. I’m certain it was created by aliens trying to mimic human beings. It’s the only logical explanation. Only once every millennium, when the planets all align, does something this bad come along. You’ve got to see it to truly believe it!

The good news is that those who loved this film can look forward to a movie based on the making of The Room. Based on Greg Sestero’s best-selling tell-all, The Greatest Bad Movie Ever Made, The Disaster Artist starring James Franco, Dave Franco, and Seth Rogen goes behind the scenes to show us just how this disastrous masterpiece came to be.

Mark: So can I come in tomorrow, like late afternoon?
Johnny: Absolutely. 8:00?
Mark: Great!

P.S. I’m pretty sure a few chicken were harmed in the making of this film. 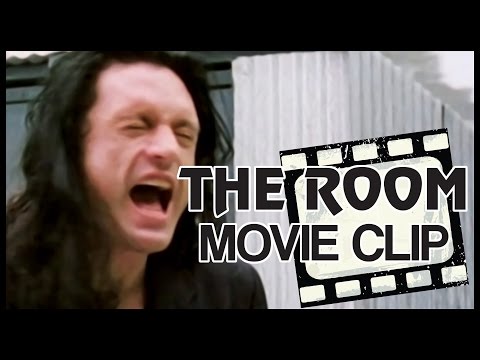