If The Room is described as the Citizen Kane of bad movies, then Birdemic: Shock and Terror could be likened to The Godfather of awful films.

Just when I thought I had truly found the worst possible film in Tommy Wiseau’s The Room, Birdemic comes racing, trumpeting, on a white horse, banner in hand, proclaiming it’s victory as the “worst movie ever”. It’s a monstrosity that fumbles through every conceivable error. In fact, “monstrosity” might be a word a thousand times too generous for the film’s description. Even after several viewings, it’s still hard to mentally digest. If you love bad movies, let me introduce you to the reigning king… Dr. Jones: It’s the human species that needs to quit playing cowboy with nature. We must act more like astronauts, spacemen taking care of Spaceship Earth.

The title, Birdemic: Shock and Terror, speaks volumes of what you can come to expect, but nothing, no nothing, can fully prepare you for the full shock of James Nguyen’s ode to Alfred Hitchcock’s The Birds. Even if you imagine putting the worst movies you’ve ever seen in a blender, mixing them thoroughly, the results are still guaranteed to be better than what we are presented with here. You’ll find it hard to believe that something this inept exists and, even more so, that it wasn’t purposely created to be inept. Surely, no average mind could possibly conceive such a thing? The drunken cinematography, the horrific acting, the awful dialogue, the pointless story, matched to the horrendous CGI and VFX (which include digital eagles and vultures that look like GIF animations or sprites), all inspires real jaw-dropping moments. There are stronger words to describe Birdemic, but none of them are very Christian.

Rod: Hey, look! There’s an old guy on the bridge!

Essentially, the film is split into two parts. The first forty minutes is reserved for the dreary boy-meets-girl romance between Rod (Alan Bagh), a computer software salesman, and Nathalie (Whitney Moore), a lingerie model. As they hit it off, they both suddenly reach surprising success in their careers, with Rod making a million dollar deal and Nathalie landing a Victoria Secret deal (yeah right!). The mediocrity lingers on and just when you start to suspect that you might be watching the wrong film, the badly rendered birds finally attack, amid unbearable shrieking noises.

One absurdity follows another and soon the couple is fending off nature’s cold revenge on human kind (in the form acid-spitting eagles and vultures). Along the way, they meet a tree hugger (named Treehugger), adopt two abandoned children, rescue strangers and fend off the birds with the use of coat hangers and guns that look like toys.

Why they don’t just remain indoors is beyond my understanding. Instead, the group is constantly venturing out to public places – like the beach.

On the flip side, it’s incredibly funny seeing people getting killed by the birds. Most of it is completely absurd. In one instance, a lady gets killed while trying to take dump in the middle of nature (a metaphor for the film’s theme perhaps?). 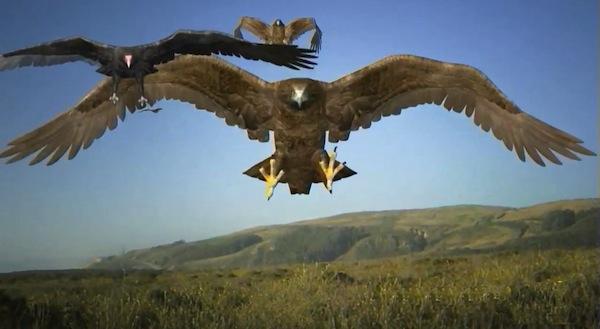 Tree Hugger: I hear a mountain lion! I gotta get back to my house and you better get to your car!

It’s hard to believe that this film has a 10,000 dollar budget. It all looks like it was shot in someone’s backyard for much less. Birdemic continues to prove my theory that aliens have succeeded in brainwashing a handful of Hollywood directors in an attempt to take over the world. James Nguyen is definitely one of the poor directors infected. How else would you explain this mindless twaddle?

While the horror crowd has fallen in love with this doo-doo, Birdemic is only recommended to those who enjoy good long laughs. Take a bow James Nguyen. You have successfully created the shocking and terrifying film the title suggests.

Variety reported that “Birdemic displays all the revered hallmarks of hilariously bad filmmaking: inane dialogue…miscued music, godawful sound…and special effects that simply must be seen to be believed: birds dive-bombing and exploding in red-and-yellow poofs of smoke, and clip-art eagles, crudely pasted on the screen, with only their wing tips mechanically flapping.”

It’s hands down one of the worst movies ever!